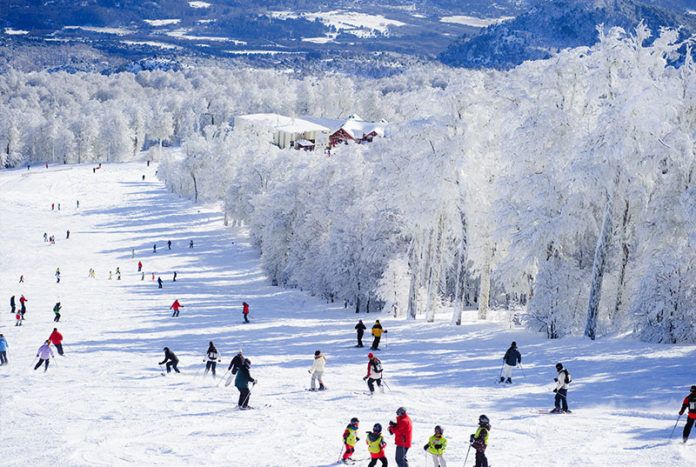 Not only because of its modern infrastructure, but also because of the quality of its service, Chapelco Ski Resort is the ski center where you will, without a doubt, enjoy the most unforgettable holidays of your life.

Experience the joy of practicing winter sports in unique scenarios and perfectly groomed trails. The ski stops will then welcome you to a relaxing break after an intense day of skiing.

Nestled by nature, the surrounding woods protect the trails, sheltering them from the wind while making the snow perfect for you to enjoy an out-of-bounds experience in these incredible landscapes.

Chapelco has 12 lifts, among which you can find “Rancho Grande”, a high-speed quad, unique for these latitudes. Since put into action, it has increased by 30% the number of transported passengers.

The resort’s lift systems has changed radically, lifting 18.000 skiers per hour and avoiding delays in peak hours. Chapelco mountain has a complete height of 1.980 m above sea level. The longest run is 5,3 km and its slope gradient ranges from 20 to 45 degrees.

Its more than 22 trails offer a wide range of levels of difficulty, and its more than 140 hectares open for skiing are an attractive alternative for all demands, regardless of the user’s skills.

Chapelco is the first and only ski resort in the country to generate renewable energy.

it began producing electricity with photovoltaic solar panels at its Pisteros and Patrol station located at Platform 1700m,

generating the energy needed to power the electrical load of all the equipment used by the patrol station.

In addition, Chapelco installed solar panels with a power of 5,200 watts, in three micro power stations (at the base, ticket office and platform 1600) with a storage and backup system, which provides solar energy to the entire data, communication, information and services system to skiers even in the event of grid failures.

The Adapted Ski School (EEA) offers the possibility of practising winter sports such as skiing, snowboarding, Nordic skiing, snowshoeing, among other activities to people with disabilities.

The EEA depends on the Ski and Snowboard School of Chapelco Ski Resort and has achieved a high level of excellence in the instruction of Adapted Skiing thanks to its qualified instructors and technical devices.

Swing your arms at Mini Golf in Chapelco

This attractive entertainment is a miniature version of the well-known sport of golf. There are 9 holes where you can share a good time with the kids practising your aim with your club.

Concentrate, calculate the distance and with an accurate shot go through the 9 holes in the Mini-Golf of the Chapelco Verano Mountain Park.

Biking with up to 8 different tracks for all levels

The Bike Park offers 8 different circuits with varying degrees of difficulty and is a summer favourite.

The activity can be enjoyed with free passes for one or two consecutive days, six alternate days (Flexipass), monthly or seasonal passes.

With their own mountain bike and helmet, bikers of all levels can take advantage of the geography of trails and circuits that go deep into the forest.

This complex located at the base of the Chapelco ski resort, has 8 cabins, each one distributed on two floors. The ground floor has a living-dining room, kitchen and toilette.

Upstairs there are 2 bedrooms and 1 complete bathroom.
They can accommodate up to 6 people.

The country house has its own rental and lifts that communicate with Chapelco. It includes the necessary services to enjoy an unforgettable stay: high speed Internet connection, Direct TV and 24 hour security. In Villa Las Lengas, nature is waiting for you!

Miradores del Lanin is an exclusive 3-star complex composed of 6 cabins located in the heart of the mountain at 1500 metres above sea level in the Ski Village Las Pendientes.

Among the accommodations in Chapelco, Miradores del Lanin stands out for being the only cabin complex in Las Pendientes that has resident owners with all-terrain vehicles and is open all year round.

Guests can drive their own vehicle to the door of their cabin in Chapelco even during the winter season.

Nestled in the middle of the Lenga forest, at the foot-slopes of the Chapelco ski resort Dandelion is a cosy house with all the warmth of a mountain cabin, located in the gated community of Las Pendientes.

Equipped with its own ski lifts and slopes, Las Pendientes is located on Chapelco Mountain and is an ideal place to enjoy skiing and nature with the whole family.

The two-family house is equipped to make the most of your holiday. Relax in the sauna and jacuzzi after a day spent outdoors. Guests are also provided with daily maid service and a dishwasher for a comfortable stay in the mountains.

✅ Chapelco has been voted as the Best Ski Resort in Argentina since 2015 at the World Ski Awards.

✅ The resort had hosted the 1st International Paralympic Championships in 2015.

✅ Chapelco is the first and only ski resort in the country to generate renewable energy.

✅ Home to a total of 24 ski runs distributed all along the resort throughout 25km of skiable domain.