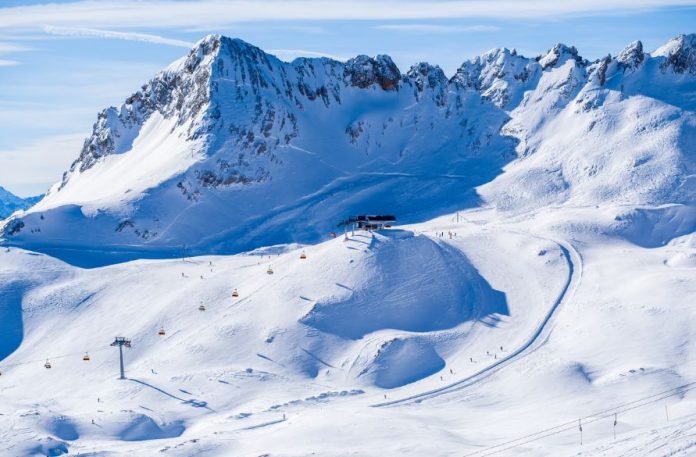 In 1936, this german skiable domain close to Austria, Garmisch, Partenkirchen and Zugspitze,  has hosted the Winter Olympics and the World Ski Championship (1978 and 2011).

The pistes of Garmisch / Partenkirchen / Zugspitze offer a wide variety of descents thanks to ultra modern ski lifts. Mount Zugspitze’s sector will probably surprise the most courageous with freestyle and freeride areas.

Garmisch Partenkirchen is in the germany’s highest mountain: the Zugspitze (2964m)

This skiable domain is on Germany’s highest mountain, the Zugspitze (2964m) which offers an incredible experience to skiers.

The exceptional views and the pistes justify the important tourism infrastructure. Starting from Eibsee, a cog railway leads you to Zugspitzplatt’s Ski resort at 2650m of altitude. To reach the top, you will have to use the cable car.

in an attempt to relieve the number of skiers and snowboarders who travel to the resorts by car.

In addition, the company leases the roofs of its gondolas to the regional power company to produce solar energy.

How does it feel to be high up in the clouds, over 2,600 metres above the sea level, overlooking four countries? You can feel it in the igloo village Zugspitze, in the heart of one of Germany’s favourite ski resorts. Relish this majestic setting on the Zugspitze glacier and indulge in a truly special night in Germany’s highest igloos.

The Kandahar downhill at the Garmisch / Partenkirchen / Zugspitze ski resort

The famous slope makes for burning thigh muscles among skiers for a reason.

The Kandahar is among the most challenging downhill slopes in the FIS Alpine Ski World Cup, a competition that takes place in Garmisch-Partenkirchen annually.

With two variants and a total of 1,800 metres in altitude along a length of 7 km, the Kandahar provides an memorable experience even for good amateur skiers.

Have a blast visiting one of Germany’s largest Glaciers during summer!

You can experience the elemental forces at first hand on the Zugspitze glacier.

Over millennia, snow and ice have left their mark on the mountain terrain and offer a delightful playground for outdoor adventures and recreation.

Particularly in summer, young and old mountain lovers alike enjoy a refreshing time out high over the valley floor.

In the wild and picturesque alpine landscape at the foot of the Alpspitze, there are hiking trails of all levels of difficulty.

You will find many pleasant trails here with ample time to take a rest and savour the natural beauty, suitable for those on a day trip, senior citizens who are keen hikers and families travelling with children.

The summit experience trail around the Osterfelderkopf, the family-friendly enjoyable adventure trail from the Alpspitzbahn mountain station all the way to the Kreuzeckbahn mountain station, the geological nature path or the climb to the impressive Höllentalklamm canyon are all particularly sought-after.

There’s more to a memorable sojourn in the Igloo Village Zugspitze than just spending the night in an igloo. Included in your experience is a traditional Swiss cheese fondue, a walk in the snow under a starry sky, time to soak in the whirlpool and sauna, and breakfast in the Sonnalpin alpine restaurant.

Available accommodation ranges from multi-bedded rooms for families, friends and groups to romantic igloos, with en-suite toilet on request. Each igloo room is fitted with sleeping mats and outdoor sleeping bags for cold temperatures down to -40°C.

Every winter, the Zugspitze Igloo Village is newly built. With great attention to detail, artists create new enchanting worlds of ice and snow in the rooms of the igloo village annually.

Nestled on a rural trail, this modest, mid-mountain seasonal lodge dating from 1855 is 4 km from the iconic Garmisch / Partenkirchen / Zugspitze mountain and 18 km from national road 23.

The low-key, mixed-sex guest dormitories have communal bathrooms for both men and women.

Set in a rustic, country-style dining room, meals are accompanied by a terrace with scenic views of the mountains.

Dating back to 1884, this refined lakefront hotel is a 4-minute walk from the Eibsee cable car that takes guests to the Garmisch / Partenkirchen / Zugspitze ski resort.

Featuring lake or mountain views, the classic rooms are uniquely decorated and include a flat-screen cable TV, complimentary Wi-Fi as well as a minibar. The majority have a separate balcony or terrace, whereas some of the suites also boast a separate living area with couches.

A free breakfast is available. A traditional Bavarian style restaurant is featured, as well as a bar with a chimney. Among the extra amenities guests will appreciate are an indoor pool, a Finnish steam sauna and a Turkish bath, in addition to tennis courts, a gym and a private beach by the lake.

✅ Opportunity to spend a night in an igloo that is designed differently every year.

✅ Skiing on the highest mountain in Germany.

✅ Possibility to walk over the Zugspitze glacier.

✅ Located an hour away from Munich by car.