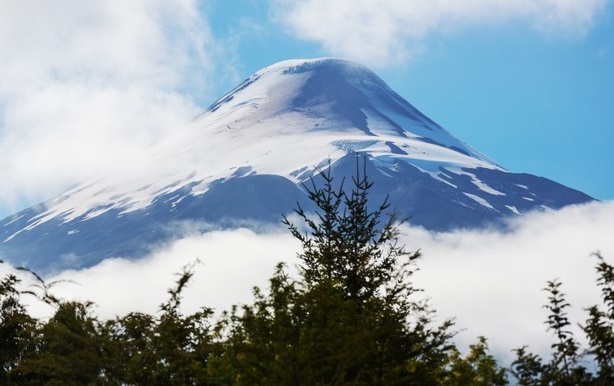 When experts are asked what skiing on the Osorno Volcano implies, the answers are always the same, ranging straightaway from the technical features to passion. There is nothing more delightful than having the chance to ski on a volcano. Not only because of the snow quality its hillsides treasure year after year, but also because of the mysticism every volcano has.

The Osorno Volcano lies a few kilometers away from the cities that surround the spectacular Lake Llanquihue, such as Puerto Varas, Puerto Octay, Puyehue and a little more distant Osorno.

That is the reason why it has become one of the main attractions in the area when the snowfalls begin. Volcanic activity started in the area 200 thousand years ago. History reflects a complicated process of growth and interaction with the vast glaciers which nestled in the region during the glaciation period, which gradually changed the shape of the volcano.

At present, both the top of the volcano and its main crater are fully covered by a permanent glacier. Volcán Osorno Most visitors, who come along both during the winter and summer season because chairlifts operate year round, stay at the City of Puerto Varas. Only 60 excellently paved kilometers separate this beautiful city from the volcano within the context of a wonderful scene combining mountains, woods and lake.

The chairlift, the year-round hiking tours and the Tyrolean crossing -said to be the longest in Chile- are part of the added value at this ski resort. Amusement is guaranteed for children and grown-ups alike and so is safety at each of the services provided.