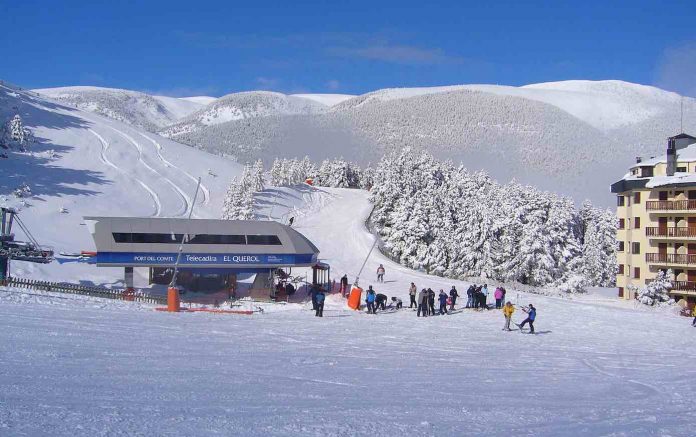 Port del Comte is a ski resort located in Port del Comte massif, in the Catalan Pre-Pyrenees within the Province of Lleida. Framed in the Solsonés region, within the villages of La Coma and La Pedra. It is divided into three sectors: El Querol is the main sector with a maximum height of 2000m, El Sucre, La Bofia and La Estivella, with a summit in Clot Rodó (3000m).

Its inauguration was on the Magic Kings Day (January 6th) in 1974, although they began building it in 1973. The most important peculiarity of this station is the fact that most of its trails run through a lush pine forest, which gives the descent a special charm. There are also multitude of links and paths between tracks, which means that every descent would be different from the previous.

Climatologically this resort benefits especially from the east storms, and thanks to the forests that surround the slopes and the artificial snow making machines, the conservation of the snow is quite good throughout the period the resort is open.

In recent years, the station has made significant improvements and investments in artificial snow machines. Nowadays has a total of 256 canyons, capable of providing the necessary coverage to a total of 20 km of slopes.

As way of transport and also thanks to the investments made trhough recent years, the quality of the lifts has been improved. Currently has a total of 16 facilities with a maximum transport capacity of 16 060 people / hour; specifically, they are five are chair lifts, nine ski lifts and two magic carpets.

The Port del Comte resort doesn’t have many unevenness generally speaking, but this handicap is in contrast to the variety of slopes it offers. As said earlier, it is made up of three different sectors, each with a very remarked personality, and at the same time connected to each other.

It has about 50 skiable kilometers, divided into 36 trails, seven are low difficulty (green), 11 are medium difficulty (blue), 13 high difficulty (red) and 5 reserved for experts (black) . The maximum skiable slope can be made from El Querol (2000 m) to the base of the slopes of the Hostal (1700 m), which gives a difference of 380 m (TC El Querol). This descent can be done with minimal difficulty, as is considered a blue track, with some red or black points (partially) to improve the delight the most adventurous skiers.

Up to 256 snow cannons, being the 10th station in the Pyrenees in production units.

Given its location on the southern slopes of the Pyrenees, specifically the Pre-Pyrenees, the key meteorological factor in this resort are the “levantadas” (winds from the east). But also, Atlantic origin disturbances originated in the Gulf of Cádiz, and then through the Mediterranean. Winds from South-north orientation at the height of the Tarragona coast.

The Hotel area, with 4 ski lifts and two magic carpets, as well as a detachable chair (4 ppl.). It is the starting point to access the entire resort. With blue / green trails (La Serp, Rasa Coma), red (La Dreta), or black (La Querol, Tub Coma) … a link in the middle of the descent leads us to the next area: El Sucre – La Bòfia.

With 2 fixed chair lifts (4 people) and 2 ski lifts, it is the most area suitable for intermediate skiers, with many red trails. Available since the 2011-12 season, the “free-ski area” is an entire forest that was groomed to comfortably ski under trees with an acceptable vertical drop. Although, in this specific case, it is reserved only for expert skiers.

From the La Bòfia chairlift you can access by an almost endless slope to La Estivella area. It is a skiable area facing north where the amount and quality of the snow is always superior. There are tracks that are never trodden, such as l’Estadi or l’Arderic; apart from great off-pistes. Also the little ones and less advanced skiers would enjoy this area. We find here La Font trail, with great views and even more adapted slopes. In Estivella the ski lifts are obsolete, with two simple lifters. The access and return from the lifts become a bit unpleasant, because the skier needs to walk.

In the hotel area there is a Freeride area for beginners. Since the 2012/2013 season, some lighting has been installed to access this area at night.

The Port del Comte Ski Club was created more than 40 years ago in Sant Llorenç de Morunys (Solsonès) taking advantage of the opening of the ski resort which shares the same name. With the main purpose of enjoying nature skiing, playing sports, and sharing it with enthusiasm and respect.

It is a non-profit sports entity with headquarters and office, open to everyone, in Sant Llorenç de Morunys. The Club is made up of more than 300 members, many of them children, which makes it a very familiar club where we all have a place.

At the same time they enjoy skiing, they promote ski courses to all those who want to start in this sport. And for those who have a certain level, they have a competition team made up of young people. Motivated and enthusiastic about this sport, they compete in championships of the Catalan Winter Sports Federation.

Currently and thanks to the enthusiasm, dedication and good will of the entire team and volunteers, they organize the Vall de Lord Race at the Puerto del Conde Resort; The last season it hosted nearly 200 runners.

For those who do not want to put on skis but still want to have a good time, there is available an excellent area of sleds and tubbies with a magic carpet. You do not have to walk up the slope, or at least you dont need to. You can also rent snowshoes for a walk.

The après-ski, due to the fact that it does not have a village at the foot of the slopes, is very limited and does not open until very late. One aspect to improve. There are three bars for eating or have a few beers in an incredible location. In Sant Llorenç de Morunys and especially in Solsona, you will find more party atmosphere (specially on weekends) with restaurants, bars, pubs and clubs. The atmosphere is pleasant but calm, as there is no excessive party.