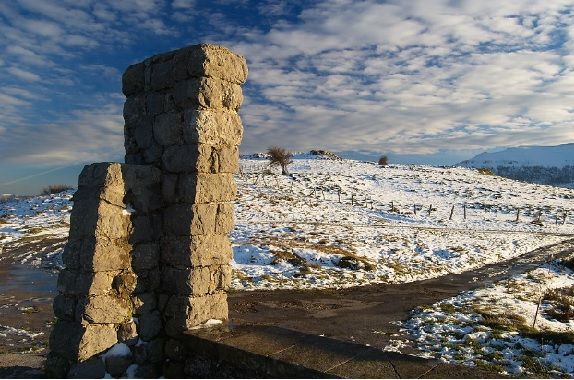 Lunada is the smallest ski resort in Spain. It is located in the Cantabrian mountain range, in the province of Burgos, within the autonomous community of Castilla y León, Spain. It has two ski lifts, a ski and snowboard school and eager to offer visitors a unique experience in the snow during winter and in the mountains during the summer.

Location and history of Lunada

Lunada lived a golden age in the mid-eighties. The proximity to a great economic hub like Bilbao (in fact its beginnings are due to the big amount of benefits coming from Bilbao), allowed weekend after weekend the resort to be open with an overwhelming influx of people, even too much. The resort had two parkings at the time; one was occupied by buses, which were full, while cars occupied the other and the sides of the road. In fact, many times the parked cars reached the deviation from the resort.

It was other times, times of glory. Then the station fell into oblivion. The improvement of general road communications, and years of little or no snow (low levels), were the cause of oblivion and almost, the complete disappearance of Lunada’s.

During the 2013-2014 season the resort remained closed due to the fact that the resort entered into competition after the refusal of the company that managed the resort to pay the high fee that was necessary to pay to continue with its exploitation. However, since the following season and with the change in direction, the resort has opened whenever the conditions have been ideal.

Lunada is one of the few places to practice winter sports in the province of Burgos and the only one in the Las Merindades region. The wide offer of services at the Lunada ski resort includes 2 kilometers of slopes that the station offers during the winter. Also acts as a starting point for different mountain routes, using crossing material and rackets, ski equipment rental service and snowboarding, mountaineering equipment …

It is an unbeatable place to do mountaineering activities and be guided by its mountain guide service. It is a real pleasure to discover its flora and fauna, as well as its incredible landscapes. Is also possible to make ascents and hiking trails through the natural environment this small ski resort occupies, ideal for families and beginners.

What does the resort offer?

Lunada has four fully operational teleskis and a telecord for beginners. Lunada’s teleskis are authentic museum relics. They undoubtedly belong to another era. In fact it is suspected that they really are some of the original lifts from the neighboring Alto Campoó station. Two of them are electric while the other two still run on diesel.

They have a curious system of exit of the hanger, and they are not automatic. They need an operator (or even the skier himself) to pull a  little chain to allow the hanger to start moving and dragging the skier.

But this is not the only curious detail of Lunada’s ski lifts. The most curious thing is, undoubtedly, that each ski lift is painted a color, and thus each of them is known. Although they have a name, the truth is that this is not usually used.

Lunada is a ski resort that suffered very long periods of drought, with little rainfall but has also experienced episodes of huge snowfall that have kept the ski resort in a delicate situation, having to move large amounts of snow to continue with the activity and Put the ski lifts into work. By excess or by default, the truth is that Lunada is a place of great natural beauty ideal for winter sports. Of course, you have to visit when the conditions are appropriate, given the great irregularity that presents when speaking about snow accumulation.

Lunada holds the record of being the place where you can practice skiing at the lowest levels of the Iberian Peninsula with mechanical lifts. In fact the minimum level is located at 1.280m and the maximum at 1.440m.

They are really low levels, it is an undeniable fact, but the hydrological characteristics of the place make it one of the places with more rainfall. This fact gives us as a direct result that either heavy snow falls or, on the contrary, large rainfalls. And as an indirect effect, it makes the snow quality especially variable.

Lunada, an ideal ski resort to learn to ski

The ski resort has lower levels throughout the Iberian Peninsula and its viability has always been at stake. After several periods of decline, an external company has tried to take the direction of this beautiful mountain that offers a wide range of activities throughout the year. However, the high fees that must be paid to the City Council, have caused differences between both parties. Ending up having an impact on the proper management of a skiable domain that increasingly accumulates less snow every year.

Alpine skiing may not be the only mean of subsistence, and should be positioned as a mountain destination all year; proposing even more outdoor activities that attract public during the winter, but also during the summer.

News and status of the resort

The Lunada ski resort, in Espinosa de los Monteros, Burgos, has broken and this winter, since the 2019/2020 season it has no longer opened its doors to the public. It is a new case of a small station, publicly owned and granted in concession to a private company, which fails to get afloat.

After trying this past December to recover the facilities, the concessionaire company (Snow Mountain) had not paid the annual fee, nor the electricity. The ball (rather, the ski resort), will be again on the roof of the City Hall.