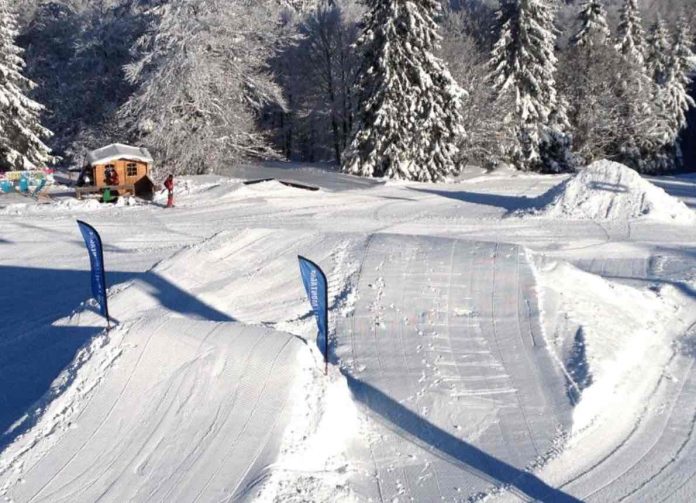 La Schlucht is a small familiar ski resort nestled among the Vosges and Alsace at 1139 meters above sea level. It is placed in the Schlucht pass, one of the main passes in the Vosges mountains, located between the villages of Valtin (Vosges) and Stosswihr (Upper Rhine), allowing the connection between these two departments.

It is one of the crossing points of the ” Route des Crêtes ” created by the French army during the First World War. A group of French engineers mapped out this strategic route in 1914, to establish a connection behind the outpost in Alsace. It was intended to connect the Col des Bagenelles to the Markstein. Demilitarized, it was opened to the public after 1920. The main peak of the Vosges is located about fifteen kilometers to the north and forty kilometers to the south.

Winter sports began soon after. But before it was opened to the public, a military winter sports championship was organized, which included skiing, sledding, bobsleighing, and joering.

In February 1937 opened the first ski lift in the Vosges and the first French ski school created in the Vosges in 1949. The school also teaches cross-country skiing. Hotel facilities include various hotels, restaurants and chalets.

It was one of the pioneering resorts to install artificial snow cannons, which have been working non-stop since 1987. The administrative company, Labellemontagne, also present in the French Alps, is currently at the forefront of the largest ski area in eastern France.

The La Schlucht ski resort has two 700 m long blue trails in a special alpine area for beginners. La Schlucht has a Snowpark for those looking for adrenaline, with modules, rails and an obstacle course (Boarder Cross).

The too steep profile of the Alsatian resort makes the skier fix his gaze on the Hohneck mountain. Its located near Montabey, between the Haut Fourneau in the north and the Spitzenfels at the beginning of the Hohneck massif in the south.

The resort hold a large part of a ski area that today shares with La Bresse Hohneck.

Schlucht is one of the pioneering resorts in the Vosges and one of the most important in eastern France. It is a ski resort that hides many secrets.

Strong emotions guaranteed in the snowzone, or family skiing at your own pace on the blue slopes; In La Schlucht we can practice a wide variety of winter sports.

What can we expect in La Schlucht

One of the main reforms that this resrot has undergone is the creation of a freestyle area. Le Park, an area where creativity and new trends go hand in hand, offers skiers and snowboarders a meeting point; perfect to evolve, progress and improve by sharing feelings and advice.

We must also visit the Cool Zone with barbecues, sound systems and sun loungers to rest and share moments with our family and friends.

The snowpark extends over 3 hectares including one hectare of wooden modules, as well as; two big airbags, 6 meter Canon box, rails, and modules of all levels.

And, of course, the rest areas where you can recover between descents. Events are held throughout the season, fostering the unique atmosphere set by contests, Jam sessions, DC Day and freeride. The boardercross extends over a very considerable lenght of 700 meters. Home to snowmobiles and bicycles (downhill bikes), when the snow cover is thick enough.

A destination where trends are created

The latest additions to the resort have included the big airbags and the wooden module area. Although each year we can expect new facilities so our visit is different from the previous year.

The alpine domain is reduced to two 700 meter long blue trails, particularly appreciated by beginners; But those who visit La Schlucht have another kind of activities in mind. During the last years, the resort efforts and investments have focused on the freestyle area.

Le Park, as the freestyle area is known, is an area where creativity and new trends go hand in hand, offering skiers and snowboarders a meeting point; perfect to evolve, progress and improve by sharing feelings and advice. The possibilities for freestyle are countless.

Including the 800 meter boardercross where we can find all kinds of skiers. Throughout the ski season we will find several instructors whose main mission is to indicate where you should go to practice your favorite activity.

The Schlucht has about fifteen kilometers of trails aimed to the practice of Nordic skiing, as well as many hiking trails with snowshoes.

Come to La Schlucht during summer

The La Schlucht resort offers a summer sled for all ages with more than 100 meters of unevenness and 850 meters length. A destination to enjoy adrenalin throughout the year.

The Col de la Schlucht is the starting point for the via ferrata of the Hautes-Vosges, Crêtes, and the path of the Roches, known as Alsace Strohmeyerpfad. This route, the most famous in the Upper Vosges, was opened in 1910 by the president of the Vosges Club of the Munster Valley. Pfàd means “walking path” in Alsatian.

From the Schlucht pass (near the descent to the highway to Munster), this picturesque hiking trail runs along the cliffs on the Alsatian side, crossing the moraines; Thanks to the existing facilities, the tunnel that we find today could be built. If we are skilled at climbing, take walkways to cross ditches and climb walls.

Speaking of landscapes, we can appreciate a panoramic view of Alsace and, depending on the weather, the Bernese Alps. The path leads, depending on the route (either through Frankental or Hohneck) to an ascent almost perpendicular to the peaks of the Vosges, or to Trois-Fours for a long ascent in ridges. From Hohneck or Trois-Fours, one can easily return to the Col de la Schlucht along the ridge and thus complete a circuit. In winter, the Roches trail is very dangerous and not actually profitable.