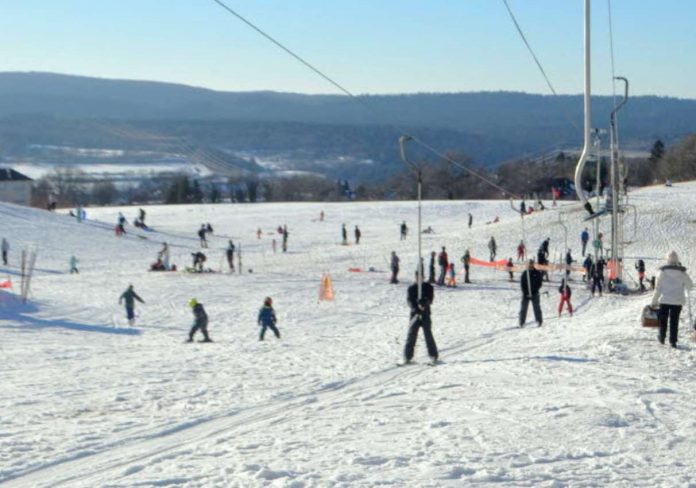 The Hauteville-Lompnes ski resort is located on the Plateau d’Hauteville, in the French department of Ain, within the Auvergne-Rhône-Alpes region. It allows alpine skiing and snowboarding (in the Terre Ronde sector), as well as cross-country skiing (Nordic sector of La Praille). This family mountain resort of medium altitude, welcomes all kinds of public thanks to its trails of very varied levels and accessible to all.

History of the Hauteville ski resort

Since 1924 it has been recognized as a ski resort, where the quality of its air stands out. The Plateau d’Hauteville commune, labeled “Station Verte de Vacances” and “Village de Neige”, enjoys a medium mountain climate and a particular geographical location; It allows the conservation of snow without actually freezing it.

Clean and dry air is a natural claim for skiers and people who need a specific air quality. The limestone floor absorbs all moisture, thus preventing the appearance of fog. The lush forests function like a natural lung, offering clean, oxygen-rich air that has nothing to do with city air. This plateau where the resort is nestled is free from all atmospheric pollution. During spring, pollination is shorter, later and less severe than in surrounding regions.

Since 1998 scientific campaigns have addressed the quality of the air that is breathed on the plateau with chemical and biological analyzes.

Location of the Hauteville ski resort

The village is settled 850 meters above sea level. It is crowned by Mont de la Rochette to the east, the highest point at 1240 meters. The Col de la Rochette, 5 kilometers away, allows us to discover the surroundings of the resort with a peak at 1112 meters. It is the only access to the Praille ski trails: 25 kilometers of cross-country ski trails divided into four green trails, one blue, one red and one black, in addition to the snowshoe routes.

The commune has over two thousand buildings. Of which the vast majority are residential, leaving a small percentage for hotel accommodation.

Hauteville resort’s has several sports facilities; football and rugby stadium, a basketball and volleyball court, a judo room, an indoor pool and a gym.

The alpine ski area runs between 900 and 1200 meters and is made up of about fifteen kilometers of slopes with 6 ski lifts (magic carpets and ski lifts).

At the resort, you will find a ski school and a snow garden, equipment rental (skis, boards, sleds, snowshoes, snowblades, helmets …), as well as a bar at the foot of the slopes.

The Terre Ronde ski area allows for downhill skiing, snowboarding, ski-surfing and snowblading. The ski area stretches between 900 and 1.200 m above sea level.

In the alpine domain, both professional (the competition trail stands out) and beginner skiers meet, taking advantage of the familiar and close character of the resort. Sled run, snowpark with cable rope, Nordic Cross, wellness area (Swedish baths and sauna, with on-demand reservation at the tourist office).

This sector also has equipment rental shops and depart points to the Nordic ski routes with snowshoes.

You don’t need many excuses to visit Hauteville

It has four ski lifts in the Terre Ronde sector, which serve a green slope, two blue slopes, four red slopes and a black slope. The resort carries out a large part of its activities during the winter months, although during the summer the resort keeps activities running.

If it is the first time that we have stepped on the snow, or we want our children to know how to spend themselves, the Bugey ski school offers individual and group classes in Nordic and Alpine skiing. This family mountain resort of medium altitude, welcomes all kinds of public thanks to its trails of very varied levels and accessible to all.

In the “Terre Ronde” sector you will have access to 13 trails, a snow park and a recreational park. The “La Praille” sector is aimed to Nordic activities (cross-country skiing, snowshoeing, mushing, sledding) with 53 km of cross-country trails and 7 snowshoe routes.

The city is nestled on the Bugey plateau (one of the 4 regions of Ain together with Dombes, Bresse and Gex). Bugey is a mountainous area but it does not stand out for its altitude, which is part of the Jura massif.

With more than 50 km2 of surface, Hauteville-Lompnes was the largest town in the Ai ndepartment, until the creation of Haut-Valromey in January 2016.

In brief words, this small resort will allow you to spend a pleasant day with unbeatable value for money.

What can we visit near the resort

Sylans Lake is placed in a natural cluster, that is, a valley carved by a river perpendicular to the mountain. Placed at the bottom of the valley, in the Nantua cluster, Lake Sylans is an “accidental” lake. It was presumably formed during the Dark Ages, after the collapse of the northern cliff of the Nantua cluse (glacial moraines), which partially filled the valley by obstructing the flow of the sources of the Doye.

It is feeded by the Charix current. The lake’s water seeps underground through the walls and feeds the Doye’s spring. As we head to the upper part, we will see the Comet stream to the northwest.

On the east side, we find some remaining walls and facilities of the ice factory, wich would carry until 1917 the ice naturally formed in the lake (ice with more than 40 centimetres of thickness).

The harsh mountain climate and the scarce insolation in winter have led to the creation of one of the largest natural ice exploitations. Probably the first clients of the ice factory were those of the Café du Paradis in Nantua, who took advantage of the ice to refresh their clients’ drinks.

The extraction of ice was carried out naturally until the transfer of the business to the Glacières de Paris in 1885. The factory lived its golden age thanks to rail transport that exported ice to Lyon, Paris, Marseille and even Algiers. In 1924, the land and buildings were returned to the municipalities when the lease expired.