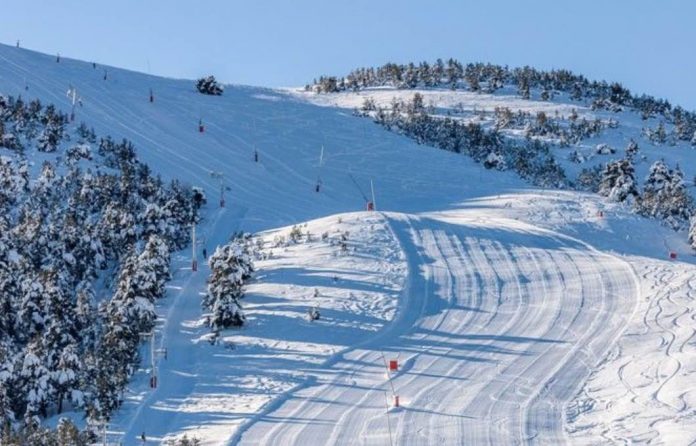 Gréolières les Neiges is a ski resort in the Alpes-Maritime. Situated about forty kilometers from Cannes, it is part of the commune of Gréolières.

A family ski resort, it was created in 1962 with initially 6 lifts: Le Collet, Le Grand Pré, Le 1664, Le Jerusalem, Le Cheiron and Les Crêtes. Currently only Le Cheiron, Les Crêtes and the fixed chairlift remain. The resort is the result of work by Belgian citizens. Originally, the administration for the resort was private, although later it was made public. The current public ownership is comprised of three parts: 95% belongs to the departmental council of the Maritime Alps, 4% to the town of Gréolières and 1% to the Communauté d’Agglomeération du Pays de Grasse. The current director of the Gréolières-Les-Neiges resort is Jean-Paul Rouquier.

The layout of the slopes in Gréolières

There are 1000 hectares of forest and alpine pastures that cover the 20 trails (30 km) of skiable area, will delight skiers of all levels. Astonishing views of the Alps play an important role when visitors choose to come to Gréolières, not to mention the enviable weather with hours of sunshine. What’s more, from the resort you can admire the Côte d’Azur, the immensity of the Mediterranean Sea, the peaks of the Mercantour massif and Corsica, if the sky is clear.

Its modeset size invites nature lovers to relax, provides peace and harmony and manages to avoid the large crowds of other more sizable ski areas. Its facilities (1 hotel, 3 restaurants, 2 cafeterias, 1 grocery store, and 3 equipment rental stores) may seem scant, but they more than satisfy the tourists who come to get some fresh air from the mountains and the sea, only 40 km away (Cannes).

Gréolières has more to offer than just Alpine and Nordic Skiing

There are many ways in which the mountains can be enjoyed in wintertime in Gréolières-Les-Neiges: Take a dog sled ride, go on toboggan runs, as well as visit the Monts d’Azur bison nature reserve. You can also have fun with your family at the roller skating rink.

The resort that resides on the northern slopes of the Cheiron massif, offers 20 trails for all levels (2 black, 11 red, 4 blue and 3 green) that meander through a beautiful pine forest, valleys, cliffs and ridges from where you can see the Mediterranean Sea and the French Riviera.

The 30 km of trails stretching between 1400 and 1800 meters, is served by 11 lifts (1 chairlift, 8 lifts, 1 cable rope and 1 conveyor belt in the ESF snow garden which is reserved for young children). Seventy-six artificial snow cannons cover 4 km of slopes, enough to reinforce the snow cover if it gets scarce during the winter season.

A resort for learning and improving

The ESF welcomes skiers and snowboarders who want to advance and better their skills. It also organizes workshops to help people to discover snow and provide kids with their first contact in a special environment, designed just for them, the snow garden; a purposeful and safe environment equipped with a conveyor belt.

Both beginners and experts can fully enjoy winter sports thanks to the diverse slopes available of the Gréolières-Les-Neiges ski resort.

– For beginners, the resort has 3 green trails: Le Bambi (perfect for beginners), Les 2 Etoiles (great to have fun) and finally Les Ecureuils to progress.

– Intermediate skiers can enjoy the 4 blue slopes, including La Promenade (the most engaging) that allows one to take the necessary steps to arrive at the 11 red slopes (Le Cairn, a wide trail to turn, similar to a boulevard in the snow).

– Sports and expert skiers alike have wide curves where they can veer to their heart’s content. The resort’s slopes and obstacles favor their style providing walls, valleys, mountain pastures, and forest areas. The red Le Chamois trail and the black Le Vallon stand out from the rest for their progressive design: a real delight.

The Notre-Dame-de-Verdelaye Church dates from 1047. It was during this period that the Saint-Victor Abbey in Marseille, gave it to three brothers who were responsible for managing it, Étienne, Guillaume and Inguilran. The church, located below the town, has been in ruins since the 16th century. This was noted by Bishop Antoine Godeau in his visit reports in from 1664.

It was a three-storey building of which only two remain today. The apse and part of the vault have collapsed. It used to be an important pilgrimage site. The Virgin and Child from this church are preserved in the Saint-Pierre church.

The city of Gréolières offers an ideal departure point for nature walks. Walking or cycling routes in summer allow you to discover the flora and fauna of the Southern Alps.

Families, tourists, hikers and the even the very residents of the region take advantage of its routes for the abundant fresh air and close contact to nature. The routes at the Gréolières les Neiges extend throughout the ski resort and the Cheiron massif.

There are many routes for hikers, including one notable one that takes you above the town of Gréolières. The trail allows you to reach Gréolières les Neiges, crossing over the Cheiron peaks. From here you can see in the coast in the background, from Toulon to the Italian border and, on clearer days even, Corsica.

News
Raphaël Ibáñez is invited to train Val d’Allos’ staff
For one more season, rugby is invited to the mountain to share its most valuable sports and human va...