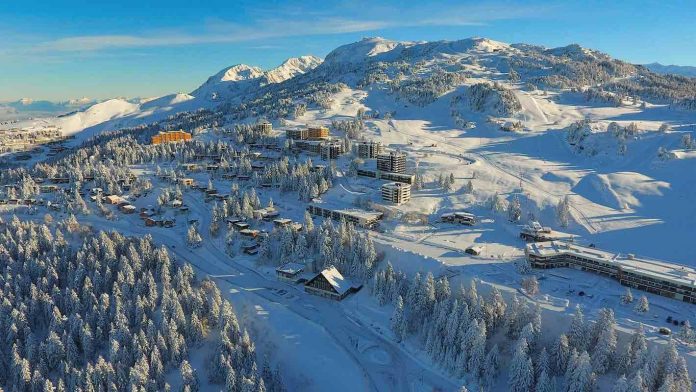 Chamrousse ski resort, in the French department of Isère, is located at the western end of the Belledonne massif. Just 30km from Grenoble area, holds three diferent levels: 1650 (Recoin), 1700 (Villages du Bachat) and 1750 (Roche Béranger – Domaine de l’Arselle). To ease travel, it has a free transport service. This connects the different areas of the resort and some trails.

History of the Chamrousse ski resort

Located in the heart of the forest, the Chamrousse ski resort gained international fame during the 1968 Winter Olympics in Grenoble. It attracts families and athletes (among others, with a bunch of freestylers as well) thanks to its dedicated infrastructure.

The three villages of Le Recoin, Roche-Béranger and Bachat-Bouloud, wich are also known by their respective altitudes (Chamrousse 1650, 1750 and 1700), form a ski resort with Olympic roots.

Built in the 60s for the Winter Olympics. Chamrousse is nowadays considered the private ski area for Grenoble skiers. The city is 25 kilometers away, and is a popular winter sports resort for families.

Distribution of the slopes in Chamrousse

Under the name “Nordic Park”, it has a sledding and freestyle area (Snowpark, Kid and Family Parks): the “Sunset Park”, where many will find themselves more than comfortable skiing.

Dominating Grenoble from its 1700m, the Chamrousse ski resort in the Northern Alps is located south of the Belledonne massif. Chamrousse is easily accessible, on two roads from Grenoble.

The Belledonne massif has retained all its essence and has given the resort its unique location. To welcome you and guarantee you a stay full of pleasures of nature, Chamrousse develops its season on two levels: Chamrousse 1650 (Recoin) and Chamrousse 1750-1700 (Roche Béranger-Dominio de la Arselle); both converge on the ski slopes.

The orientation to the west of the resort guarantees an optimal snow cover. To which should be added the hours of sunshine that are enjoyed during the day.  A peculiarity of Chamrousse are its “red fields” (” Les Champs Rouges ”). They are the sunsets that color the clouds and snow fields of this French valley with an incomparable red.

Its distribution in the ski area allows a different network of slopes to be accessed from the resort. The original village of 1650 (Recoin) is famous above all for its Olympic slopes, such as the famous “Casserouche” trail. They also stand out for their quite demanding descents that start from the Croix de Chamrousse at 2.250 meters above sea level. Chamrousse 1750 (Roche-Béranger) was built at the same time, and Chamrousse 1700 (Bachat-Bouloud), the chalet village,  it was built under the Croix de Chamrousse.

Both offer mostly easy and medium difficulty trails on vast slopes, largely deforested. Skiers in the Bachat-Bouloud area will benefit from direct access to the ski area thanks to the “L ‘Arselle” ski lift. While the Roche-Béranger area is famous for its beautiful powder snow areas, we found this one on the Arselle plateau.

Snowboarders of all ages and levels will have plenty of options in the Chamrousse ski area. We find in the area 2 different snowparks:

– the “Sunset-Park”, above Chamrousse 1750 and 1700. It is equipped with a boardercross trail and numerous modules.

– the “Kidpark”, located just below. It is specially designed for young gliding enthusiasts, and has its own boardercross trail; even a small race track.

Fun for kids (and not so kids)

An exceptional funpark, due to the many childcare possibilities in the resort, such as the kindergarten for children from 3 months, the ski kindergarten and the ski school. For skiers from 3 years old, Chamrousse displays its quality label “Les p’tits montagnards”. This distinction rewards ski resorts especially suitable for family stays.

But not only young skiers will find their happiness in the resort. Skiers and snowboarders looking for exceptional sensations on the slopes will also be pampered in this ski area. An unforgettable experience is, without a doubt, a night descent of the Gaboureaux track. During the descent, skiers can not only admire the sky, but also the sea of lights coming from the  nearby Grenoble.

Sledge lovers will be in luck in this particular ski resort. In the two toboggan areas of Chamrousse 1650 and 1700, we have the possibility of sledding with a brake. But only on Wednesdays and Fridays, from the highest point of the domain to the base of the resort.

To end the night calmly after a busy day in the snow, there are many trendy cafes, bars, restaurants and cozy nightclubs in Chamrousse. To recommend among others: “The Iceberg Café”, and the bar “The K’DOX”, which often organizes concerts and small parties; and to dance, the disco “Le Tempera”. Finally, for optimal relaxation, the resort also has a wellness center.