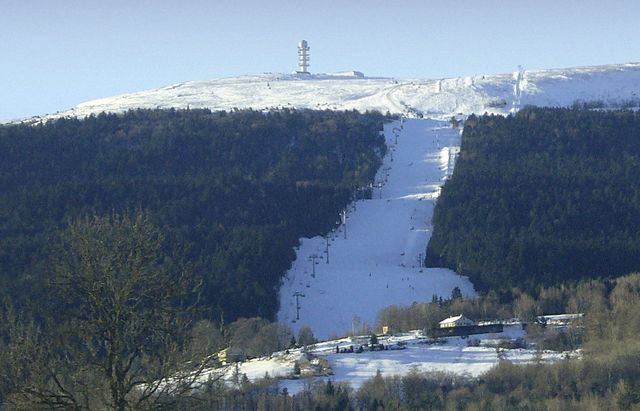 Chalmazel is a former French commune located in the Loire department, in the Rhône-Alpes region, known for its ski resort and castle. The ski resort is placed 1109 meters above sea level. The closest village, Les Bois, is 4 km away. It is connected to the city by a 6 kilometers departmental highway, and by line 112 of Transports Interurbains de la Loire (TIL).

History of the Chalmazel ski resort

The first Chalmazel ski lift was built in 1953. In the 1960,s, the resort was developed under the impulse of Éloi Marcoux, president of the local ski club, and Henri Essertel, secretary general of the municipality of Montbrison and the Régie de Chalmazel. The support of the General Council and its president, Antoine Pinay, led to the construction of the gondola in 1967.

It offers 12 km of alpine ski trails of all levels, 8 lifts including a detachable chairlift, snowshoe circuits and a snowpark.

The ski area stretches from 1109 to 1600 meters, directly on the slopes of Pierre-sur-Haute (1634 meters), the highest point in the Forez mountains. It alternates between forests and wild moors (Hautes Chaumes). It has 12 kilometers of alpine ski slopes with 1 removable chair lift and 7 ski lifts equipped with 90 snow cannons. This area has, when conditions allow, a small snowpark. The surroundings allow the practice of cross-country skiing (Nordic Haut Forez area in the Col de la Loge) and snowkite (Col du Béal). The resort also offers summer activities (tree climbing park, mountain biking, chair lift walking).

Distribution of the Chalmazel slopes

Chalmazel receives mainly visitors from the Forez plain and the Roanne and Saint-Etienne basins. These are located less than 80 kilometers away, but also, to a lesser extent, Clermont-Ferrand and Lyonnais.

At 1640 m above sea level, the Chalmazel ski resort opens its doors in winter, from December to the end of March. With family or friends, it is the ideal place to breathe fresh air. Skiing, sledding or snowshoeing, activities and fun for the whole family.

The only ski resort in the Loire (1100m-1640m) is in Haut Forez, one hour from Saint-Etienne and Roanne, half an hour from Montbrison and Feurs. Since 2003, the General Council, owner of the facilities, has been in charge of the exploitation of the area. Thanks to this, the resort underwent important changes (opening of an area mainly dedicated to beginners, various real estate projects during 2006, significant communication efforts …).

Tracks for all levels in Chalmazel

The Chalmazel ski slopes are exposed to the northwest (and to a lesser extent to the southwest), to the delight of skiers and snowboarders; whatever your level. Those who feel less familiar on skis, would start with the ski lifts and the 3 green slopes; designed to begin skiing in excellent conditions.

Once familiar with the basics of skiing, intermediate skiers can try the 4 blue slopes that make up the area. The sequence of trails in Gentianes, Replat, Bruyères and Sangliers form a very pleasant route from the top to the snow front. Advanced skiers will plot curves and turns on the 6 red slopes (including the Granges slope) that offer greater difficulty.

While the most experienced will not hesitate to slide down the 2 black slopes (La Combe des Alettes and Le Banban accessible via Couzan ski lift). Alternating between bumpy walls, steep slopes and terrain accidents along the slopes.

If necessary, in Chalmazel, natural snow can be supplemented by the production of artificial snow on approximately 6 kilometers of slopes; to guarantee ideal ski conditions throughout the winter season.

Apres-ski activities at the resort

The Chalmazel castle rises from the center of the town. Its construction began in 1231 under the mandate of the Marcilly family and continued by the Talaru family in 1372. This feudal castle is part of the Forez domain and was used to control the road to Auvergne through the Col du Béal. Medieval in appearance, it has preserved elements of the structure from 1231.

But with all the successive modifications and additions made by the Talaru throughout the centuries: lagoons, base of the walls, dungeon, walkway with battlements … It also has Renaissance elements: façade, interior patio, galleries, or the chapel. Nowadays it is completely restored, open for visitors, with rooms and reception rooms.