I Love Ski ®
Home News Job in the shadows: rescue team on the slopes! 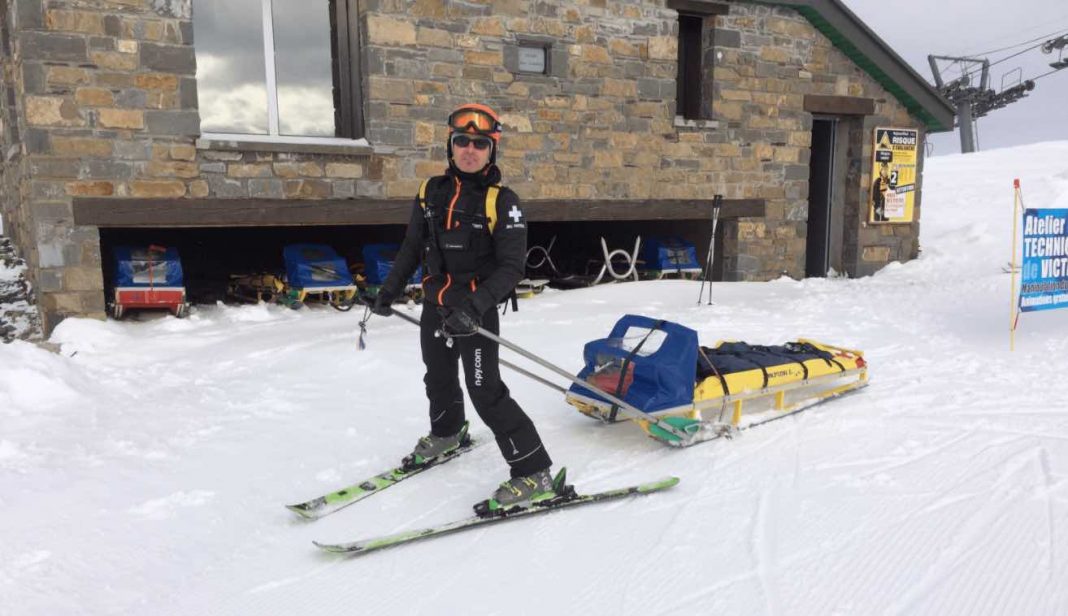 In order to know all the details of this exciting job, we have the great privilege to interview one of them, with 20 years of experience and very proud to have remained loyal to Peyragudes ski resort (on the French Pyrenees): Francis BASSAT.

He is a member of the rescue team on the slopes, on 2nd level but also a Snowmaker, a Snow and Weather Expert or a Avalanche dog handler. Francis Bassat is a permanent employee on this ski resort: during winter time he works on the slopes services and the rest of the year on the hydroelectric power plant of SHEM in Louron, as a cable car driver.

Could you explain the development of your typical journey ?

Francis BASSAT: In the morning, each rescuer travels around a slope in order to control the signaling ( sports mats, snowmakings, etc) and installe some extra signs (crossings, brake zone, low speed zone) and to declare the slope “opened”.

After that, we take turns to stay always on the guard post at the same time we patrol the material maintenance and the preven of accidents for our dear clients.

In the afternoon, it’s closing time! We travel all the slopes the same time as in the moring, but this time taking out the material that can disturbe the snow grooming machines and, of course, we use the last skiers to the foot of the slopes.

Which are the main duties of a rescuer team on a ski resort?

Francis BASSAT: The main responsabilites of a member of the recue team on the slopes are: opening, closing and keeping the security on the slopes. But also the rescue on the slopes and the prevention of dangerous behaviours.

On the case of the snowmakers, for exemple, it’s necessary to be prepared to make an Intervention Plan for Outbreaking an Avalacnhe, with the objective of causing an avalanche outbreaking for preventing maintenance using explosives.

Which are the qualities that must have a recuer team in order to do their job the best the can?

Francis BASSAT: The most important thing is to be polyvalent and in good physical shape. The recuer team has also to carry out this responsabilities: reception of skiers, secretary, computing and being able to ski in every weather condition.

Could you explain the procedures to become a recuer team?

Francis BASSAT: To become a recuer team of the slopes it’s necessary to have a Certification granted by the French Governement, organized in a regional level (this on the 1st level). The 2nd and 3rd are given by the National School of Ski and Climbing of Chamonix. To work as a Snowmaker, a Snow and Weather Expert or an Avalanche dog handler it’s indispensable a preparation and some complementary examinations.

Could you tell us a curious anecdote taking place on the slopes?

Francis BASSAT: Yes, of course. I remember a nice anecdote that happened on Peyragudes ski resort, involving the colaboration of all the team. Due to the strong winds, there was an early closure of the ski resort and the sector of Serre Doumenge had to be closed for the skiers. So a couple of rescuers went there to close with ropes different places of the ski domain.

Our partner and friend Maya was doing the same while driving his scooter. Unfortunately he didn’t see one of the ropes we had installed. Maya was hit and felt down to the ground, while his scooter keep driving until the Lake Boum, which was iced.

The risk the lake will break was very high and the scooter will go very deep! This is a lovely souvenir I keep from the work in team in Peyragudes, that make their effort to rescue the scooter from a friend without the direction knowing anything. Finally, the scooter did not sink…it was recovered!!

Some years after the accident of the scooter, a foggy night, it was then the turn of a snow groomer, that sink to the lake bottom , the famous lake “Boum”. This time, the team could not prevent the collapse of this several tons mosnter…but the important thing is that no one was hurt, the driver had time to come out unharmed.

Figures on the recuers team on the slopes:

The job of a recuer team of the slopes is a career passion, the love for the mountain is a mandatory precondition . We are esential for the good performance of a ski resort: we ensure the security of all the skiers, from the opening to the closing.

Jean-Marc Silva : ‘They should not remain exceptions, we must accelerate...