Skimo or ski touring is a mountain sport discipline linked to mountaineering. Skis are used to go up and down the slopes without the need for ski lifts and without the use of the slopes of a ski resort. Skimo is a combination of fabulous mountain experiences; a tailor-made suit for lovers of ski, snow and the natural environment. The sport allows you to move freely through the mountains and traverse snowy slopes, away from the crowds. One of the great things about this sport is that it allows you to go into untouched mountain areas during the winter, going back to the origins of skiing.

The practice of mountain ski is within the reach of anyone who starts out with adequate preparation, although for experienced alpine skiers it will be easier, given that they know the environment, the different types of snow and the technique of descent.

THE EFFORT IT TAKES TO GET TO THE TOP BY YOUR OWN MEANS, MAKES THE DESCENT UNIQUE AND MEMORABLE.

One point to note is that alpine skiing equipment is not suitable for mountain ski. In general, skimo equipment is lighter, as every gram is noticeable when climbing mountains. Skimo boots usually have fewer hooks and are lighter than alpine boots. 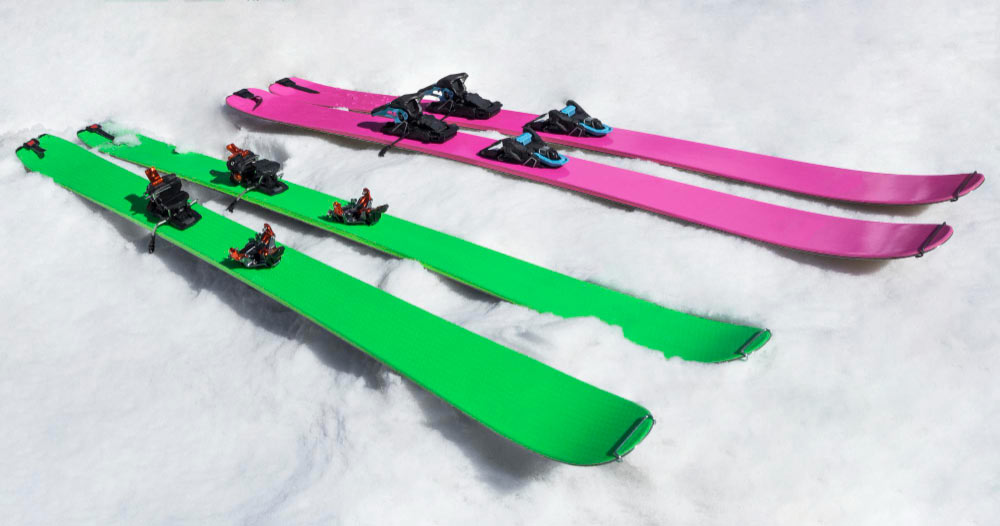 The skis are also lighter, have less carving and are normally wider (>90mm skid) to improve buoyancy. On the other hand, we must not forget that we are talking about a risky sport in the middle of a natural environment with no safety elements. The athlete must have extensive knowledge of the mountain and its risks, specific equipment and strong motivation, given the physical and mental demands of ascending and descending a snowy mountain by his or her own means.

Skimo for beginners: tips for enjoying the activity

The specificity of ski touring requires the athlete to be familiar with the equipment, as well as to know in advance the particularities of the mountain in winter, the different types of snow that can be found, the techniques of ascent and to be able to adapt the technique to each situation. This does not mean that it is a sport exclusively for mountain athletes, as Skimo is accessible to the general public if the conditions are good, the route is short, safe and we have a guide.

In short, the difficulty of the sport depends mainly on the weather conditions, the length of the route and the gradient. However, before taking their first steps in backcountry skiing, beginners will have no problem descending in off-piste areas, which are not part of a ski resort, before entering the “Great White”. However, try not to go inside the ski area: remember the many dangers of ski touring in a ski resort both during the day and at night.

Progressing on piste before ski touring

Beginners must be able to perform on piste, without difficulty, basic techniques to be able to glide on untreated snow: diagonal and diagonal drifts, wedge turns, fundamental and parallel turns. They must also know how to handle different types of snow, from hard and rough to virgin or spring snow. They should also pay special attention to their ski backpack and what they will carry in it during the activity.

To have a first contact with ski touring, it is advisable to go to a club or school and learn with a qualified instructor. It is always useful to know the technique, as well as the materials, safety, notions of meteorology and first aid. Finally, it is worth mentioning the importance of handling the ARVA and other safety elements. Here are some tips on avalanche safety and how to do your best to survive.

The top priority of ski MOUNTAINEERING is safety

It is very important to always be accompanied and, if not, to inform a relative or friend of the route you are going to take and the planned times of ascent and descent. It is also useful to carry a mobile phone with a fully charged battery.

During the activity, it is advisable to carry your phone in inner layers to prevent humidity and cold from affecting its autonomy. Here are some tips to avoid running out of battery while skiing. Below is a graphic with a summary of “the 20 commandments of ski touring” that we hope you will find useful.

The phases of ski touring

Neophytes wishing to take up this wonderful sport should know that Skimo or ski touring is divided into two phases: the ascent and the descent.

The ascent in skimo

When you climb a mountain in summer or simply a large building up the stairs, you will have noticed that fighting gravity is hard. Your heart rate increases rapidly and you can become tachypnoeic, with your breathing rate accelerating to over 20 breaths per minute. For this reason, it is important to start with short routes of low difficulty, taking the necessary breaks and setting an easy goal. 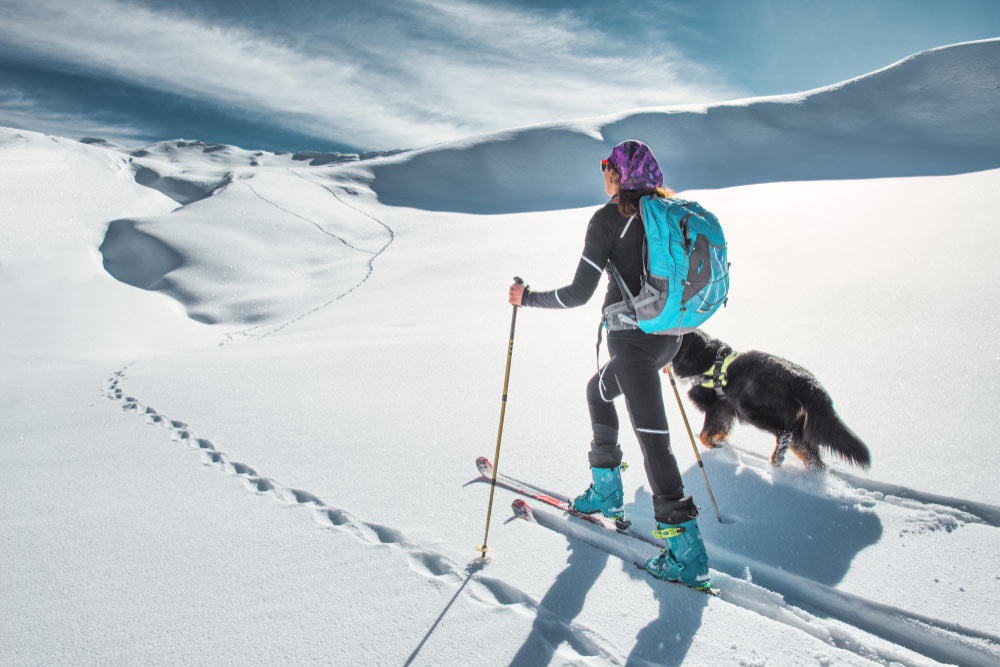 Before venturing on a Skimo route, you should have basic information about the topography to be accessed, the planned time for the activity, the degree of difficulty, the risk of avalanche and the weather forecast.

Other suggestions for being a “good skimer” would focus on the importance of hydration and nutrition based on healthy food. A tip? Look for the efficiency of the technical gesture in the arduous ascent phase: 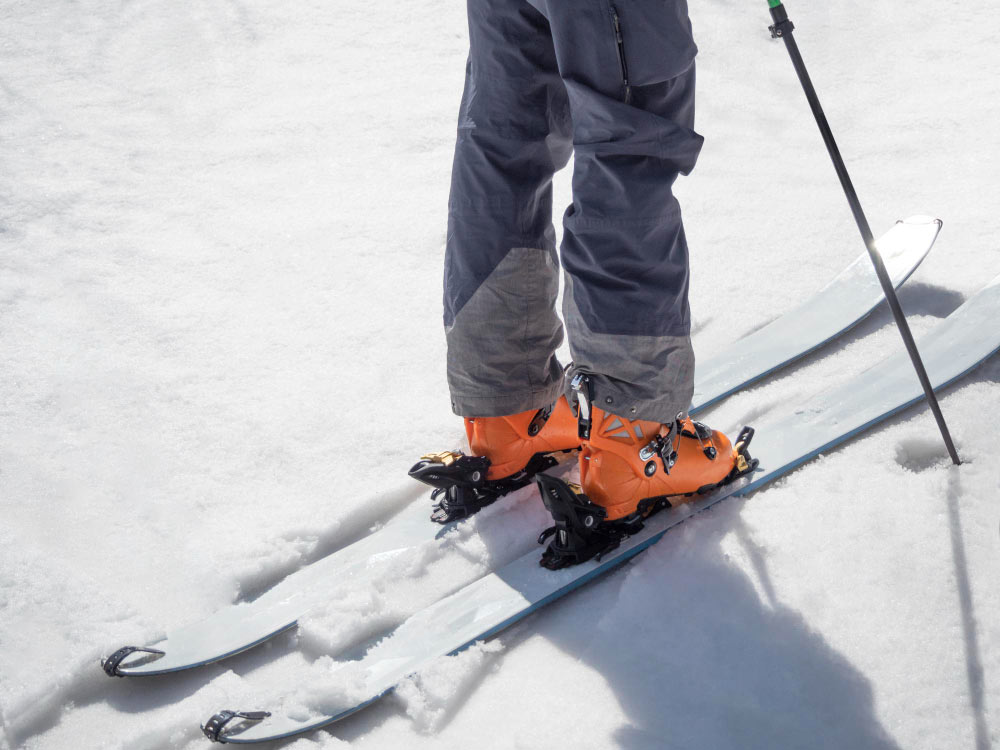 In untreated snow, the ascent is more demanding than in the mountains during the summer. The surface slides, is not homogeneous and also transforms and can be compressed when our weight is transferred. Touring skiers must regulate their body temperature and insulate themselves from humidity and wind, combining the most efficient way of using the layering system during the ascent, being advisable to do it lightly with tight-fitting, technical clothing, facilitating mobility and avoiding perspiration as far as possible. For the descent, take the clothes out of the rucksack and wrap up warm.

The must-haves: sealskins and touring bindings

To ascend you will need to use so-called sealskins. Don’t panic, nowadays they are made of synthetic materials. They allow sliding in one direction and prevent or limit sliding in the opposite direction.

On the one hand, the skins have a self-adhesive that facilitates their temporary attachment to the sole of the ski. On the other hand, they have stiff bristles or hairs directed towards the back of the ski to prevent the ski from slipping. Seal skins may be fitted with hooks or fastening systems at the top and bottom.

To install them, start with the spatula of the ski and finish at the bottom. It is important to check that it is well adhered to the sole, without roughness and without going beyond the line of the edges.

Mountain ski bindings have a different characteristic from alpine ski bindings: the heel lifts up and pivots on the toe. This is essential in the ascent phase to facilitate movement, to move the knee forward in a natural way and to flex the hip. There are different models, the more technical ones are lighter but also more complex to put on and take off.

In addition, the touring bindings have an elevator that prevents the heel from descending to ski level, making it easier to walk up steep slopes.

There are accessories that can be essential to enjoying Skimo safely. We are talking about blades, crampons and long-handled ice axes for climbing slopes with hard snow or making diagonals in icy areas.

Finally, we should mention the use of safety straps. Touring ski bindings do not have brakes and in the event of a fall, they prevent the ski from sliding downhill. 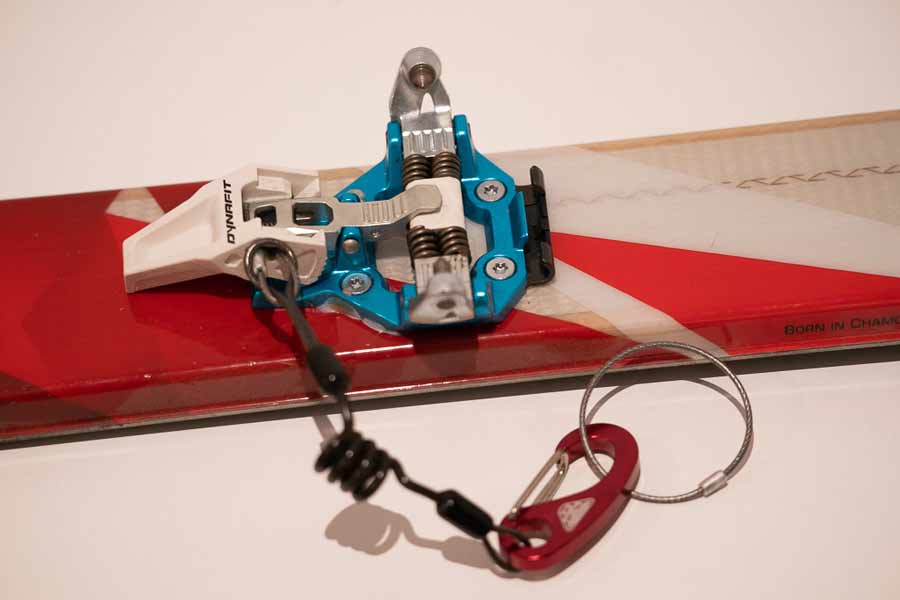 The descent in Skimo

Once you have reached the summit or destination, you can stop in a flat area, sheltered from the inclement weather. Before hydrating, eating a snack or enjoying the scenery, it will be useful to wrap up warm and replace wet clothes. Afterwards, the sealskins are removed. Normally, they are removed from the top of the touring skis and pulled downwards, following the longitudinal axis of the ski. We must remove the remains of snow and ice and we can collect them by rolling them up – avoiding folding them – and thus increasing the durability of the material. There are plastic protections, where we can stick the seal skins and protect the adhesive surface from dirt and dust for later use. 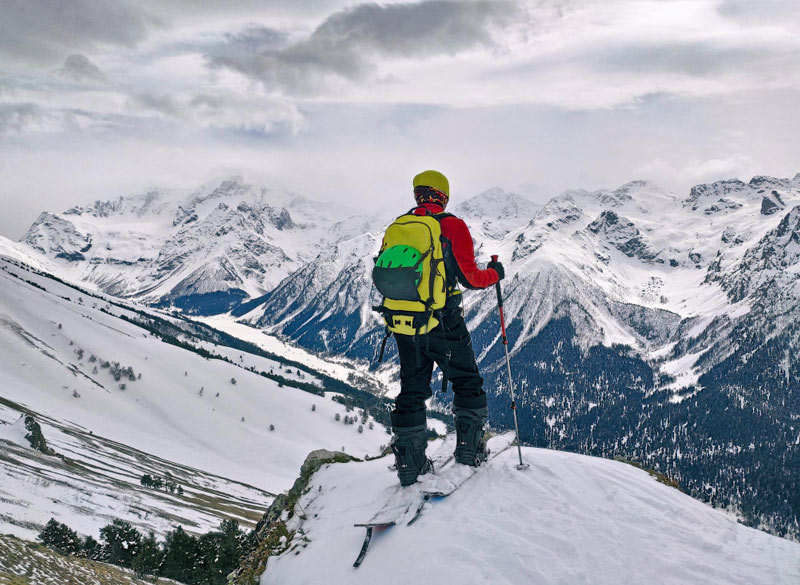 Before the descent, the binding must be locked so that the heel pad remains attached to the ski. The touring boots, as in alpine skiing, are the most important material for enjoying the activity and must be well adjusted to the foot. On the way up, we can loosen the hooks – beware of blisters – but on the way down, they should be adjusted as much as possible to transmit all movements and weight changes to the ski. Finally, it should be noted that many Skimo boots have a system that allows you to lock the boot and make it more suitable for descents. It should not be forgotten that the backpack must be well fixed to the back to prevent it from becoming unbalanced during the descent.

The interpretation and experience of the terrain on the ascent and the reading of the topographic map will help us to choose the best descent route with information such as slopes, length, the presence of tree roots, rocks and ice slabs, areas exposed to avalanches, … Remember that the descent will not be on an alpine track -smooth with treated snow- and you will have to adapt your technique and trajectory depending on many factors.

So much for this introduction to ski touring, we hope you find the tips and information useful. But above all, pay attention, enjoy your surroundings and make the most of the descent!

Go up in ski touring and go down on a snowboard: enjoy splitboarding!

This mode is somewhere between mountain ski and snowboarding and is the favourite of those who want to escape the overcrowding of the ski resorts. It uses a special board called a splitboard.

This board is literally cut in half lengthwise, resulting in two skis with a skate width of about 13cm. For the ascent, the splitboard is used separately, using the same technical gesture as in touring, and for the descent, the boards are joined together on the inside to descend the slopes in snowboard mode.