I Love Ski ®
Home News Freeride Freeride World Tour and sustainable development: “We must be conscious of our... 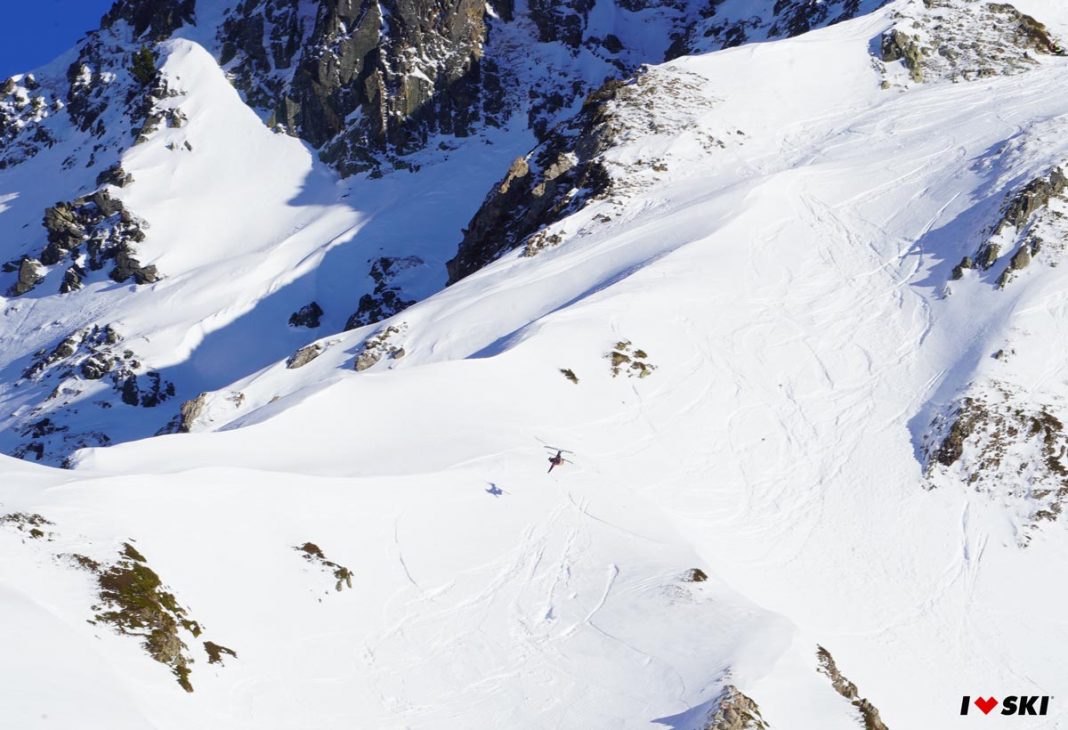 Who hasn’t heard of the Freeride World Tour (FWT), the legendary freeride competition on the world’s most breathtaking slopes? Behind this incredible organisation and each event is a team of nearly 200 people, ambassadors and a comprehensive sustainable development programme. With a desire to reduce carbon impact as much as possible and promote safer and fairer sport.

ILoveSki attended the first edition of the Freeride Word Tour 2022 in Baqueira Beret, Spain. On this occasion, the team tried to understand how an international event, which includes several stages in Europe and across the Atlantic, transport by plane and supply by helicopter, manages to follow a sustainable development policy and reduce the carbon footprint associated with its activity.

Implementation of a sustainable development programme with 3 long-term objectives

The transport of people is one of the major contributors to air pollution. And in the ski industry, transport is the activity that contributes most to greenhouse gas (GHG) emissions. It cannot be stressed enough that engaging in a sustainable development policy implies taking into account three basic elements, which are interdependent and all essential to the well-being of individuals and societies: economic growth, social inclusion and environmental protection. The Freeride World Tour’s (FWT) sustainability programme is translated into 3 major objectives:

To better understand the Freeride World Tour’s commitment to Sustainable Development, ILoveSki met with Joris Vautier, General Manager of the Freeride World Tour. Aware that the FWT is not irreproachable from an environmental point of view, he goes back to the essence of freeriding and explains how he willingly accepts to be “challenged” on his activity in order to find sustainable and respectful solutions for the planet.

In order to achieve carbon neutrality by 2028 (or 2030 at the latest), the Freeride World Tour (FWT) has first elaborated a Carbon Footprint, a diagnostic tool that analyses the direct and indirect greenhouse gas emissions generated by all its activities.

In response to this, the Freeride World Tour is committed to offsetting all of its greenhouse gas emissions. 100% of the trips made as part of the Freeride World Tour are offset through the Myclimate.org platform in a reforestation project in Nicaragua, certified by Plan Vivo. This includes the transport of staff, media and free riders, as well as the use of a helicopter to bring supplies to the competition site and for filming and recording.

In the particular case of this event and the inaccessibility of the competition, the use of a helicopter for security and supply makes sense. However, it is questionable whether it is necessary to use such aircraft for filming when a helicopter consumes between 150 and 400 litres of paraffin per hour depending on its size and power. To illustrate this point with an example, machines like the DJI Inspire 2 drones, equipped with Zenmuse X7 cameras, film in 5.2K and can reach speeds of 94 km/hour. They can withstand extreme weather conditions and are used in Hollywood film production.

Will drones replace helicopters at future FWT events for video and photography?

Participation in a mobility campaign

The FWT has also partnered with POW (Protect Our Winters) in its mobility campaign to promote travel to the FWT Fieberbrunn and Xtreme Verbier events by using public transport.

Finally, a major survey will be carried out during Xtreme Verbier to find out and identify the means of transport used by the public to get to the event, and to take actions to reduce the carbon footprint of this world freeride event.

The problem of transport to the resorts

The ecological benefits of public transport are no longer in question. Car sharing is an increasingly popular solution to decongest mountain roads and reduce the time it takes to get to the slopes. Freeride World Tour athletes tell us that they like to share their vehicles with their American colleagues during competition in Europe, and vice versa.

But what about “classic” public transport, such as trains and buses, why don’t mountain valleys and tourist areas invest today in infrastructure such as high-speed trains and public transport to pick up visitors? Hydrogen technology is starting to establish itself in some areas, and the mountains should be a forerunner of these so-called “cleaner” energies.

As part of its sustainable development approach, the Freeride World Tour is working to implement a safety education programme: WeMountain.

The organisation offers free e-workshops for athletes (Freeride World Tour and all Freeride World Qualifiers / Freeride Junior Tour athletes), staff and volunteers. During this winter 2022, safety will be on the agenda of the following workshops:

This third pillar of the Freeride World Tour’s sustainability policy, and not the least, aims to promote gender equality in the sport, and in freeride in particular.

A special committee has been set up to work on gender equality projects, including the creation of a platform to encourage girls to ride together. The “Girls just wanna have pow” platform organises four days of women’s meetings during the winter so that they can share their common passion.

Manuela Mandl, from the eastern plains of Austria, is one of the best snowboarders in the world. Manuela Mandl, passionate about snowboarding and the mountains, reflects on her performance at the first stage of the Freeride World Tour (FWT22) in Baqueira Beret. She talks about the growing role of women in freeride competitions. As a sustainability ambassador for the Freeride World Tour, she shares with us her values and encourages all women to get involved in the sport.

To convey all the messages and actions implemented to contribute to sustainable development, the Freeride World Tour organisation has surrounded itself with 6 athlete ambassadors. With their words and their sensitivity, these ambassadors are bearers of the values of the FWT and ensure a role in raising public awareness of Sustainable Development.

Thanks to these Sustainable Development Ambassadors, “we want to have allies who promote the values we want to promote. Today, it is not only the Freeride World Tour that communicates”, explains Joris Vautier.

Freerider Maël Ollivier, from Val d’Allos, answers ILoveSki’s questions about his performance in the first stage of the Freeride World Tour (FWT22) in Baqueira Beret. He talks about the next stage of the FWT22 that will take place in Ordino Arcalis in Andorra. Finally, he talks in detail about his involvement in sustainable development and the need to preserve our planet, our “playground”.

Freeride World Tour: a constant concern for the Planet

1 tree planted in British Columbia for every order placed in the Freeride World Tour online shop.

With every order placed on the FWT website, FWT commits to planting a tree in a region dear to the organisation’s heart: British Columbia in Canada. This densely forested region of mountains, plateaus, lakes and rivers is one of the FWT’s stops (Kicking Horse, Golden, BC.) In the summer of 2017, British Columbia suffered the worst fire in its history, with more than 1.2 million hectares burned.

“We want to help them rebuild this forest, in partnership with One Tree Planted. Trees help clean the air we breathe, filter the water we drink and provide habitat for more than 80% of the world’s terrestrial biodiversity.
Forests provide jobs for more than 1.6 billion people, absorb harmful carbon from the atmosphere and are key ingredients in 25% of medicines,” says the FWT.

Implementing an effective waste management system at every stage

Awareness-raising activities on the topic of waste prevention are organised at every stage of the FWT. For the Verbier Grand Final, the event village will be the subject of a major first with a considerable reduction in the use of plastic. The use of reusable or compostable cutlery and containers will be mandatory for the occasion.

Last but not least, every month, the Freeride World Tour will be in privileged communication with nearly 5,000 subscribers. The latter, riders, staff and partners are informed and made aware of the good gestures in terms of sustainability. A way for the FWT to rely on new communication relays to preach the good word… and especially the good practice of the month!

The Freeride World Tour draws its essence from nature, the primary wealth of its activity. Naturally, the organisation is now looking to better adapt its practices to offer the world’s best freeriders and spectators a sustainable, low-carbon event experience.