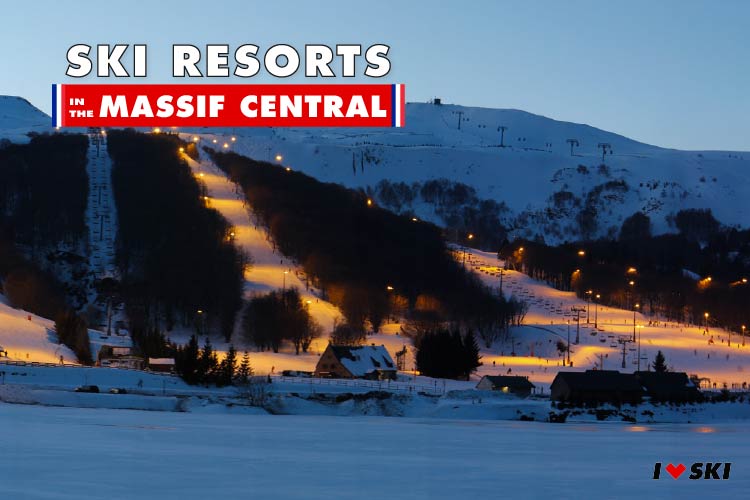 The French ski resorts of the Massif Central are located in the heart of a mountainous massif of 85,000 km², which occupies the centre of the southern half of the metropolitan area of the country. The Massif Central represents almost 15% of the French metropolitan territory, which makes it the largest massif in the country. Its highest point is the volcanic peak of Puy de Sancy at 1885 metres. Most of France’s volcanoes are located in the Massif Central. It is home to the cities of Limoges, Clermont-Ferrand and Saint-Étienne.

The French ski resorts of the Massif Central: climate and biodiversity

After the Alps, the Pyrenees and Corsica, the Massif Central is the fourth highest massif in France. The Massif Central is composed of several climates: the western side has an oceanic climate, the north-eastern side a continental and “intra-mountain” climate, and the south-eastern side a Mediterranean climate. This diversity of climates can be seen above all in the landscapes and vegetation. The Massif Central has a high level of biodiversity. Although some species have disappeared (the otter, the golden eagle, etc.), others have been successfully introduced (the marmot, the chamois, etc.).

Rather known for its large volcanic areas, since it is the largest volcanic area in Europe, the Massif Central also has several ski resorts. There are, for example, Le Lioran in the Cantalien massif, and Super-Besse and Mont-Dore in the Sancy massif. The Massif Central stretches across Auvergne-Rhône-Alpes, Bourgogne-Franche-Comté, Nouvelle-Aquitaine and Occitanie, offering a wide variety of landscapes.

The ski resort of Le Lioran is located in the heart of the Cantal mountains, mainly in the commune of Laveissière. Its ski area, which alternates between forests and untouched peaks, is one of the best equipped in the Massif Central. The resort of Le Lioran offers more than 60 kilometres of pistes. You can enjoy skiing in winter, but also discover a preserved nature, in the heart of the Parc Naturel Régional des Volcans d’Auvergne.

The ski resort of Chalmazel is located in the Haut Forez, one hour from Saint-Etienne and Roanne, and ½ hour from Montbrison and Feurs. The ski resort of Chalmazel exists since 1965. This Massif Central ski resort offers more than 12 kilometres of skiable slopes and a large area dedicated to cross-country skiing. Do you know scooters and BMX? Then you’ll love the Snow Scoot! Let yourself slide thanks to the two boards of your scooter and enjoy unique sensations while admiring the landscape around you.

Chalmazel offers a wide range of hotels and flats such as: The hotel La Vie En Rose or the hotel Les Voyageurs.
The ski offer proposed by Chalmazel is above all family oriented. The strong points of the area are the 2800 metre long Granges piste, combined with the pistes at the foot of Pierre-sur-Haute, the more technical Couzan sector, and the presence of a sector dedicated to beginners.

The ski resort of Chastreix – Sancy is located at 1350m in the Massif Central. The resort offers almost 16 kilometres of skiable slopes divided into 16 runs, a boardercross and two toboggan runs, all accompanied by seven ski lifts. Chastreix-Sancy is a family resort par excellence. It has an incomparable view of the Sancy. With its ski school, bars and restaurants, Chastreix-Sancy offers the conviviality and tranquillity of a village.

The ski resort of Chastreix – Sancy offers a wide range of hotels and flats such as: Le chalet Des monts Dore or Les Greens.
If you like cross-country skiing, then you will love the Sancy Nordic area: 250 kilometres of trails spread over two sides of the Massif.

The ski resort of Les Estables – Mézencs is located in the Haute-Loire department. This small ski resort in the Massif Central offers 8 kilometres of pistes. The Mézenc massif offers beautifully preserved panoramas and landscapes! Its local specialities, such as the Fin Gras du Mézenc, will make you happy after a busy day, as will the rural habitat of this resort with its farms with roofs of lauze, broom or thatch.