I Love Ski ®
Home News Learn to ski What is a ski resort? 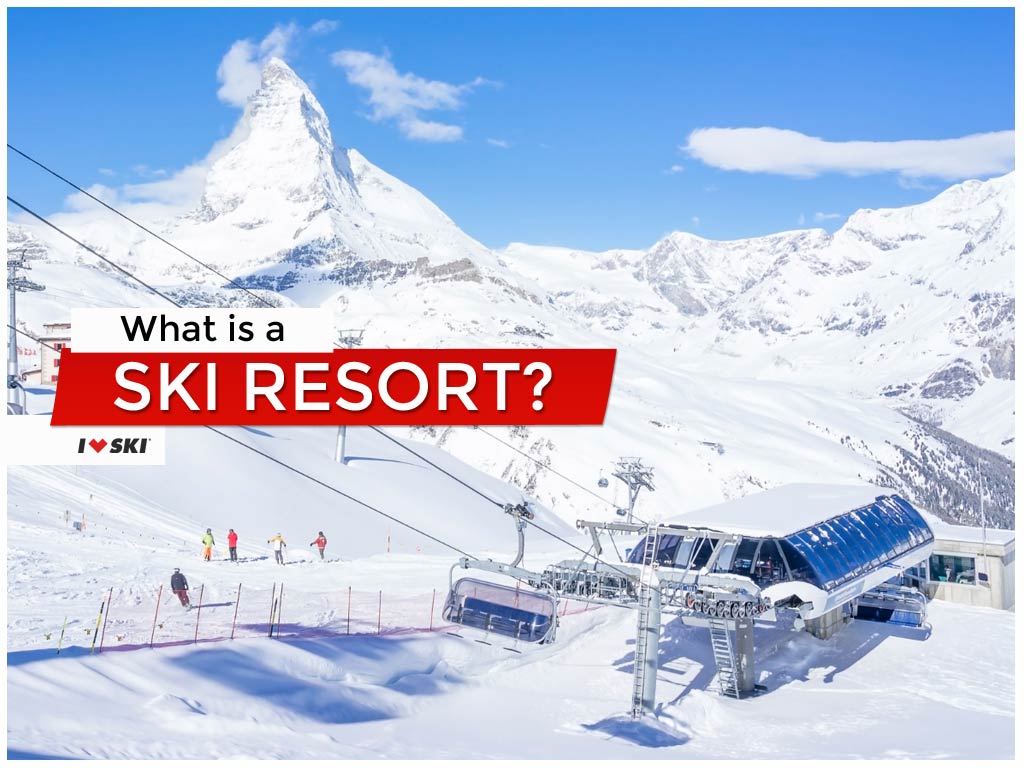 A ski resort is a groomed area of the mountain that allows you to enjoy the snow and its ski slopes.

The ski resort offers equipment and ski lifts that allow visitors to ascend in altitude and glide down its ski slopes.

Alpine ski resorts are located in mountains that offer a certain amount of vertical drop and infrastructure (ski lifts and services) to enable you to ascend at altitude and glide down the snow. Alpine ski resorts are designed for the practice of sports disciplines linked to the descent of snowy slopes, such as alpine skiing, snowboarding, telemark, snowscooting or various forms of adaptive skiing.

Ski resorts have ski lifts, such as drag lifts, chair lifts or gondola lifts for climbing at altitude without physical effort. The resorts are often linked to a resort or town centre, where tourists will find accommodation as well as services related to leisure: equipment rental, ski and snowboard schools, restaurants and cafés, shops, thermal leisure centres, etc. Some ski resorts have a town centre at the foot of the slopes or, failing that, are connected by road and/or ski lifts to the slopes.

In the ski resorts you will find ski slopes. These are snow-covered trails that have been groomed with snow groomers to facilitate the descent. Technological advances make it possible to create cultivated snow and distribute it on the ski slopes when the weather conditions are not favourable, making it possible for the resorts to stay open for longer periods of time.

The slopes of the ski resorts – or ski centres – are classified according to their level of difficulty, the green ones being the easiest and the black ones the most difficult:

The ski slopes are signposted, providing information to the skier (closed slope, slope with stones, crossing of slopes, …). The slopes are delimited on their edges by beacons, which are vertical poles evenly distributed on both sides and are very useful on days of low visibility to have them as a reference.

As we descend a ski slope we will also find circular signs, indicating the colour of the slope, its name and we will also find a number. The number indicates how many metres of piste are left to reach the end of the slope. To know this, it is sufficient to multiply the figure you see by 100 to find out how many metres of descent you have left to reach the end of the track. If you travel to high altitude ski resorts, such as the world’s highest resorts, you will find snow throughout the winter season but you should be prepared for cold and altitude sickness.

In order for resort users to find their way around the ski area, there is a ski slope map showing the layout of the ski slopes marked out on the mountain, as well as the ski lifts, in schematic form.

On the piste map, you will also find the itineraries or untreated pistes (normally marked with an orange line), the most relevant summits and peaks, the ski lifts as well as other information of interest (lockers, snowparks, freeride areas, protection zones, restricted access areas, infirmary, catering points, …). 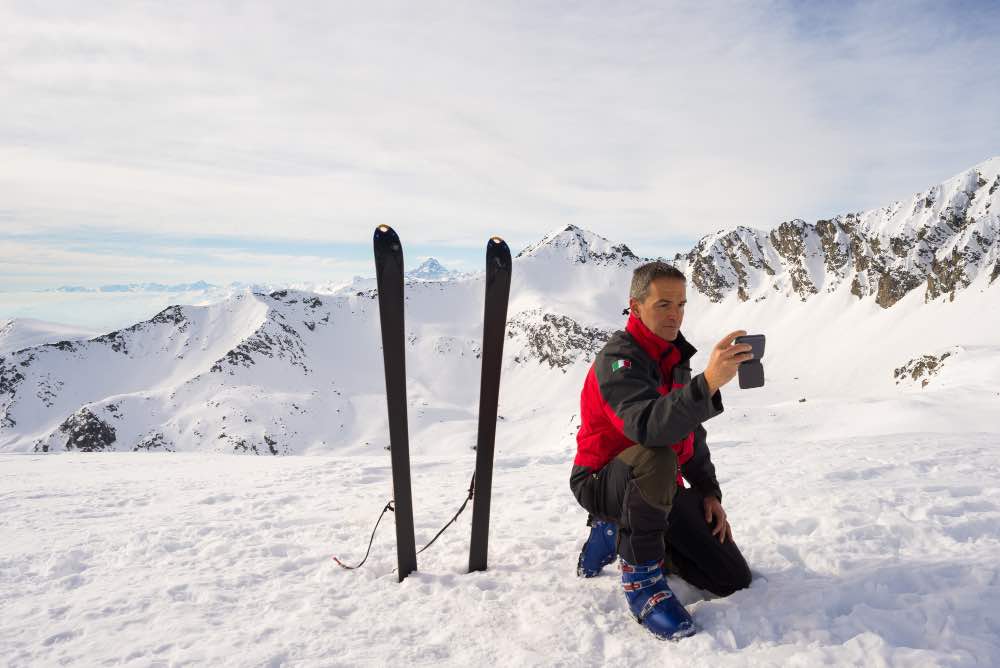 New technologies have enabled ski resorts to offer real-time information to skiers, through digital piste maps that allow you to geolocate the athlete on the slopes, create routes, know where a family member is at that very moment, know the average speed of descent and other functionalities. In any case, given that with technological equipment we depend on the battery, we recommend always carrying a trail map in a dry place, such as the inside pocket of your ski jacket.

Types of ski lifts you will find in a ski resort

A ski resort, is always equipped with ski lifts to facilitate transport between the different areas. Access to them is provided by a ski pass. Ski lifts usually consist of a steel cable supported by bollards. This carrying or driving cable moves along the pylons thanks to the two stations found in the ski lifts.: the drive station and the return station. The drive station is the heart of the ski lift, where we will find important elements such as the electric motor, the auxiliary motor, the gearbox and the braking systems.

The different means of transport found in a ski resort are as follows:

This is a mechanical ski lift for the beginners’ area, providing access to short, low-difficulty slopes (green slopes). It is a rolling synthetic carpet, which the user accesses on foot. Its elevation above the ground does not exceed 50 centimetres, the slope is slight and its speed of movement is very slow and smooth, facilitating access and descent for skiers. There are conveyor belts with a cover, improving the trainee’s experience by sheltering them from inclement weather such as cold and wind.

This is a mechanical land ski lift useful for flat areas of great length or with reduced gradient. It can have a bar attached to the rope, where the user can hold on or be pulled.

The chairlift is a mechanical ski lift that consists of a steel cable from which traction hangers. The bollards distributed along the route support the weight of the cable and the users. The cable is moved by the electric motor of the drive station. There are single chairlifts, which have a circle at the end, or double chairlifts like the one in the picture, where you can go up in pairs, propelled by the anchor. In the latter, for the sake of comfort, it is advisable for users to be of similar height.

Chairlifts are the most common ski lifts to be found in a ski resort. It is an aerial ski lift that consists of a station at the starting point and another at the end point. The ascent path is called the “line” and includes various components, such as the bollards, the rockers, the steel cable and the vehicles, in this case chairs or seats. At the beginning, chairlifts were single-seater and very simple, with obvious shortcomings in terms of safety that have evolved with the industry. At the same time, there were baskets that worked on the same principle as the chairlifts, but instead of being seated, the skier ascended standing up with skis in hand. 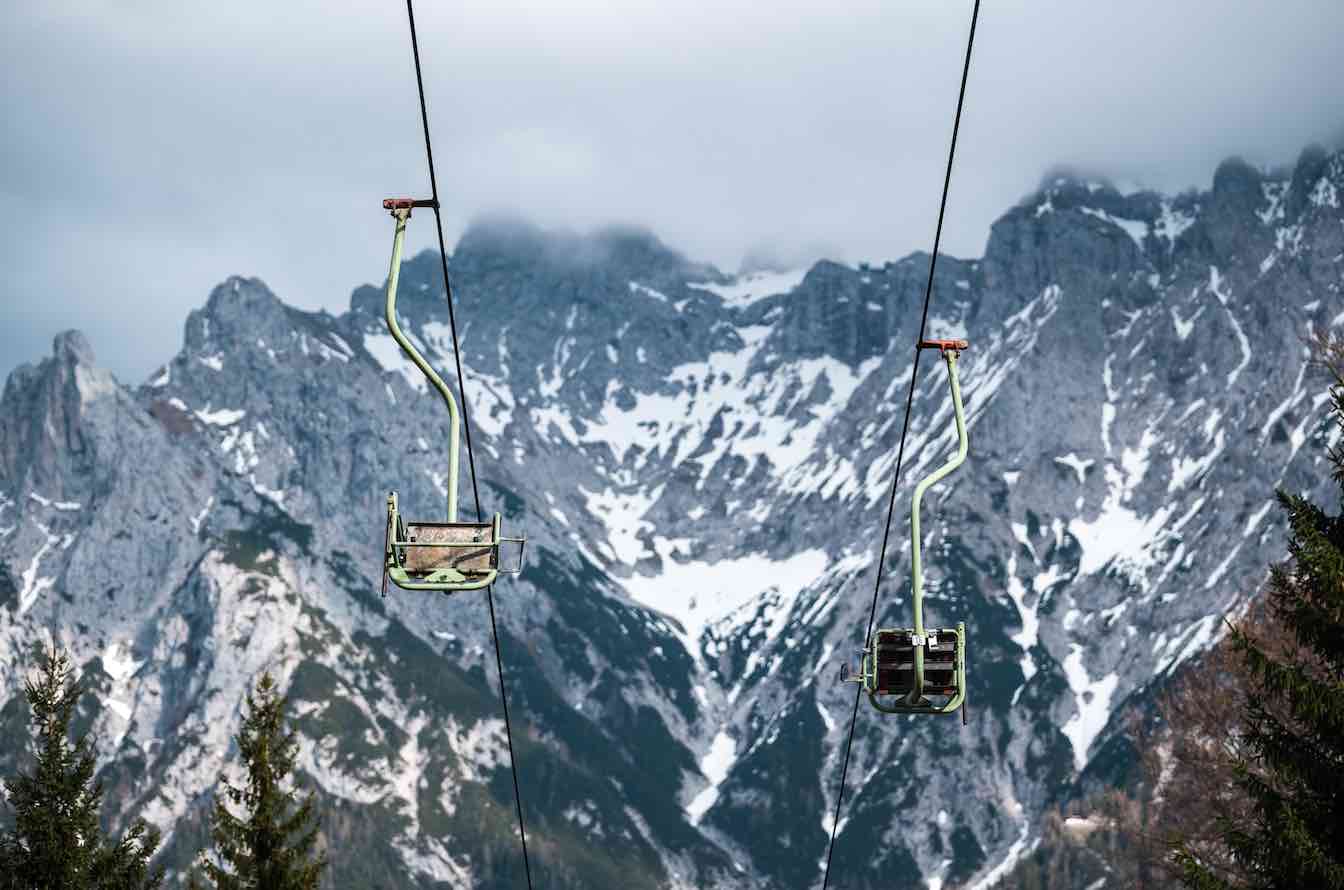 The structure of a chairlift is very solid: the bollards distributed along the route support the load and the motors of the drive station allow the cable to make the closed ascent and descent circuit. All chairlifts are equipped with a safety system, with a bar that also allows you to rest your feet. Technology is revolutionising the snow sector and nowadays, there are chairlifts with multiple safety systems, covers, heated seats, piped music and interactive screens.

This is the most basic and elementary chairlift. Its speed is limited, so as not to hinder the ascent and descent of passengers.

The chair clamp opens when arriving at the departure or arrival stations of a ski resort or ski centre, releasing the fast cable and entering a closed circuit at a reduced speed. The speed of transporting skiers is higher, exceeding 5m/s during the journey, and it is also safer, as users get on and off the chairlift at low speeds of around 1m/s.

It is a mechanical lift that works in a similar way to a chairlift, but instead of hanging chairs from the cable, closed cabins are used. The structure of gondola lifts, such as the bollards, cables and stations, is more robust than that of chairlifts. They also tend to cover longer distances, overcoming large slopes in ski resorts or ski centres.

In case of strong gusts of wind, gondolas have more safety systems than chairlifts and are very comfortable, especially on windy days. Unlike the chairlift, skiers and snowboarders must enter the cabin on foot, first placing their equipment – skis or boards – on a support outside the cabin. There are 4, 6, 8 and 20-seater gondolas. The direct current electric motor acts on a reducer, moving the carrying or traction cable at certain revolutions per minute.

This is a mechanical aerial lift consisting of a steel cable linking two stations. The cable is supported by a series of bollards as well as the two vehicles it carries. By the way, did you know that the cable car is a Spanish invention?

The system is energy-efficient, with two cables – one traction cable and one carrying cable – with the descent of one vehicle assisting the ascent of the other. The cable cars, unlike chairlifts and cable cars, stop when they reach the departure or arrival station.

It is a mechanical land-based ski lift and can negotiate steep slopes of more than 60 degrees. It slides along rails and the principle of operation is similar to that of a cable car: while one cabin makes the ascent, another cabin makes the descent. The funicular can be found in a ski centre or ski resort, as well as in urban areas to overcome steep slopes.

Climate change and the seasonality of the snow industry are encouraging ski resorts or ski centres to deseasonalise their activity and become active mountain resorts all year round. The aim of many ski resorts or ski centres is to reorient their business to stop being linked to a specific period of the year, especially after the introduction of teleworking in the mountains. The creation and diversification of the range of services on offer in the mountain resorts are turning these natural environments into true 4-season tourist destinations.

The development of activities linked to leisure, relaxation, the mountains, sports in the natural environment and balneotherapy stimulate the progression of ski resorts towards a more economically sustainable model that reinforces their role as an economic and social driving force in mountain areas. A model that fights against the depopulation of rural areas, encouraging the settlement of inhabitants and the creation of wealth.