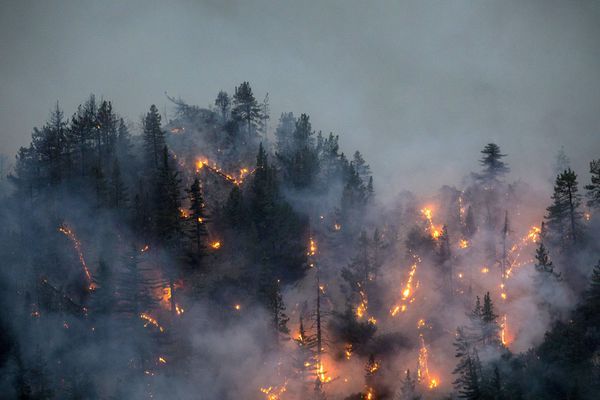 California fires. California is currently in the throes of uncontrollable flames. The whole region is suffering the full brunt of its second wave of fires of the summer, with temperatures recorded much higher than usual.

The US Forest Service has announced the closure of many territories, including eight National Forests and campgrounds across California. To this day, fires still rage across the state. Among them is the Inyo National Forest in the Eastern Sierra, where the Mammoth Mountain ski resort is located.

“IN ACCORDANCE WITH THIS ORDER, THE MAMMOTH MOUNTAIN SKI AREA WILL SUSPEND SUMMER OPERATIONS, ESPECIALLY THE BIKE PARK, GONDOLA RIDES, VIA FERRATA AND CAMP HIGH SIERRA”

The Mammoth Mountain ski resort is located in the heart of the Rocky Mountain range, on the flanks of a dormant volcano (Mammoth Mountain, atop the summit at 3369 m above sea level) and 30 minutes from the Mammoth Yosemite Airport Regional Airport (daily connections to Los Angeles and San Francisco). The resort, whose average altitude is 2424 m, is made up of a village (The Village at Mammoth), a main resort center (Main Lodge) as well as different districts (The Mill, Canyon Lodge and Eagle Lodge ), all connected to the ski area by ski lifts. In the summer, the resort offers many activities which have been damaged by the numerous fires in the region.

The ski resort will remain closed until all the fires have been brought under control, and the safety conditions are again in place for the resumption of activities. Smoke from the fires has dramatically degraded the air quality and there is no indication that the situation is improving so far.

The fire continues to move towards Mammoth down the San Joaquin River Valley, the same path winter storms take to bring snow to Mammoth Mountain. Nearby, Yosemite Park is also on alert. Access to Yosemite Park could soon be prohibited and its visitors evacuated.

Mammoth Mountain is not the only ski area in California to be affected by these large-scale fires. One of the largest forest fires in the state is the “Creek Fire”. Located in the mountainous part of Fresno County, the latter has reached the vicinity of the China Peak Ski Resort and some cabins located on Huntington Lake.

The latest report from the station says employees’ homes were partially damaged. Apparently the damage would not affect the ski lifts or the marina. Experts are currently assessing the damage following the destruction left by the flames.

According to the California Department of Forestry and Fire Protection (Cal Fire), the stream fire, declared in Northern California on Friday, has burned nearly 55,000 acres and has already destroyed 65 properties and is out of control.

“The forest fire situation across California is dangerous and must be taken seriously. New fires are likely to break out. The weather is getting worse and we just don’t have enough resources to fight and contain all the fires, ”said Randy Moore, USDA Southwest Pacific Forest Service regional ranger.

Some mountain communities already have mandatory evacuation orders and roads have been closed.