After the end of the 2018-2019 hydrological year (period from October 1st to September 30th), Spanish reservoirs are at 41.1% of their total capacity, which translates into something more than 23,000 hm3. This constitutes the fourth lowest value of the 21st century.

According to the latest data from October 14th, this figure is even lower, with less than 40%, when the average of the reservoirs for this period is 53.2%. This shows the drought situation we have gone through and we are still in.

The situation varies greatly in different parts of the Peninsula. The northern basins are above 60%, which is very close to their average. Meanwhile, in the center and south, things change. The Tagus basin is 34.5% of its capacity, when it should approach 50%.

In Madrid, the case of the swamps of San Juan is pretty extreme, which is a 21% (for a normal value of 50%), or Santillana, with 35.1% and which is usually above 60% in these is extreme dates But the most worrisome case is the Buendía reservoir, with only 13.9% of its capacity. 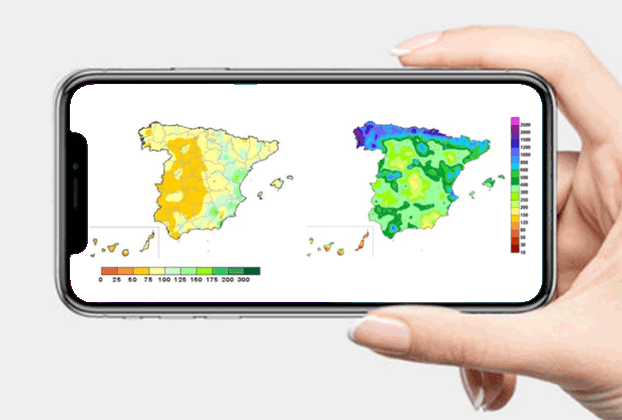 Image: Precipitation and percentage with respect to normal values of the last hydrological year (2018-2019). AEMET

As it happens to be frequent, the Segura basin is the one in the worst conditions, with the reservoir at 27.6% of its capacity and 315 hm3. And this, after the abundant rains that occurred in the episodes of cold drop, before which this basin was slightly close to 20%.

And how much has it rained? According to data from the State Meteorological Agency, the last hydrological year is the fourth driest of this century and the eleventh since the records began. On average, a total of 565 liters per m2 have fallen in the whole of Spain, which constitutes 87% of the normal value. But while areas of the east are above the average, other areas of the peninsula have not reached 50% of what usually rains a normal year.

The Cold Drop that affected the eastern peninsula in September left a record rainfall in the Valencian Community with up to 391 liters per m2 in 24 hours at the Vall de Gallinera. They exceeded 300 liters in other locations such as Ontinyet and approached them in Molina de Segura in Murcia. In many points of this territory the 500 liters have been reached only in the month of September.

In the city of Murcia, for example, they have exceeded 200 liters in this month, falling 169 of them on September 12 (record of the city since they have records). This means almost all of what rains throughout the year (297 liters).

The damages that this episode has caused are also very noticeable. The storm left 6 deaths, thousands of people affected and has even killed thousands of fish and crustaceans in the Mar Menor. This could have been caused by a decrease in the oxygen level of the waters, although an investigation is going to be carried out to verify that the storm has not been used to carry out spills of pollutants in the waters.

Currently, this area of Spain is predominantly irrigated. Due to the climate of this territory, the transfer of the Tajo-Segura is the only guarantee that the land can be cultivated and used.

And it is important to say that water management in Spain has always been complicated, since the Mediterranean climate implies a marked period of drought. The Romans were the first to make constructions to dispose of water during the summer period. Well-known are its aqueducts like the one in Segovia, from the 2nd century AD. C. But they also built a good number of dams. Currently, up to 73 remains of this type of construction have been identified. These were established near their main cities, such as Zaragoza or Mérida.

Some of these constitute some of the oldest in Europe. Among them we can mention the Muel Dam, in Zaragoza and the Proserpine Reservoir built between the 1st century BC and the 1st century AC.

Spain is currently a power in terms of reservoirs. At the beginning of the 20th century there were about 50 dams throughout Spain. From the middle of the century a construction phase began at the rate of 20 dams per year, until reaching 1225 today.

Some of the most notable threats that reservoirs face, apart from drought, are invasive species such as zebra mussels, which are estimated to have caused damage worth 1.6 billion euros in the last 10 years alone in the Ebro basin. This species of mollusk has a control strategy to prevent its expansion.