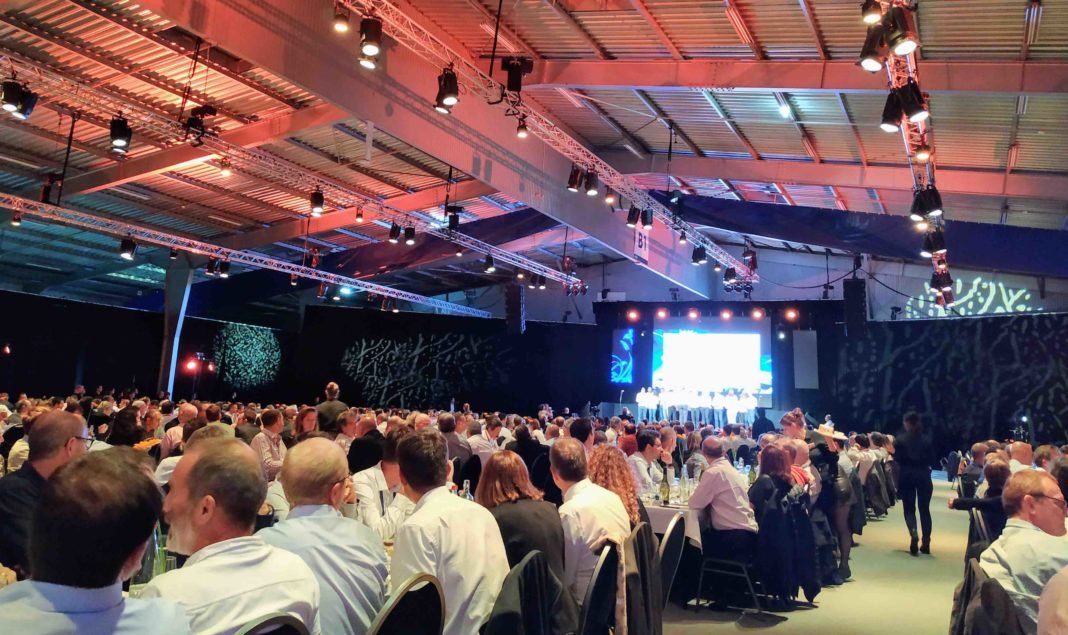 The French ski resorts met in Besançon, last October 1st and 2nd, because of their 2019 Annual Congress. Collective work, the exchange of experiences between stations and the future of the industry, were some of the contents that were highlighted in the agenda of these meetings that I Love Ski could not miss.

French ski resorts at the foot of the Jura Mountains

The congress was held in the country of France, at the foot of the Jura Mountains, where the French Skiable Domains – an entity that represents the French ski resorts, gathered to organize their traditional National Congress. More than 800 participants had gathered to share and discuss relevant information on the collective work they develop as well as reflect on the future of the snow industry.

Dynamic prices, cyber-attacks, new governance and management models, banks’ reluctance to finance new investments, job security, climate change. All of them were issues that were at the center of the debates in this congress. A common will to move forward, “evolve in a sustainable way” and “find common sense” in the face of administrative layers that overlap development projects and the development of the French mountains.

The commercialization of tourist beds

Among the main concerns of the ski areas, Alexandre Maulin, president of Domaines Skiables of France, said that “the availability of beds is a major problem for resorts.” Thanks to the presence of hot beds, stations manage to commercialize their destination more easily and maintain satisfactory occupancy rates. On the other hand, stations with cold beds that are often unoccupied or partially occupied by private owners face more difficulties.

“WE ARE LOSING 30,000 COMMERCIAL BEDS A YEAR (…). WE HAVE TO STOP SELLING TO INDIVIDUAL OWNERS”

, said Alexandre Maulin. The need for ski areas to work on the construction of permanently warm beds is a concern that has appeared in various forums during the congress. Among the solutions evoked: a remodeling of the property, as did the Accor group.

Image: Secretary of State Delegate to the Minister of Europe and Foreign Affairs, Jean-Baptiste Lemoyne while making his statements

The assistance and the average price of the packages are among the main concerns of the French ski resorts. Dynamic pricing is a practice that is becoming a consumer habit nowadays for anyone looking for the right plan and the best price. But this is a practice still not too developed in the mountain sector. Why? Often because of a fear of degrading the price, because of ignorance of the mechanism, but also because of the management methods of some stations. The price validation procedures currently do not favor the evolution of the price according to the period (fixed rates and previously validated).

Yves Dimier, Director of the Val Cenis ski resort, and president of the French Skiable Domains Economic-Promotion Commission, shared his personal experience, as the first French station to launch this dynamic pricing concept.

“I DID NOT HAVE ANY PROBLEMS TO VALIDATE IT, IT IS CURRENTLY IN THE ROUTINE, CUSTOMERS SPEND TIME LOOKING FOR GOOD PLANS (…). THE RESULTS OBTAINED ARE PRETTY OVER OUR INITIAL EXPECTATIONS”

, Yves Dimier said during the Congress that brings together all those responsible for French ski resorts.

Christian Wyrch, sales manager of the Swiss resort Arosa Lenzerheide, also testifies to this price practice that they have introduced since the 2017-2018 season at their station. “Customers have responded very well to this dynamic pricing. The average price has not changed but attendance has!”

Climate change and its impact on French ski resorts

Climate change, sustainable development and snow management in French ski resorts. Topics very present in all media, and on which public opinion is very active, especially in social networks.

For the first time, these issues were addressed in a transparent and objective way by the ski areas. Laurent Reynaud, general delegate of the French Skiable Domains, led a round table on the sustainability of current and future practices that are to be implemented in the French ski resorts.

Undoubtedly, the highlight of this Congress has been the intervention of Samuel Morin, Director of the Center for Snow Studies in Météo France. He presented a summary of the Report of the IPCC (Intergovernmental Panel on Climate Change), including the consequences in terms of natural snow in the mountains. “In all parts of the world where we have data, we see a decrease in natural snowfall (…)”

“BY 2050, THE NATURAL SNOW IS EXPECTED TO DECREASE FROM 20 TO 40%, ESSENTIALLY IN THE MIDDLE MOUNTAIN”

Samuel Morin explained that by 2050, “the future is written.” The 2050 deadline is crucial, as it should reflect the actions we take of the coming years. “If we manage to reduce greenhouse gases, we will stabilize the climate to the level reached in 2050. If we maintain similar practices to the ones we do today, we will witness an increase in temperatures and a decrease between 50% and 90% of natural snow“. 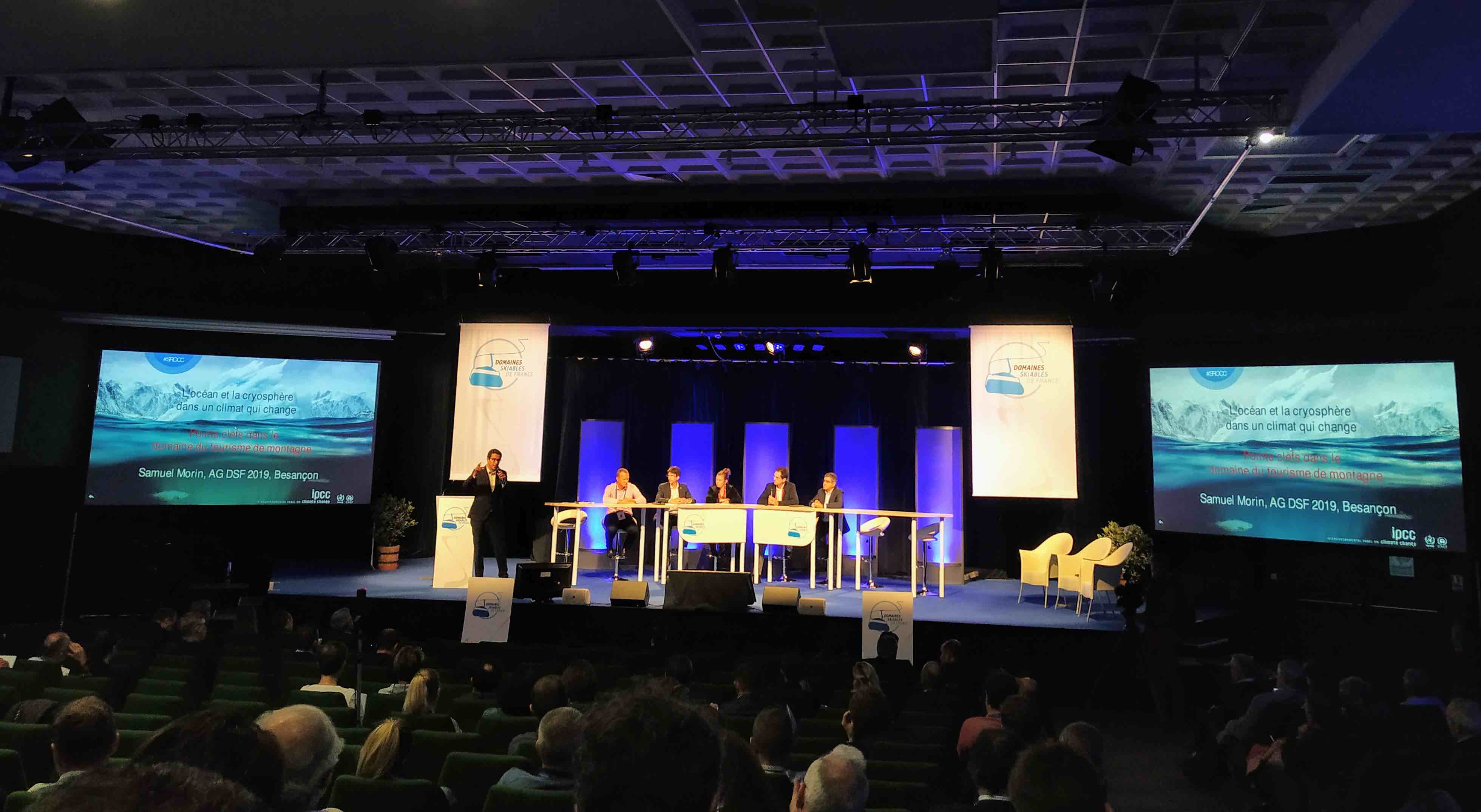 Image: Round table on “Sustainability of practices in areas dedicated to skiing”. October 2nd, 2019. Besançon

Intervention by Jean-Baptiste Lemoyne in support of the French mountain

The Secretary of State Delegate to the Minister of Europe and Foreign Affairs, Jean-Baptiste Lemoyne, made the trip to Besançon to show his support to the French mountains. Commercialization of tourist beds, calendar of school vacations and administrative procedures are some of the topics that have been presented to the Secretary of State.

It clearly shows support to the French mountains and ski resorts that are part of one of the flagships of the French tourist economy. Hopefully a similar situation can be lived in Spain, one where political forces pay attention to the snow industry and the impact it has on the valleys and mountains near the ski resorts.

As our usual reader knows, ski resorts allow the maintenance and development of the economic activity of the valleys and their mountains. The French delegate secretary publicly acknowledged support for snow tourism in France. “If we have 90 million national visitors in France, 56 billion euros of tourist benefits in France, it is also because the French ski resorts offer a season winter with the presence of many Europeans who come to France, but also tourism 4 seasons which the mountain is diversifying and positioning towards”.