I Love Ski ®
Home News Jean-Marc Silva : ‘They should not remain exceptions, we must accelerate the... 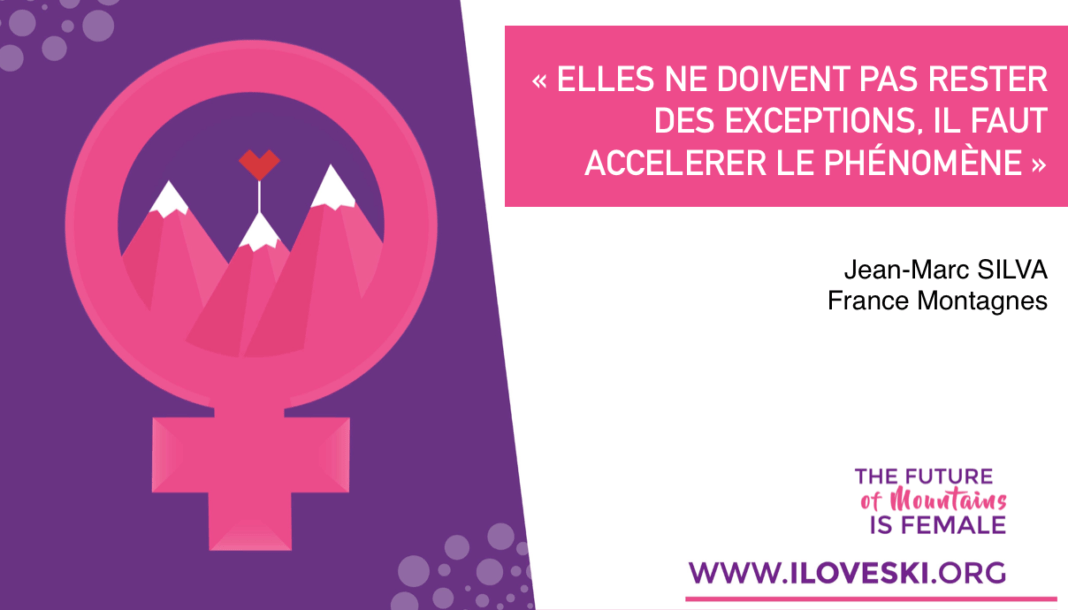 Why do you think there are still such few women at the head of the resorts?

Jean-Marc Silva: Finally, we’re witnessing a change in the global vision of gender parity. Fortunately, nowadays, it’s no longer a peculiarity, but a reality. Especially in the context of the Women’s Football World Cup, which is very interesting now and which values – rightly – women’s sports.
Personally, I think that women’s place in the mountains has always been there: Catherine Destivel, Christine Janin and Live Sansoz have also put their name in the history of mountains, mountaineering and climbing.
When skiing was democratized with the ‘snow plan’, the first ski centers were created by pioneers, mostly men: at that time, women worked and had, for many, a role of mother and family manager. This should explain partly why there were few women among them.
Often, we mentioned ski resorts using the terms of winter sports and ‘ski lifts’. We were in a very mechanical industry. One of the first visible changes occurred when the National Syndicate of Cable Cars of France (SNTF) became Domaines Skiables de France (DSF): it was an important signal. We’ve moved on to a more global service offer and a greater consideration of the clients and their needs.
Today, the mountain is still quite masculine. There is diversity, but there is still no parity everywhere. I think I can say that there’s no job that isn’t occupied by any woman. One of the first female pisters in France was Dominique Alés, in Alpe d’Huez, and that was 40 years ago (around 1979). Today, there are women in all positions in ski resorts, but their representation is still marginal in some occupations. It is quite slow, too slow, the acceleration of this movement by men creating the necessary conditions of accessibility.
Paradoxically, in the field of communication to the general public, we try to address women, because they are the first holiday organizers and the most sensitive to our messages. According to the latest studies, 53% of women decide on vacations. It‘s in our interest to have more women in managerial positions, since they also bring this aspect, perhaps less sportive, or less competitive, being able to be more attentive with social aspects and, often, being more sensitive to ‘the art of living’.
Now we must show a mountain that has no gender and is addressed to everyone. Women will make other women want to come to work in this sector. We must not remain as exceptional, unprecedented or phenomenal with the work of the women in the resort, because our young people will have problems to identify and they’ll consider that this is too exceptional or anecdotic to be able to access these positions, such as director of ski areas.

Jean-Marc Silva: We’re interested on having a very equal communication of our trades. This should be obvious. Managerial positions at ski resorts are no longer reserved for engineering schools, but also, for example, for business school profiles. While this is a profession that faces many physical and meteorological limitations and a mostly male operations staff, we should encourage the women who are there, as they should be an example for others. They should not remain exceptions, but examples to follow. We must accelerate the phenomenon.
The French mountain has much to gain from having more women in management positions. And then it’s necessary for ski areas and mountains to be a reflection of society. We must encourage these movements, because the mountain is not a territory reserved for men.
The more parity there is, the less sexism there will be. This makes it possible to have varied and complementary levels of exchanges, with a complete view on the subjects and interests of society.

Jean-Marc Silva, in your opinion, how do women contribute to the ski areas?

Jean-Marc Silva: Spontaneously, many women tend to have a ‘benevolent’ vision. In general, they are the ones who will have an objective view of the holidays and will seek the happiness of their entire family or group. On the contrary, we often hear that a man generally tends to satisfy his own needs or desires for sport or self-improvement.
We also find many women in the business of communication, relations with the press, customer service, digital aspects…
For example, in France Montagnes, 70% of the team is female (8 women and 3 men).
From the point of view of resorts, services and planning, women usually have a clearer and more intuitive vision of certain issues, such as the cocooning vision, the comfort, the design or the diversity of services of the resort, which is important to develop in France in order to be internationally attractive. France is one of the biggest skiing powers in the world, such as Austria, Italy, Switzerland… All these countries have almost the same level of development, the difference is seen in the details and women will bring real added value. The search for beauty is not a feminine exclusivity, but it’s an aspect that women could develop in mountain resorts in order to optimize our offer of the ‘French mountain’.