I Love Ski ®
Home News Canada breaks its own record with its last day of skiing on... 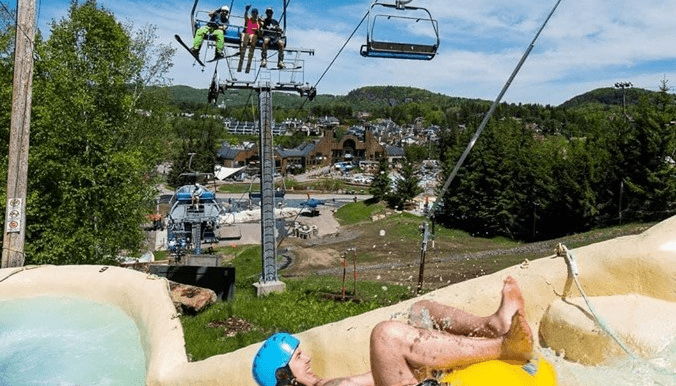 Facebook
Twitter
Photo: Alain Denis
Skiers descending the slopes in swimsuits, skiers who go uo to the slopes while other visitors descend on water slides… Those are the images that the last day of skiing in Canada has left, which this year has been as late as June 8, just a couple of weeks before summer officially begins. It was at the resort of Mont Saint-Sauveur, in Quebec.
The season has lasted three more weeks than last year, when it ended on May 27. It has broken the record of the longest ski season, which until now had lasted only until June 2, in 1998, with a total of 185 days of opening.
Thanks to the low temperatures recorded during April and May, which have been especially cold months this year, it has been possible to preserve the snow that fell during the winter for a longer time. It hasn’t even been necessary to use artificial snow cannons these past few weeks.
This last day of Canadian skiing has been enjoyed in Mont Saint-Sauveur under the sun, with 25 degrees Celsius (77ºF) and, in many cases, in a swimsuit. Two hundred skiers have attended to enjoy their last morning on the slopes and they’ve had the opportunity to go from sliding down the slopes to sliding down the water slides. Precisely, the same day, it was the official opening of the Sommet Saint-Sauveur water park.
Now it’s officially ended the best ski season of the last 10 years in Quebec, with records on both snow and duration.