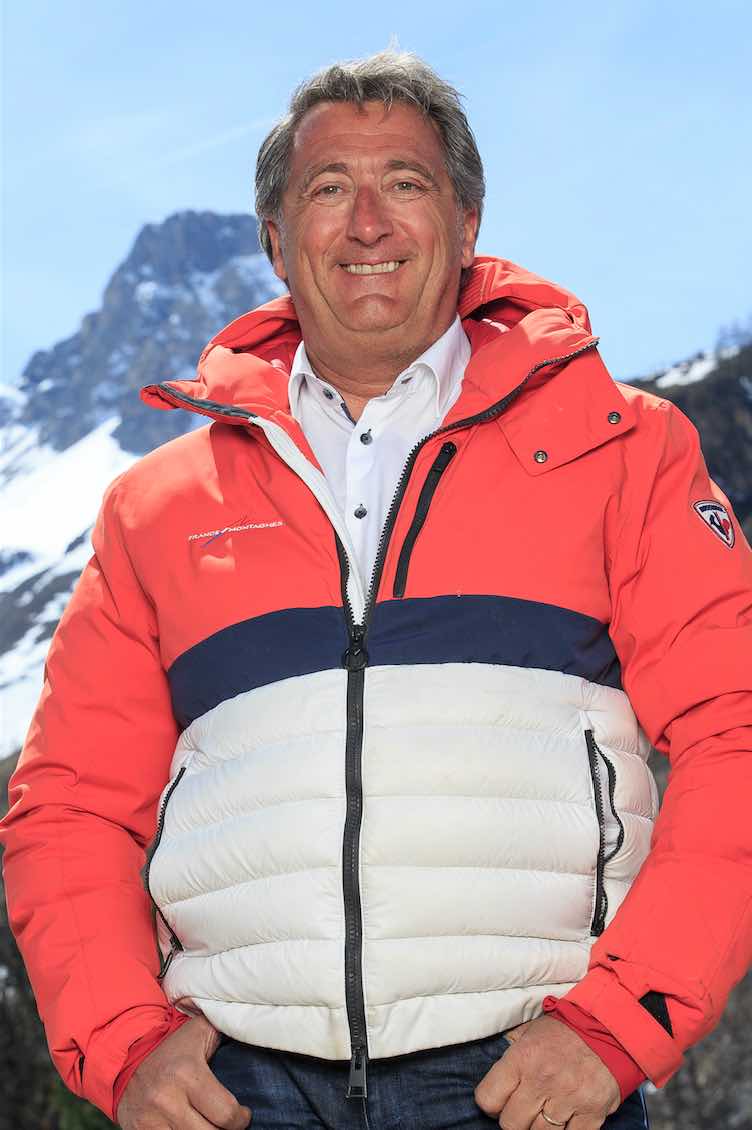 Photo: Jean-Marc Silva. Credit: Scalp
I Love Ski: What are your passions? What do you do in your free time?
Jean-Marc Silva: Besides this career, I’ve also had other lives (laughs). The mountain has been omnipresent in my life. I married Catherine Ogier, whose parents had created a small ski resort, the Col de Coq in Chartreuse with three partners, a 100% private resort: they cut the pines to make slopes and they poured concrete for the ski lifts, they restored a fold to make a restaurant, establish a ski school and have a place to rent equipment. I’ve always admired these people. All this inspired me a lot.
Today, we have two kids who evolve in the mountains after 11 years in the ski club of Les Arcs. One of them is the director of the tourism office of La Rosière, and the other one is a mountain architect and settled in the north of Isère. The mountain inspires us constantly. We also have a small alpine chalet in Tarentaise where we meet, to inspire us in this authentic mountain: it’s the best idea of family transmission that I could give them. It’s a meeting place, very authentic, wild, basic and rustic, but much loved by those who go there. It’s a place where you can practice snowshoeing or skiing in winter. In summer, on the edge of a river at the foot of the forest, you can find the life of the old times. And besides, the cell phone is not allowed! (Laughs) I see that the young people in the family who are raised there want to return as they grow up. It becomes important to them, it’s a meeting place. When I can, I open it to press trips to welcome journalist friends and show them facets that touch us.
And then I have other associative lives in parallel: I’m a national diving instructor (MF1). We have a club in Bourg Saint Maurice with 70 members who come to learn to dive. It’s good to leave the professional world of business to go to an associative world and teach voluntarily. It’s a satisfaction to be able to transmit another passion. But at the same time, I keep in touch with nature, in all its forms. So I feel that my world is a bit like a mountain that falls in the water, so you’re up or down, above or below.
I’m also president of a karate sports association in Bourg Saint Maurice, because I’ve practiced it since I was 20 years old. I think if I hadn’t practiced this martial art, I couldn’t have done all this, because karate has taught me mental and physical control, stress management and how to deal with obstacles. 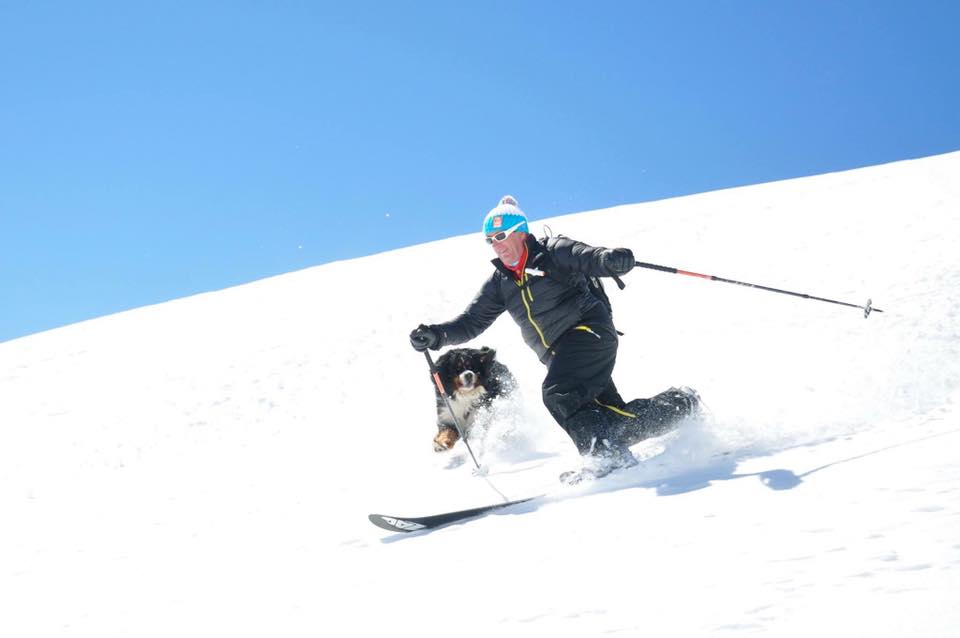 Photo: Jean-Marc Silva practicing the telemark.
I Love Ski: What are your motivations today? Why do you get up in the morning?
Jean-Marc Silva: I think that, throughout my life, I was in the recruitment side, looking for people to make them share our passions, our territories (mountain, diving, karate…). My next inspiration will be more to transmit than to search.
I have traveled around the world several times and I would like (I still don’t know how) to invest in a place, a “refuge” to welcome and transmit this passion. Instead of looking for people, receiving them and teaching them modestly the mountain. The mountain has values and we must be careful because we can lose them quickly. The mountain is inspiring, but we need informants, people who enlighten our visitors, so that they realize the opportunity they have to be in the mountains. The high mountain is a hostile environment (which we used to avoid) and today we must fight to value, preserve and pay attention to what we do for future generations.
I’ve never ‘worked’: I’ve lived my passion. Otherwise, it wouldn’t have been possible. I live for the mountain. I wish all people could work on their passion, because otherwise I think it must be too hard to work (laughs).
I felt this call from the mountain very young and had no one from my close family who knew the mountain, but I went against all odds. We must listen, listen to its inspiration. I found my Eden up there. By chance, one day I met Gaston Rébuffat, a great mountain climber and high mountain guide from Marseille who was a myth to me. I met him at the age of 19, in a cinema, and he encouraged me to go there. I took my motorbike, went to Chartreuse and stopped in a field from where I saw the city and the mountain. It was dark, I looked at both of them, and decided to go up to the mountain.
You have to find your voice to inspire yourself and then be inspiring. Not only can you be a consumer in your life, at some point you should return it. I try to do it with diving: people have taught me to dive and now I give back what they gave me.
In my family, I didn’t have the means to practice alpine skiing, but some family members invited me to practice alpine skiing. An aunt of mine had a country house in the Col de l’Arselier and that caused things for me. Another aunt invited me to go walk in the summer on the mountains in Queyras. Before that, I didn’t know what it was and, suddenly, new universes were opened. This is very important. There isn’t enough awareness of the influence we can have on teenagers and young adults, as we always think they are in their world, while they are looking for inspiration.
I Love Ski: When you look back, what is your greatest achievement?
Jean-Marc Silva: Personally, my family: we are a united family and I have the pleasure of being the grandfather of four grandchildren. I believe that having raised our children in the mountains has made them healthy, strong, creative and aspiring people. They didn’t have an adolescence problem; They came closer to sports and mountains. Today, each one has two children and it’s a pleasure to see them. But at the same time, it’s a responsibility. I want our grandchildren to live what we have lived, so we are responsible for our actions and the future.
Professionally, I’m quite surprised by what we have achieved in Arcs 1950: starting from nothing, reinventing everything and seeing that today there is this town, which fits perfectly with the landscape and has even become an economic model. They told us: ‘it will never work’. But, when you have convictions, you must assume them. Like my father-in-law when he opened Col du Coq in 1968!
I also hope that our children come to create, because I think it’s very motivating and energizing to open paths. It’s up to mountain people to open paths and, when we can do it, it’s a great satisfaction.
I Love Ski: Where do you see yourself in five years?
Jean-Marc Silva: It seems that one should always go further, higher!
To go higher, I’ll have to end up as a refuge guardian (laughs). I won’t go to work in the city, I’m not interested. I want to continue being in this territory that fascinates me and I’ll be more in search of quality of life.
I still have five years of work before retirement. Then I would like to dedicate myself to one place and be able to inspire others and continue this chain. If I can, I would like to be very humble and modest, be the Gaston Rébuffat of some young people, and tell them what we have lived. It’s a real pleasure to see the young people who have chosen a mountain career because they saw us. Without wanting it, we inspired them. Living in the mountains is more complicated, yes, it’s more difficult. What’s more, it requires more effort. But it’s also a reward. You have to believe in your dreams and make your dreams come true.
I always think about a quote that followed me all my life and that still accompanies me: ‘Where there is a will, there is a way’. When you’re on a mountain, you must find the way, and the exit is always at the top.