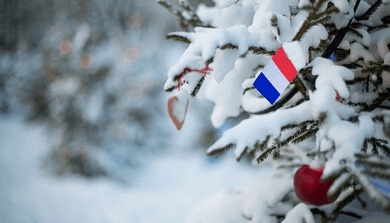 Facebook
Twitter
Traditionally, the French nation has always been closely linked to skiing and snow sports in general. The first Olympic Winter Games were held in Chamonix in 1924, although at that time they did not include alpine skiing. Skiing began to develop in France in the 1930s.
Today, France is undoubtedly one of the most important countries in terms of the ski industry, whether at European or global level, and this is corroborated by the data of the 2019 International Report on Snow & Mountain Tourism, published by Laurent Vanat. According to the report, France is the third country in the world with the largest number of ski resorts, with more than 200. In addition, it’s the country with the highest number of ski lifts worldwide, with more than 3,000. 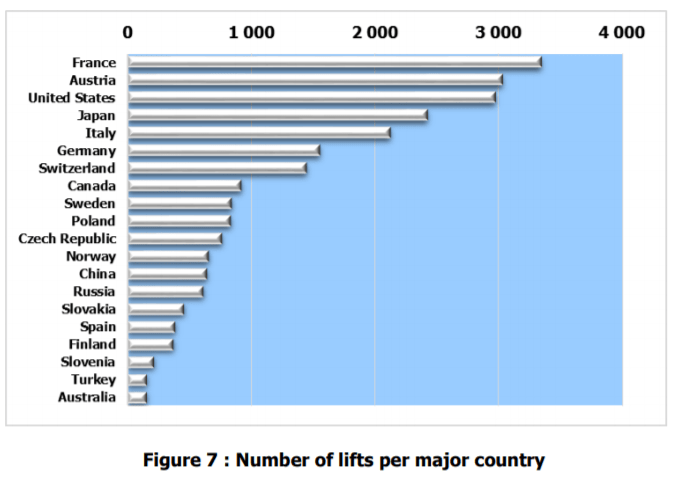 Graph taken from the 2019 International Report on Snow & Mountain Tourism
France is also, along with Austria, one of the only two countries in the world that have more than 10 resorts that generate at least one million ski days per season. In fact, until this year, in which it has been passed by the United States, France was since the 2015/2016 season the country with the highest average number of ski days in the last five years. Now it occupies the second place, with an average of more than 53 million skiing days.
Foreign skiers
These figures are partly due to the number of foreign tourists that the French country receives, since it’s one of the three countries that receive the most tourists worldwide, but the only one of them in which tourists make a notable difference in the benefit of the ski resorts, since normally most tourists that go to a country don’t go skiing. More than 70% of skiers in France are foreigners, with around two million foreign skiers who visit the country each winter season. A quarter of them are British. 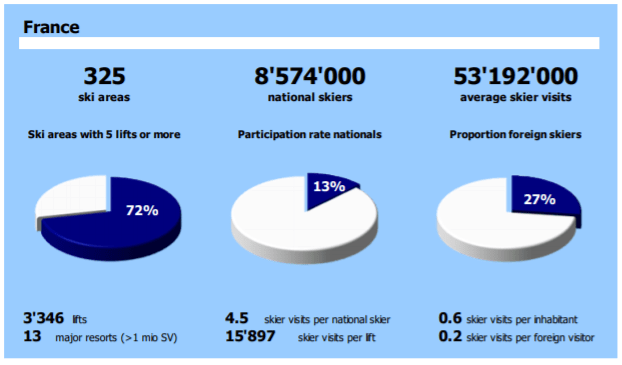 Graph taken from 2019 International Report on Snow & Mountain Tourism
What attracts so many foreign skiers to France? The first thing that makes the country stand out as a snow destination is its orography, specifically the large number of mountain ranges it has, with mountains that reach a great height. France shares with Italy the Mont Blanc, which is the highest peak in the Alps (4,810 meters / 15,781 feet). But, in addition, throughout the country there are a total of 24 peaks that reach an altitude of over 4,000 meters (13,123 ft). These orographic conditions suppose an enormous advantage regarding the amount of snow received in the country and allow it to have a great amount of ski resorts and, therefore, of offer.
The spot where France is located is also a great advantage, due to its proximity to a large number of European countries and especially to the United Kingdom, where many skiers come from. Both its topography and its strategic location make France a very desirable destination for skiers from all over Europe and around the world.