I Love Ski ®
Home News Courmayeur: the top of the Alps 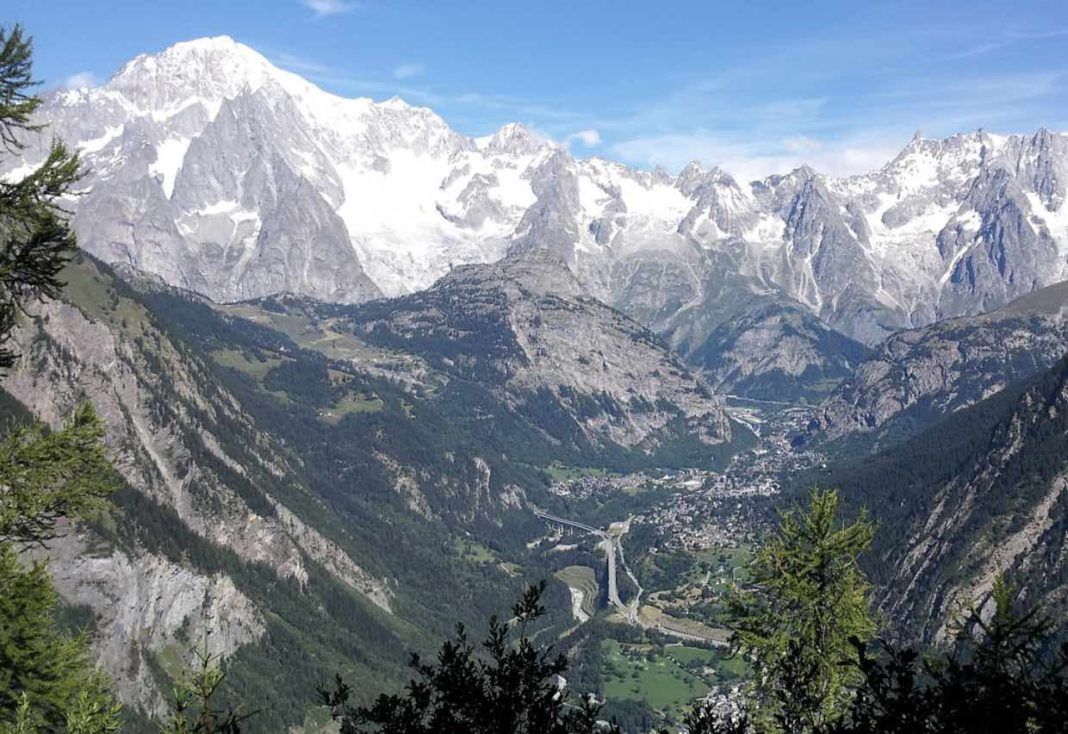 About the Courmayeur ski area

The Courmayeur Mont Blanc ski area is composed by the resorts of Courmayeur, Dolonne and Entrèves. This great ski area has 18 ski lifts and 33 slopes. But if there is something that makes it stand out from the rest of the ski áreas, it’s the presence of Mont Blanc (or Monte Bianco), the highest mountain in the Alps, with its imposing 4,810 meters (17,781 ft) height. In these ski area, the slopes orientation and the great height guarantee a great quantity and quality of the snow from the very beginning to until the end of the season.
Out of its 33 slopes, 11 are blue, 17 red and 5 black. The total length of its slopes is 42 kilometers (26 mi), although they reach 100 km (62 mi) with the off-piste. If necessary, the ski area is well prepared for the production of artificial snow, since it has 280 snow cannons that are capable of covering 70% of the surface. It also has a snowpark, the Aretu area, at an altitude of 2,000 meters (6,562 ft).
Photo: Courmayeur Mont Blanc

I Love Ski has spoken with the General Manager of the complex, Danilo Chatrian, who has told us about the origins of Courmayeur: ‘The resort was born and lives in the shadow of the «Tetto d’Europa» (Roof of Europe) and, together with the sister resort of Chamonix, it saw the birth of skiing and mountaineering’.  Since 1965, the creation of the Mont Blanc Tunnel, an impressive engineering work that connects France and Italy under the mountain and joins its two slopes, has turned Courmayeur into one of the communication axes that cross the Northern Alps, transforming the Mont Blanc in an unitary destination.
Being a very international area and the top of the alps, it can be reached easily from the North, in less than two hours from the Geneva airport, and from the South, with the airports of Milano Malpensa and Torino Caselle in an hour and a half.
Courmayeur enjoys worldwide fame, attracting ski enthusiasts from all over the world, but it’s also a place known for being exclusive, glamorous and frequented by the Italian high society, since the beginning of the last century: ‘Since the Postwar period, the frequentation of the families of the Milanese upper bourgeoisie and in general of northern Italy have made the town known as an exclusive destination. The beauty and majesty of the landscape has been joined by a high level of services and restoration,’ says Danilo Chatrian.

The top of the Alps: Constant innovation

The complex is also known for its innovation and has just inaugurated its Skyway funicular, a display of technological innovation that renews and enhances the funiculars built in the 50s by Count Lora Totino to unite Courmayeur and Chamonix, flying over the Mont Blanc glaciers. With this new mechanical lift, the 3,500 meters (11,483 ft) of height of the Heibronner Point are reached, in the center of the massif.
Despite being one of the oldest ski areas in Italy, it has been constantly renovated and both its ski lifts and its slopes are modern and fast. According to Danilo Chatrian, currently, the future projects of the complex are oriented to the upper part of the ski area: ‘Last winter, we inaugurated two new slopes in that area and we are in the process of remaking and strengthening the funiculars that lead to the summit of the complex. From them, you can access numerous freeride areas with magnificent views. Courmayeur has hosted four editions of the Freeride World Tour.‘
‘This last winter season has been optimal, with good snow and especially a lot of sun,’ says Danilo Chatrian. Courmayeur will close its doors on April 22, with around 480,000 ski days and a volume of activity over 15 million euros.
There are no words to describe this magnificent ski area that crowns the Alps. As Danilo Chatrian says, ‘Mont Blanc is pure emotion: if it’s not tested, it can’t be described…’