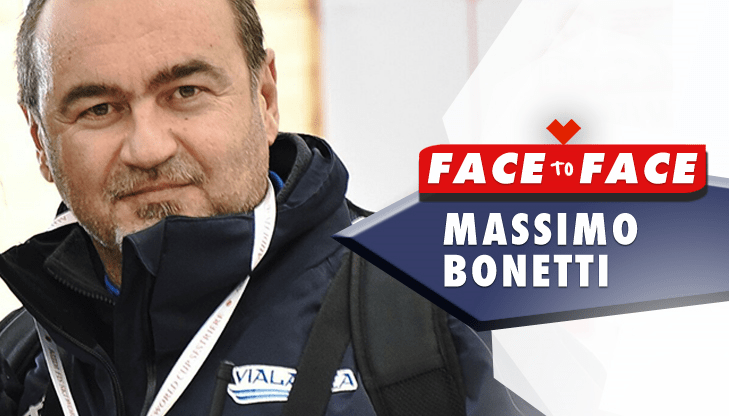 Facebook
Twitter
Despite having a busy schedule, Massimo Bonetti receives us with his characteristic kindness and joy. Behind him, an intense and satisfying professional career in the world of snow and an impressive curriculum. We ask him about his professional evolution and his motivations.

What were the beginnings of your professional career? Where does your passion for the mountain come from?

Massimo Bonetti: I was born and raised here in Sestriere, so I have had a passion for the mountains since I was very young. I have always lived next to the ski slopes and in contact with tourism, so I was practically born with this inside.

And how did you start working in this whole world?

Massimo Bonetti: I started working on tourism, skiing and this kind of thing in 1996, here in Sestriere. I started collaborating in the organization of the Alpine Ski World Championships that would take place the following year, in 1997.
I started as a guardian in the press office. I took care of letting people into the office, turning on the lights, making sure the plugs worked, installing the first lines of the internet for journalists… All that kind of stuff. In 1997, I began to work at the slopes, taking care of the organization of the ski resorts; first, in the organization of the Italian championships and then, always going further, in the organization of the European Cup, the World Cup… That’s how I started working within this entire organization.
In 1998, I started working in the marketing office and being responsible of the commercial relations and the marketing of the facilities. Afterwards, I started working on everything related to making contracts with the major tour operators, so the whole contracting of the ski passes, advertising, as well as participation in fairs, conferences, seminars, etc.
After a while I became responsible for all contracts for tour operators and ski clubs. I continued forward and ended up being the head of the office. In 2004 I was contacted by the mayor of Sestriere and I became the mayor’s tourist consultant for the institutional relations of the municipality. In 2014 I also became responsible for the big events. Meanwhile, I continued to do my job, until in 2015 I was elected president of the Via Lattea Tourism Consortium. Since then, I have been involved in promotion, management and relations with hotels, journalists, TV stations…
In 2016 I also became the general manager of the Organizing Committee of the World Cup.

Is it difficult to reconcile your position as general manager of the Organizing Committee of the World Cup with the presidency of the Via Lattea Tourism Consortium?

Massimo Bonetti: It’s true that they are two big things. Being the president of Via Lattea Consortium takes up a lot of time throughout the year, because in the summer we work for the winter and in the winter we work for the summer. And being the manager of the World Cup is something much more concentrated, so when it is necessary to work on it, I tend to be much more tired. There is a lot to do, but time is limited. You work on it for around ten months or a year, but in the end you get to put together all the different activities.
But working that much leaves me very little time to be with my family. Unfortunately, all this work doesn’t leave much time for both family and friends. But, on the other hand, I feel an enormous satisfaction for being able to do the work I do, both the organization of the World Cup and the Tourism Consortium, which are complementary things. I work for the same goal: trying to contribute some more to Sestriere and Via Lattea in general. It is a very “heavy” effort, as we usually say, but it also gives great satisfaction.

And speaking of that satisfaction, what are your motivations? Is that what makes you get up in the morning?

Massimo Bonetti: Yes, as I told you, it’s the desire to get involved, to always do something new, to always have new stimuli to try to be better and to make my contribution to my town and my mountains and make the whole territory always better. It is a continuous stimulus.

What has been your greatest professional success?

Massimo Bonetti: What has touched my heart the most is something that took place during the organization of the last women’s and men’s World Cup that we did here in Sestriere in 2016, in which I was the general manager. For the first time in the history of the World Cups in Sestriere, and we have done many, we got 20,000 people to come to Sestriere to see the World Cup. Normally, we used to have 1,000, 1,500 or 2,000 attendees at the most. It was then when the International Ski Federation (FIS) decided to take our commission as an organizational model to show it to all the other organizing committees of the World Cup. They brought a photographer to the slopes so that, for three days, he could take pictures of all the slopes, the stands, the accesses, the technical areas… All in order to have the other resorts take us as an example of how to organize a World Cup in an optimal way. That was without a doubt a huge satisfaction for me.