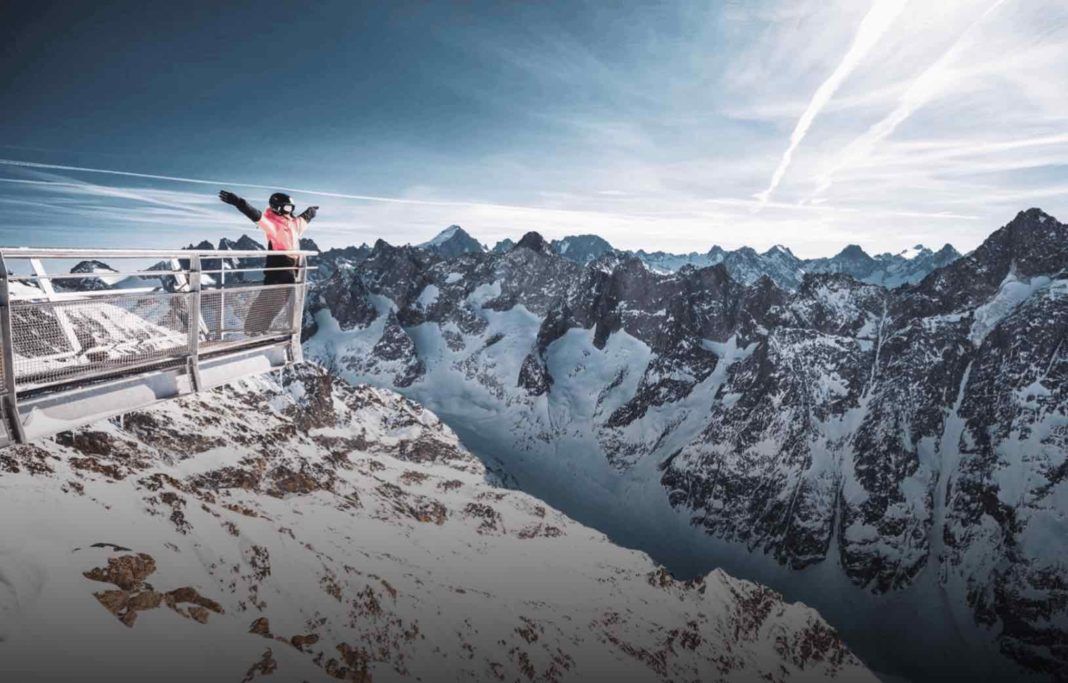 Facebook
Twitter
Photo: Les Deux Alpes
To plan for the future, the municipalities have thought of an early termination of the Public Service Delegation (DSP) with a new tender for December 2020.
The Compagnie des Alpes group is clearly a candidate for the succession, especially regarding the other actors. The entrance ticket will be of 50 million euros, a non-amortized amount of return of goods.
Antoine Pirio, director of Deux Alpes Loisirs, informs us about CDA’s commitment to the ski resort and the ski area: ” We believe in the destination of Les Deux Alpes and we want to be there to transform it, both in terms of facilities and services. We want to be the driving force of the destination.”

“We have an exceptional product and we have not exploited it in terms of infrastructure. We have many things to do, especially at the reception of the pedestrian public. Up there, the views are magnificent, over the mountain range of the Ecrins.”

With nearly 450 employees in high season and a turnover of around 40 million euros per season, Les Deux Alpes Loisirs measures what is at stake in the coming years: “Just as we were pioneers at the time, and today we’re not, we must transform ourselves, ” says Antoine Pirio.
The investment projects of Les Deux Alpes refer to the ski area as well as the resort, with the creation of new housing and the support in structuring projects.

A transformation of the ski area Les Deux Alpes

Installation of new mechanical lifts, dismantling of old machinery… ” We are fulfilling what was planned, with the investment commitments to be made. This year’s major project will undoubtedly be the installation of a new gondola lift to offer more skiing, a large facility that will pass through the area of the Combe de Challence, with an expected arrival at 3,200 meters (10,500 feet). This is an installation that must be put into service at the beginning of the winter of 2019/2020. We’re improving the rationalization of the ski area and discovering new ski areas ” , explains Antoine Pirio.
This large amount of investments in the ski area can lead to inconveniences for customers: ” We are in a transition phase, dismantling old devices to install new ones. It may be a nuisance for some clients, but we will soon see the fruits of this evolution “.

A strong bet on artificial snow

Between 2019 and 2021, the Deux Alpes resort plans to lead a major project to extend its artificial snow network.
Currently, it is one of the Compagnie des Alpes resorts with the lowest rate of artificial snow coverage. This is a major problem, considering that snow is the business of the resort. The goal is to guarantee a minimum coverage of 30% of the surface of the ski area with artificial snow in the long term.
The extension of the artificial snow network is accompanied by the creation of the reservoir of the Mura mountain and the associated pumping rooms, but also by the extension of the networks between the Crêtes area (2,100 m / 6,890 ft) and the grand Nord (2,600 m / 8,530 ft).

The creation of new accommodation

Les Deux Alpes has an important real estate project, both in the creation of new homes and in the rehabilitation of recreational real estate. A creation of occupied appartments and a conversion of empty appartments into occupied ones that should allow a total of 3,500 additional accommodation spots for Les 2 Alpes, or 33,000 spots for tourists. Villages Clubs du Soleil was also established in 2018 at the village level 1800 with the creation of almost 260 rooms.
“The creation of new accommodation spots is strategic for us because it is a new source of income and, therefore, a way to sustain our work tool “, says Antoine Pirio.

New equipment and services in a destination for the 4 seasons

The projects for the transformation of the ski area and the real estate projects also include new equipment and services at the resort: parking, public transport, aquatic entertainment center, fiber optics, etc.
“We must also offer new activities for the end of the season and during the summer period. The customers of the summer months represent great potential, but we don’t promote it enough. We have an important activity in the summer, which is mountain biking, but we don’t work much on contemplative tourism and the reception of clients. We must modernize our offer and sell it better to attract new customers ” tells us Antoine Pirio.

“We have an exceptional product and we have not exploited it in terms of infrastructure. We have many things to do, especially at the reception of the pedestrian public. Up there, the views are magnificent, over the mountain range of the Ecrins. “
When we talk about the climatic disturbance and the melting of Les Deux Alpes glacier, Antoine Pirio answers us with precision: “I invite all climate skeptics to come and see what is happening on our glacier. We have a glacier in recession. We put a lot of effort into preserving this glacier and it is a great effort made by our employees to preserve the environment. “
“Two years ago, we installed snow cannons on the glacier, using the water from a lake that had been created naturally. We recovered that water that had melted to preserve the snow and stop the melting of the glacier. Then, that naturally created lake also drained naturally. Today we no longer have the water resource. It was a test, a bet with very convincing results. In general, we are very attentive to the environment; we have launched an environmental observatory, through which we control all protected species, especially in sensitive areas. Personally, I am sensitive to climate change, and I think we should go further. “

Photo: Les Deux Alpes Glacier – Facebook
A connection with Alpe d’Huez?
Les Deux Alpes and Alpe d’Huez are two resorts managed by two different operators: a situation that entails a certain complexity in the management of a project as structured as that of joining the two ski areas.
The joint project is currently carried out by the communities and it does not enter the Public Service Delegation. It is a project that does not seem to fully convince the operator of Compagnie des Alpes: “In general, we are favorable to the creation of links between ski areas, as we have shown with the creation of the Vanoise Express cable car between Les Arcs and La Plagne. But we must be vigilant, so that these expensive facilities are built in the interest of our customers. A peak-to-peak link could make sense to move from one domain to the other quickly. The version currently being studied is going through different connections, so from the point of view of the client, it’s not as relevant “, explains Antoine Pirio.
The construction of the future link between Alpe d’Huez and Les 2 Alpes would be between the towns of Auris and Mont de Lans; The route between Mont de Lans, the resort, and the peaks of Les 2 Alpes will also be redesigned. It is planned that the old Mont de Lans chairlift with two seats will be replaced by a cable car for the town of 1,800 and the Crêtes sector (2,100 m / 6,890 ft).