If there is an obvious advantage with which the Navacerrada resort counts, it’s its proximity to the Spanish capital. The Port of Navacerrada is not only very close to Madrid, but also has a really easy access. You can reach the slopes both by car, since it has a large parking lot, as well as with public transport, with regular bus and train lines that arrive right at the port’s station. In addition, a bus line has just been added to reach the port from the city of Segovia, also nearby.
Getting to the port is very simple, especially for people who live in Madrid, but also for the millions of tourists who visit the city every winter. It’s also a especially convenient resort to go to with children, since it doesn’t involve the complications of a long and complicated trip with the little ones of the house.

Part of the National Park of Sierra del Guadarrama

However, the position in which Navacerrada is located entails other great advantages; for example, the fact that it’s part of the National Park of Sierra del Guadarrama, which has unique ecosystems of high Mediterranean mountain. This area has an unique vegetation and fauna, with a total of 1280 species, of which 13 are in danger of extinction. In the area there are abundant aquatic birds, large birds of prey and mammals, such as deer, hares, wild boars, Iberian wolves, mountain goats, badgers, foxes or wild cats.
This huge natural barrier has a lot of history. Already in the Middle Ages, the mountain range was known as the “Dragon mountain range“, due to the silhouette that the Siete Picos mountains form. Throughout the centuries, it was also the scene of numerous battles during the different wars that took place in Spain, such as the battle of Somosierra, in 1808, in whose memory there is a monument in the Port of Somosierra. 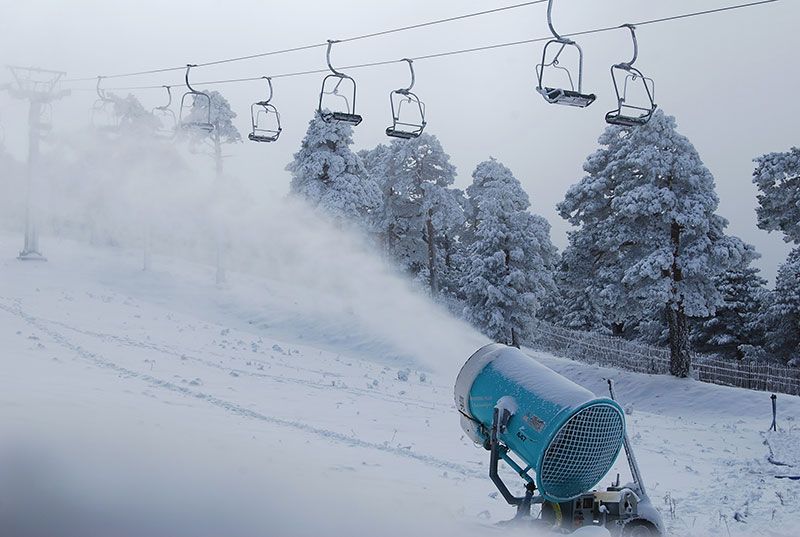 Photo: Ayuntamiento de Cercedilla
The Port of Navacerrada is one of the three ski resorts in the Sierra de Guadarrama National Park, in addition to the closest resort to Madrid, and is one of the main tourist and mountaineering centers in the área. It’s the starting point of several high mountain paths.
Although the weather conditions have not been favorable this season, the resort remains open thanks to its artificial snow cannons, with great offers on its ski passes. For example, every Monday during the off-season, you can enjoy the White Mondays, with a 40% discount on all full-day ski passes.
The closing date of the ski resort is not confirmed yet, but now that the end of the winter season is approaching, what better time to take advantage of the last days of snow in the Port of Navacerrada?
More information at http://www.puertonavacerrada.com/