I Love Ski ®
Home News Val Gardena: the paradise of the Dolomites 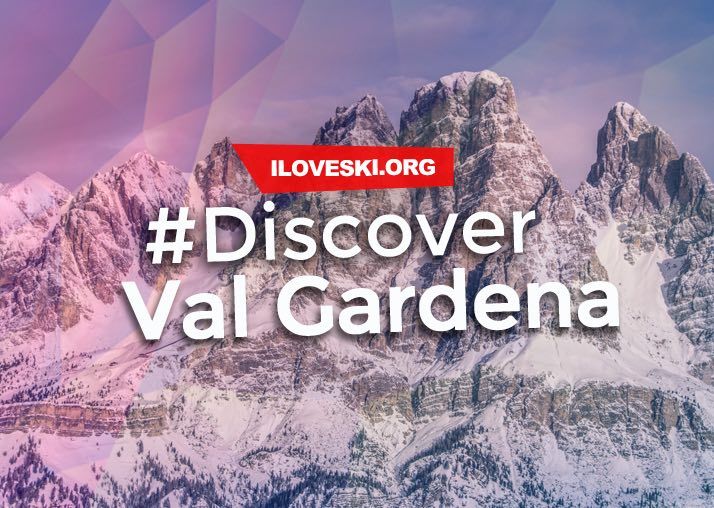 Val Gardena is part of the Dolomiti Superski compound of ski areas, formed by twelve resorts and 1200 kilometers (746 miles) of slopes. A dream destination that all those who are passionate about the snow should visit at least once in their lives. Note that in this ski area we can find suitable tracks for all levels, but if we have to highlight something in capital letters, it is the beauty of its landscapes.

Val Gardena: a ski resort that is part of the world’s history

Its mountains and valleys have seen the passing of many relevant events in history, such as World War I. As you can imagine, between 1915 and 1918, one of the most bloody episodes of World War I, also known as the Great War, was fought in the Dolomites.
The Italian and the Austro-Hungarian armies fought in these rugged mountains, as part of a bloody war. Frequent battles, severe winter temperatures, the risk of avalanches and the climatic conditions tested the resistance of the soldiers, while the rugged alpine mountains watched as defensive ditches, poles, fortresses, barracks and tunnels were dug into the rock and built. In recent years these historic artifacts have been restored and today there are many paths and museums that can be visited to keep the memory of those years alive and provide to those who visit the opportunity to understand what happened in one of the saddest periods of modern history.
This terrible history that involves the valley contrasts radically with the beauty of the unique natural environment represented by these immense mountains that rise like watchtowers in one of the most emblematic places of the Italian Alps.
Its fabulous snow conditions and the possibility of skiing always in sunny areas depending on the time, will allow us to enjoy an emblematic ski area. One of those places that leave a mark on the skier. 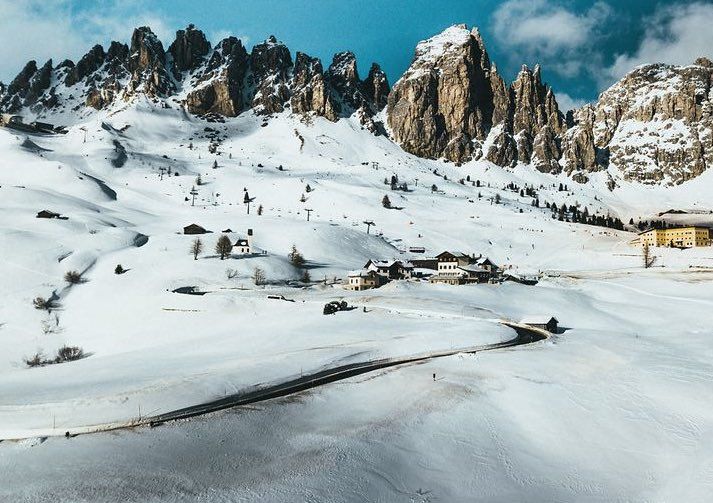 This huge ski area currently has very favorable snow conditions, with more than 80 cm (31 inches) at the base and 140 cm (55 inches) at high levels, 168 open slopes and 78 working lifts. A paradise for those skiers who wish to go sightseeing on their skis, enjoying one of the most beautiful mountain landscapes in Europe.
“We can guarantee that the slopes of Val Gardena will have snow until the end of the winter season, which this year ends on April 7, since 98% of the slopes can be covered with artificial snow if necessary”, explains Christina Demetz, communication manager of the Val Gardena resort, in an exclusive interview with ILOVESKI.

The resort is also part of the Sellaronda, one of the most spectacular ski routes in the Alps, which surrounds the Sella mountain range and can be done in two directions, passing through different tracks.
“The ski area of Val Gardena / Alpe di Siusi includes the Sellaronda as part of its 500 kilometers (311 miles) of slopes, perfectly prepared for the most passionate skiers. The world-famous Sellaronda allows you to enjoy while sliding on your skis along 26 kilometers (16 miles) of tracks that offer breathtaking views of the Dolomites. It’s a difficult temptation to resist”, says Christina Demetz. It is worth it to take it easy, enjoy the views and the surroundings, taste the rich gastronomy or make a good photographic report. 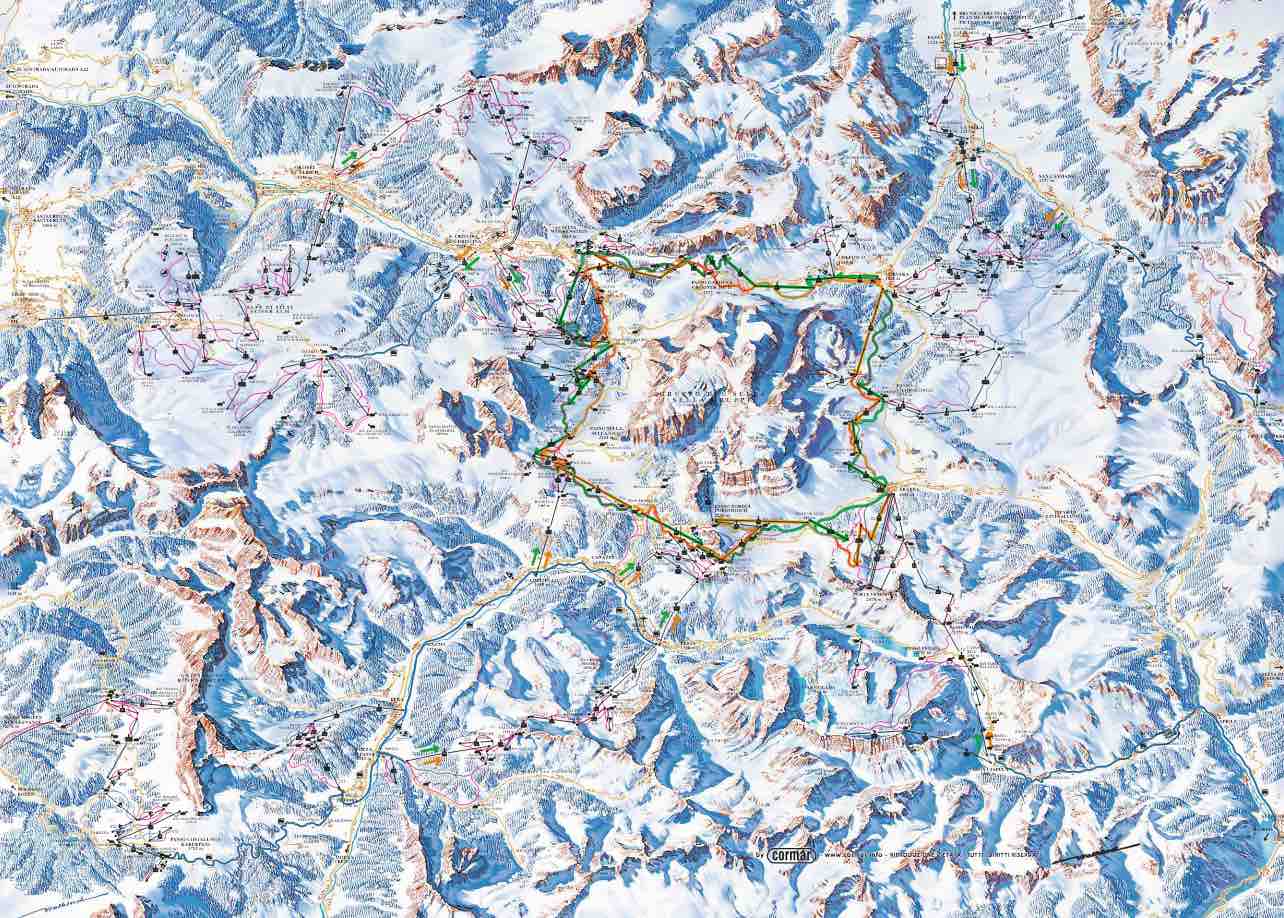 A route that allows you to enjoy one of the most photographed landscapes in the Italian Alps, with mountain formations as unusual as the Sassolungo del Passo de Sella, the Dantercepies or the “Stone City”. Along its 42 km (26 mi) you’ll cross four valleys or areas: Val Di Fassa, Arabba, Alta Badia and Val Gardena. The link between one valley and another is made through four passages that communicate all the accesses and make a circular route, returning to the starting point comfortably:
– Campolongo Pass, accessible from Arabba and Alta Badia
– Paso Pordoi, between Val Di Fassa and Arabba
– Gardena Pass, which connects the areas of Alta Badia and Val Gardena
– Sella Pass, which connects Val Gardena and Val Di Fassa

Val Gardena is known worldwide as one of the leading winter sports resorts in the South Tyrol Dolomites since the Ski World Championship was held there in 1970. Today, it continues to host world competitions at its legendary Saslong track.
But the area is not only ideal for skiing. Amongst other facilities, it has multiple snowshoe trails, sled runs (including the longest sled run of the Dolomites) and four frozen waterfalls for ice climbing. 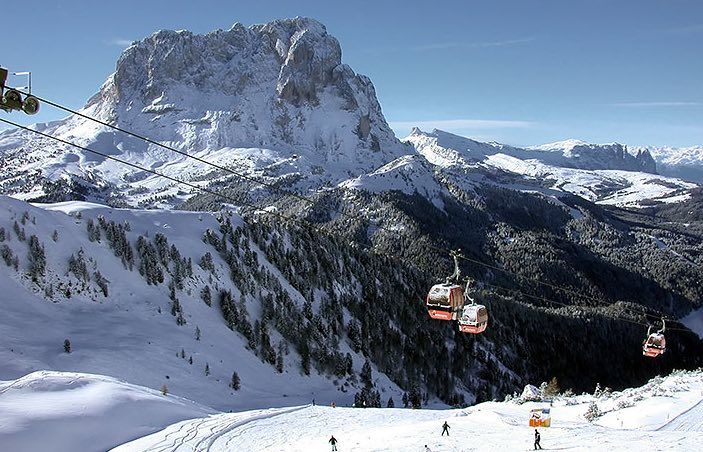 The impressive beauty of the Dolomites

The valley, besides being a paradise for winter sports, is a World Heritage Site according to UNESCO because of its beauty and its uniqueness. That is why the resort prioritizes the sustainability and protection of the unique place where it’s located: the Dolomites.
The resort works throughout the year. After the winter season, the landscape of colossal mountains covered by a white blanket is transformed into green hills and the slopes are perfectly adapted to practice different mountain sports outside, such as mountain cycling or hiking through its multiple routes. 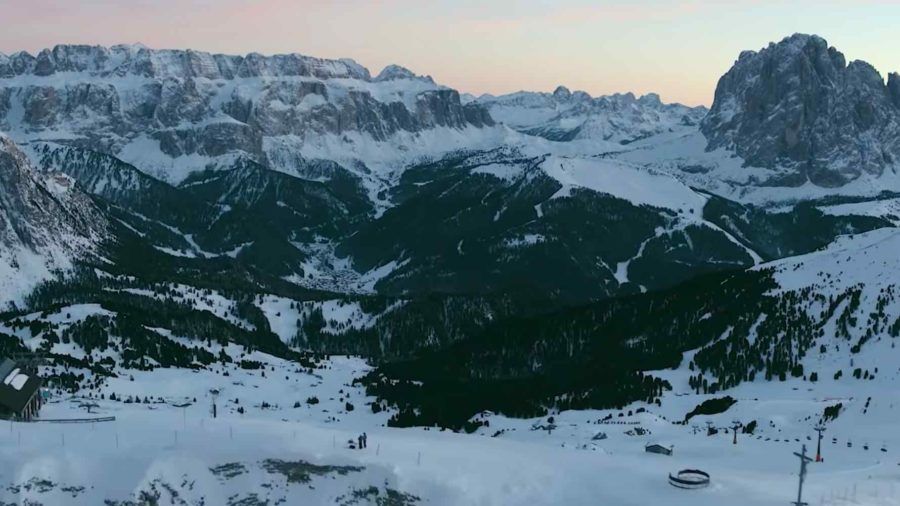 Val Gardena: an international resort for all tastes

The international fame of the resort is the reason why its Italian customers account for only around 30% of the total. Another 30% of its customers are Germans and the remaining 40% are other international customers, mainly from the Netherlands, Great Britain, Scandinavia and Russia.
The great amount of slopes for all levels that Val Gardena has makes it the perfect resort for all types of skiers, from beginners to professionals.
As Christina Demetz says, “it’s easy to be seduced by the special atmosphere of Val Gardena. The beauty of the valley, the friendliness of its inhabitants and the good food are a guarantee for an eventful holiday.”