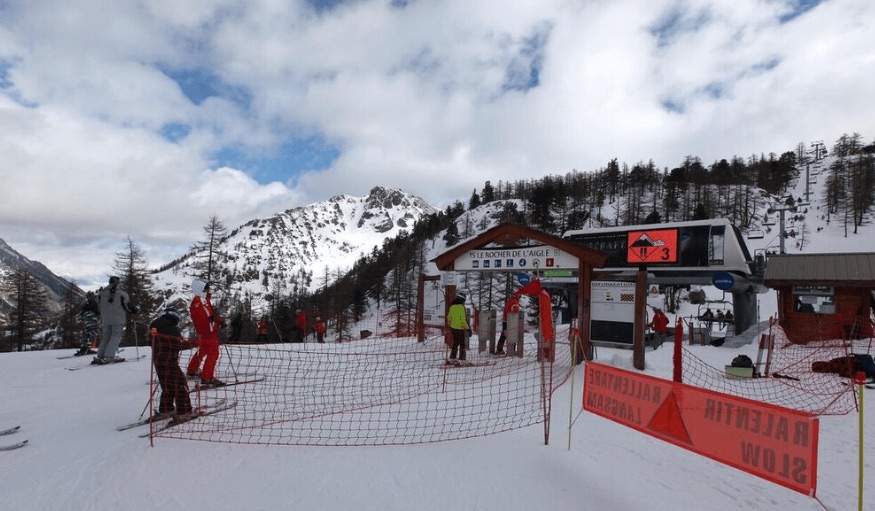 Regulation related to risks of avalanche assessments is completely changing. Sometimes is has been considered as being too much simple and not representative of the danger, with only 3 flags (a plain yellow, a black and yellow chequered and a plain black).

Since the visit on the previous month of March of the French Minister of Sports, Thierry Braillard to the domain of Montgenèvre, the French National Association of Mayors in Ski Resorts and the French Domains gathered in order to judge the effectiveness of the current system (using flags)

Since the 26th of February, a slab of 1mX60cm has been intelled at the start of the chairlift Rocher de l’Aigle, on the domain of Montgenèvre.

This location is strategic because many skiers go through this point in order to ascend to the summit of the domain. This technological innovation definitely attracts the attention of skiers. The digital signage is directly operated by the service of the ski lifts to be updated all day and to be as faithful to the reality as possible.

The pictogram created go from the number 1, with the weaker rik, until number 5, with high risk.

This new signalling has being studied for improving the understanding and searching to harmonize these marking in Europe.

The current system, using flags, is a French scheme. 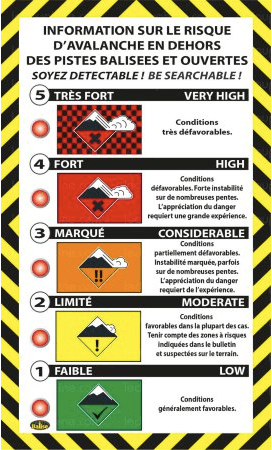 The new singalling is realised thanks to Météo France in collaboration with mountain professionals.

A quick ride over Montgenèvre  domain

Heavy snow arrived since last Friday in Montgenèvre, and it’s determined to stay. In fact, during the night of sunday, with around 30 cm of snow. The forecast announce some extra 30 cm of snowpack for this week. A total of 81 slopes are opened on the domain of Via Lattea.

However, the risk of avalanche is level 3 “marked”. This level, in terms of avalanche risk, is considered as the most deadly. It used to be pointed with a black and yellow chequered flag, the new system allows to explain more clearly to the skiers that this level is dangerous through an eye-catching orange, with universal connotations. It’s therefore much more revealing that the flag system.

This 10 ski resorts will establish a conclusion about the efficiency of this new system, setting the future of the AFNOR regulation.

What do you think about this new signalling system?

James Niehues, the “Michelangelo of snow”

Why do the dates of the Easter holidays change every year?