Olympic Games organization is already underway and, although China is not a benchmark in winter sports, a great difference in level in snow sports with developed countries must be recognized. In fact, China is quite a competitive country in ice sports and thanks to these Games, we are sure that it will become a ski powerhouse.

Chinese ski resorts are mostly locates in the north and very different levels of development, in some cases training can be organized but in other cases they can only offer the basic service to beginners.

One of the first reasons is that China has a geographical and climatological limitation: in many countries the weather is very favorable to practice ski, in China only some towns have good snow conditions and good altitude levels. 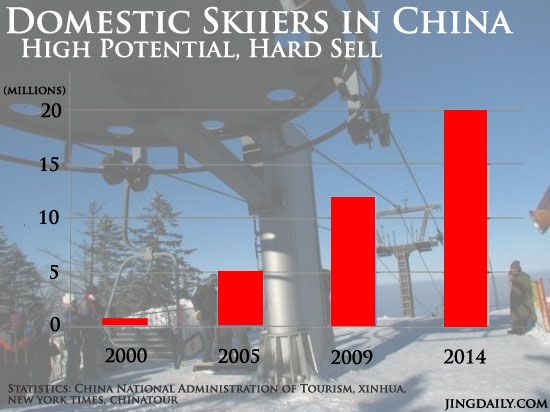 Even though China does not have any culture or history about winter sports, the candidate of Beijing was likes for his low cost (3,06 millions of dollars or 2,76 millions of euros) in comparison with the games in 2008. Many installations of 2008 will be used again like the “bird nest” (olympic stadium) where the opening and closing apertures are celebrated the “cube” (the olympic pool transformed in a skating track for the ice sports) and the olympic city. The project has as the principal object the development of the snow market “ in benefice of more than 300 million people that live in the north of China” the candidate from China comment.

In a video message, the president of China, Xi Jinping said that the government strongly supports and promise fantastic games. This olympic games pretend to promote the change and mutual knowledge in between the Chinese and other civilization of the world” the president said for the ones that play they will animate more than 1.3 million of chineses to play the winter sports.

Nowadays, China does not have infrastructures to organize events in such a tall level and in the outsides. Meanwhile the plan is to create new stations of winter sports(for alpino ski competitions) in the region of Yanqing located like 200 kilometers of Pekin. The ski events will be in the part of the mountain called “xiao hai tuo shan” this zone is really mysterious to everyone in the world because is a place protected and with an altitude of 2242 meters.  The commission of China has promised that the construction of this station will not affect the environment and in fact it will supported and respect it. The zone of Xiao hai tou was chosen because his vertical  out of level  of 800 m and the weather of this zone.

Olympic Games organization in China is on the go, with the launch of the first consultations for the creation of this new stations of ski. One of the major  problems is the lack of snow in this region and the necessity of using artificial snow, that consumes a lot of water, a very controversial topic because this natural resource is really rare in Beijing.

China is not a referent in winter sports, with really little tradition in this sport. A few professional ski athletes and also the lack of trainers is very severe. The country won his first silver medal in the olympic games in Albertville in 1992 and their first gold medal in the olympic games in Salt Lake City in 2002. Generally is situated around the 12 and 14 place, in the ranking of the medals by country and their best disciplines in sports are the badminton. The development of winter sports are not equilibrated. In the occidental countries the ski is now a way of living meanwhile in China is at the first stage.

The winter sport: a new way for China to develop

The organization of the olympic games is a real level of development for this great country and its 1.3 million people (a quarter of the world population). The skiing is very underdeveloped despite an environment conducive to the practice of this discipline in mountainous terrain .

The development of the ski resorts of Yanqing and Zhangjiakou in north-western China should contribute to this development.

In fact, winter sports resorts are currently in the northeast region of China, Russia and North Korea . The northern region which has more than 300 million people  will benefit from this development, including Hebei Province located around the capital.

Building a high-speed rail line will allow more easily and more quickly access this rural area northwest of Beijing. With this infrastructure  the station Yanqing (where the Alpine skiing, bobsleigh and toboggan be held) located 90 km from the capital is located just 20 minutes by train from the capital, while Zhangjiakou host  the nordic competitions, freestyle and snowboard are  located 174 km from Beijing it will be a 50 minute train ride from the capital.

Freestyle events skiing and snowboarding will be held in the ski resort called “Thaiwoo”, is situated in Chongli, Zhangjiakou, with an altitude of 2160 m , and a favorable climate . Now the station is being built: when the project is completed the station will have 200 tracks spread over a total of 138 km, 38.23km of lifts, allowing you to compete with foreign ski resorts.

Another example of the volunteering every time bigger and bigger from the Chinese government to developed the winter sports: the plan 13( plan renovated every 5 years) includes the creation of a ski resort close to the city of Lhasa, capital and region of the Tibet.