I Love Ski ®
Home News Lack of snow in the French Alps : the Indoor track Snowhall... 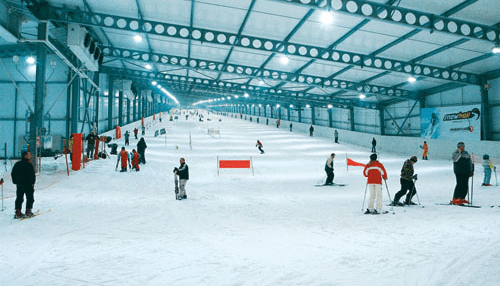 On this day 60 years ago , Europe and France, plunged sharply in a historic wave of intense cold. During the night of January 31 to February 1 , after a few months of December 1955 and January 1956 not that cold , an icy cold hit the French country for several weeks.

This cold snap also caused many important snow falls unevenly spread across the country. Throughout the month of February 1956, the snow reached almost 28 inches in Saint- Tropez and 24 inches in Saint -Raphael.
The west was also affected february 21, when a snowstorm isolated the Aquitaine region, recording about 31 inches of snow on the streets of bordeaux, almost 12 inches in Breast, 8 inches in Lanvéoc and 7 in Caen (source: Météo France)
After a 2015 considered the warmest year since 1880 , the beginning of 2016 follows the same steps with temperatures above normal. Today , snow is missed in the French massifs and especially in the Vosges Mountains.
The ski resort of Lac Blanc , for example was forced to suspend night waiting for new snowfall decreases . They are only open green tracks are located in the upper area of the ski as well as a return to the station on the blue track of the Maze . The ski resort of La Bresse, has 12 inches in the lower part of their domain and 24 inches at the top of their slope ( 1350 m), thanks to the snowfall of the last January 30 . But these difficult snow conditions brings happiness to some, as in the case of Snowhall d’ Amneville, the only indoor ski resort in France.

This year they have a record of assistance of 1300 persons per day.

They have attracted all the frustrated skies that have not been able to enjoy the slip earnest of the mountain.
This is a perfect alternative for all the skies that wish to put on their skies. Especially because the track cover of Snowhall is classify as the longest in Europe.
With a record in 2015 of more than 130.000 visitants, people from different french regions like Alsace ,Champagne Ardennes, Lorraine and even further, they even come from the region of Vosgos and the region of Paris, that is located only 20 minutes away from Metz, 1 hour from Nancy and 2 hours from Strasbourg. Is a perfect alternative to make a excursion to the mountain with your family with a temperature of 36 °F, the Snowhall guarantees snow and fun!
And for those who are not passionate about skiing, why not try the inflatable sled, recently installed on the ski slope?
When it comes to prices, this haven’t been left out ! the Snowhall has a perfect package for wednesday, the family pack day 2 hours for only 22 €. ( one forfait ski for an adult and one free for kids) It is the biggest rival for other forfaits that usually charge 20 € per day only for an adult.
A formula that allows skiing to be an accessible sport, is often considered one of the elitist , especially when you consider the price that corresponds to spend a week with family in the mountains.
Despite the difficulties that are experiencing the seasons of the French Alps , we can be satisfied with the current situation Snowhall , after several threats of closure it now has a stimulus plan of three years granted by the Prefect for recovery of accounts.
The French resort has a great future ahead and Snowhall is an important stimulus for all and all those who wish to discover this discipline or perfect your technique throughout the year.