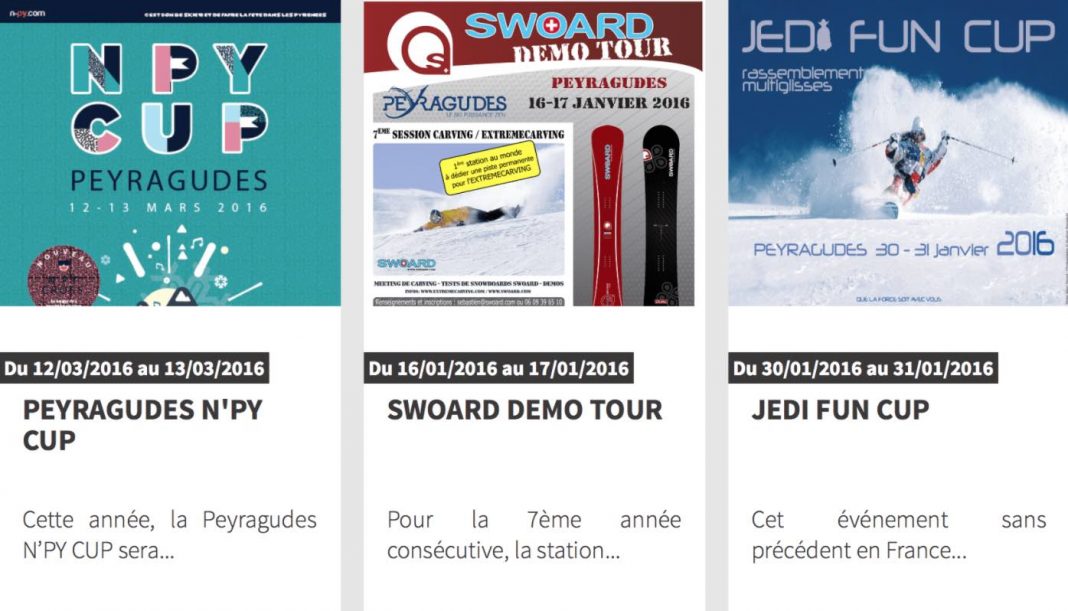 Several important events are planned at the Peyragudes resort this winter:

The French Federation of Mountaineering and Climbing Station organized a meeting at the Peyragudes resort for ski and mountain climbing for a total of two days.
The first day, on Saturday, a ‘Vertical Race” will take place and on Sunday, there will be Departmental and Regional Mountain Skiing Championships. Registration is open to all categories and will count towards the national ranking (License FFME requested).
During those two days, the ski resort offered the chance to use ski mountaineering gear, completely free of charge.

For the seventh consecutive year, Peyragudes ski resort will host the Swoard demo tour. Snowboarders can test the Swoard Snow Extrem Carver designed specifically for turns referred to as carving.
One can get very low to the spectacular snow at vétigo speeds. Extrem Carvin courses will be offered for free early afternoon on Saturday for all who wish to learn this beautiful, spectacular discipline.

Freestyle is THE event for snowboarders youth under 16. From the 4 corners of Europe, competitors will gather for three days to get a passport and to enter the closed circle of snowboard.
This is the first and only event in France, along with 26 other nations.

This unprecedented event in France brings together the greatest champions of snow in the world, as well as Olympic champions, pioneers, photographers and filmmakers of the 80’s.
The goal is to enable all (tourists, residents, fans of snow …) to be able to ski in the company of champions who have previously appeared on television, in movies, or in magazines.
It will be a unique opportunity to meet and talk with them in public. Snowboarding, monoski, Kilometer, telemark and skwal be the disciplines represented.
Philippe Lecadre and Régis Rolland, pioneers of monoski and snowboard, Cathy Breyton, KL ski recordwoman, Xavier Cousseau, KL monoski record holder, Eric Berthon, world champion in moguls, are the attendees already announced.
Animations and all kinds of events will be organized during the two days for all snow lovers

This year, the Peyragudes N’PY CUP will be even sportier and more fun. During the two days, there will be a free team competition (Boardercross), an area with a freestyle slopestyle distances, a village with local food, an evening concert with a DJ and then one day of “Detox” with many activities…
For more information on these events, visit the website of the station for more details.