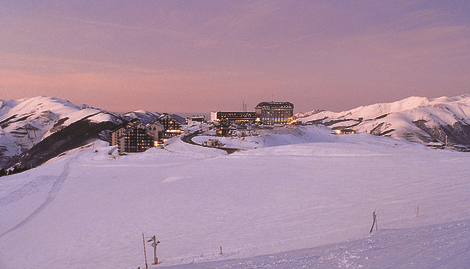 Facebook
Twitter
The construction work of a new detachable chairlift in the resort of Luchon Superbagnères will be launched in June. It is a 2000 meter long new facility which will link the sector of the Lake of Céciré and transporting up to 2800 skiers per hour. The construction will cost €8.3 M.
Next winter, it will be easier for skiers to access the highest zone of the station. The opening is planned for November 2015. This new equipment will be a big change for the station and give access to a larger number of skiers.

Luchon Superbagnères closed its ski slopes on April 6, 2015. The first figures of the last season are very satisfying because they are not lower than the ones of the previous year. This is despite difficult weather conditions: at the beginning of the winter season the snow cover was insufficient and skiing was difficult in the third week of February due to adverse weather conditions.
The station opened for a shorter amount of time only 108 days in the 2014-2015 winter season compared to 122 days the previous year. It also had to close for three days exceptionally because of a thunderstorm.
Despite these difficult weather conditions, the number of daily ski pass sold has increased (+3000) to reach the number of 215 000 compared to 212 000 the previous year. During the first two years of the winter holidays and for the New Year, the station benefited from amazing winter conditions for a perfect holiday.
The turnover of the ski lifts still reaches €4.2 M tax incl, and the daily discount applied several times was very successful (14 euros instead of 31,50). It was meant to balance the days lost at the beginning of December due to insufficient snowfalls.
Because of high temperature, it was difficult to make high quality artificial snow, the amount of water used was half a time smaller than usual (110 000 cubic meters this winter compared to 210 000 cubic meters in 2013-2014).