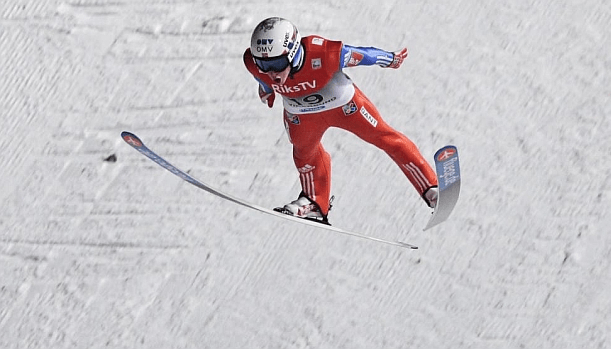 This new ski jumping world record has been registered in Vikersund, Norway, in the first round of Sunday’s World Cup in Ski-Flying.

Fannemel, 23, exceeded that with his first jump but finished second to Severin Freund, at the World Cup event.  The Norwegian, who only managed 202m in the final round, finished 42.7 points behind the winner.

Prevc, whose record-breaking jump also gave him victory in Saturday’s World Cup event, could not repeat that form as he finished 16th with a final jump of just 110m.

Ski jumping is a form of nordic skiing in which athletes descend a take-off ramp, called an inrun, jump, and fly as far as possible. Points are awarded for distance and style. Competition is sanctioned by the International Ski Federation (FIS). Skis are wide and long. Ski jumping is predominantly a winter sport, and has been part of the Winter Olympic Games since their inception in 1924. It can also be performed in summer on artificial surfaces. Ski jumping is a sport originated in Norway.

See the incredible Fannemel’s fly in this video:

Opening of the ski resort of Luchon Superbagneres

The ski helmet hook is the solution everyone has been waiting...

The Tomorrowland 2022 festival is sold out at Alpe d’Huez