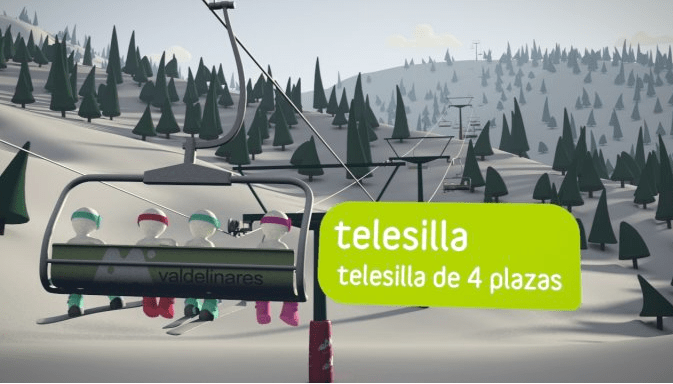 The Board of Directors of Aramón has awarded two new projects to continue with the expansion work of the Aramón Valdelinares ski resort. Aramón is a leading business group in snow and mountain tourism activities that manages the largest skiable area in Spain.

As part of the Aramón project, two tenders have been awarded. The first, the snowmobile network has been given to TECHNOALPIN FRANCE S.A.S., for the value of 1,486,935 euros. The project will provide snow cannons to the three new slopes of the winter center. Thanks to the new scheme, 52 new external mixing cannons will provide coverage to the new slopes, just like the rest of the Valdelinares tracks.

On the other hand, the construction and installation of the new chairlift has been awarded to TELEFÉRICOS Y NIEVE, S.L., to the value of 2,389,885 euros.

The new chairlift, which will start from an elevation of 1,730 meters and reach 1,950 meters, will have the length of almost one kilometer (916 meters) and a drop of 220 meters. Its route will run between the new snow front to the area where the Bolage, Tajera and La Mina slopes converge, with a capacity of 1,800 people per hour.

The board of contracts has evaluated all the technical proposals in relation to the economy of the contract, the construction methodology, machinery and the technical means that will be used, as well as other technical and environmental improvements proposed.

Work on the project, including the Aragon General Interest Project for the expansion of the Aramón Valdelinares ski resort will begin as soon as possible and will last for about four months.

It is a General Interest Project of Aragon, which seeks to improve and expand the facilities of the Teruel winter centers. Some of their goals intend to contribute to energizing the Gúdar Javalambre region, contributing to the economic and social development of the area.

Aramón, Montañas de Aragón, is a company owned by the Government of Aragón and Ibercaja, which is committed to quality and the constant modernization of the ski resorts it manages.

Among the main objectives of the Aramón project is the development of tourism in Aragón.  The group puts a special emphasis on snow tourism: generating business opportunities for private initiative. This will contribute to the economic development of the Community and join efforts in the territorial structuring.

As always the project is being undertake respecting a criteria of maximum consideration for the environment, protection of nature and sustainable development.