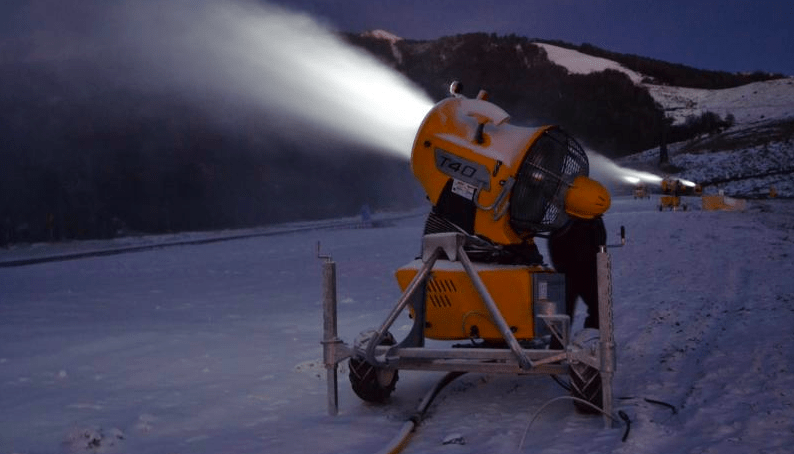 Catedral Alta Patagonia’s company has used for the first time its new snow-blowers which have been installed in Cerro Catedral’s skiing area. Thanks to climatic conditions, around 1000m2 of snow have been created for ski trails. The buying of snow-blowers for a total of one million of dollars, is one of the main investment realised by Catedral Alta Patagonia’s company for the winter season of 2014. Theses snow-blowers will allow to guarantee an important quantity of snow on the 2,5 hectares of the skiing area. Techno Alpin has installed these snow-blowers and thanks to climatic conditions, these have still started to run on. As Cerron Catedral’s technicians said, the temperatures of -2 and -4 degres have allowed to create snow during at least 10h . This new investment represents an important progess for the ski center, after improving the areas for the practice of sports and leisure activities. The snow-blowers are from Techno Alpin brand, model 40. They have a hight level of automatism and centred commands. Four of them have been installed on towers to maximize the snow fabrication, the other are mobile and will allow a flexible utilisation according to requirements. Each snow-blower has an individual weather station which allow to maximize the time of fabrication as since conditions are filled in, the snow-blowers start to produce and adjust the snow quality in conformity with a given program.

Sunscreens for kids. All you need to know to protect them...