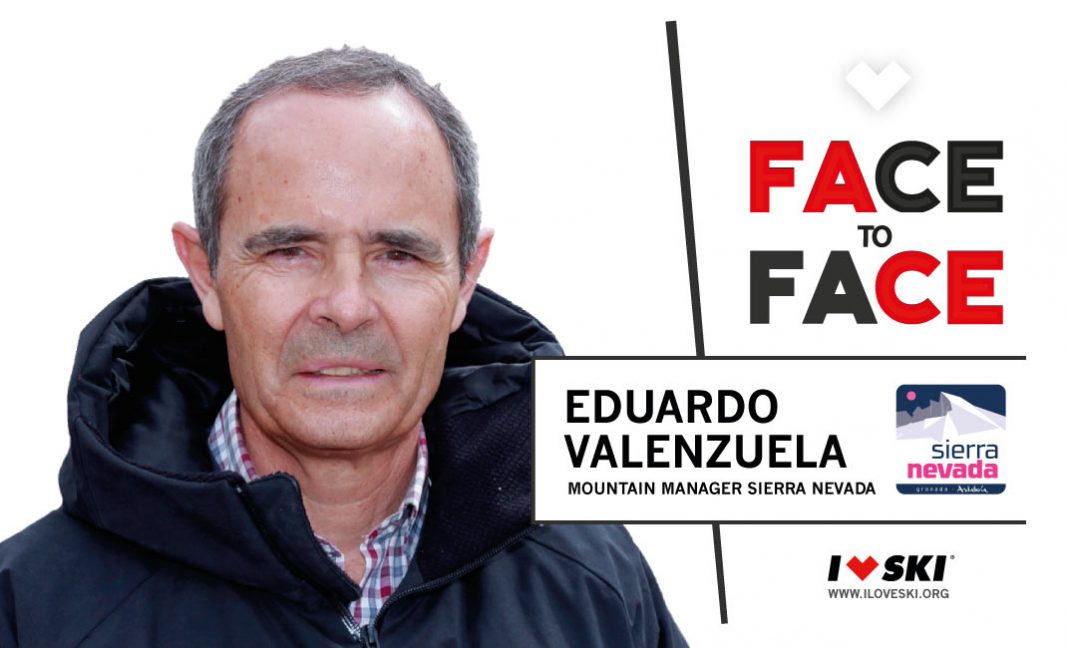 We are delighted to introduce to you Eduardo Valenzuela, director of operations Sierra Nevada. One of the most influential members of Spain’s snow and ski industry. Calm, dynamic and judicious, Eduardo is versed in many languages. Introduced to the snow and mountains at an early age, he still continues to compound professional experience in the sector.

Since 1987 he has been involved with the management of the Sierra Nevada resort as Mountain Director, as well as being a member on the board of the International Ski Federation. His time at the Spanish Olympic Committee, the International Ski Federation, the congress Cimas, the organization Atudem, the European Committee for Standardization TC 242, and the Juveman Mountain Club have given him one of the most extensive and prestigious professional trajectories in Spain.

In this interview, he displays his modesty and unpretentiousness. Something that he fails to mention are all the many accolades he has received over the years, such as the Legion of Honor, the silver medal for sporting merit, the bronze medal for civil protection merit …and more.

Thank you, Eduardo Valenzuela, and welcome to the Face to Face section of I LOVE SKI. Can you tell us who you are and what your relation is to the world of snow?

Eduardo Valenzuela: I am the Mountain Director of the Sierra Nevada resort and a member of the International Ski Federation (FIS).

I am among the third generation of skiers in my family. Before the Spanish civil war, one of my great-uncles was part of a small group of enthusiasts who skied the slopes of Sierra Nevada. He went on to be president of the Andalusian Ski and Mountain Federation and also president of the Sierra Nevada company, a mountaineering club that is now over 100 years old. My father, at the end of the civil war, following in his uncle’s footsteps also started skiing and since then, my whole family has continued to enjoy the pastime. My children are, and even soon my grandchildren will also be tied to the snow … in a short time, I will be sixty-five … (laughs)

Why I came to the snow

Basically, I love to ski, that’s the main reason I work here in Sierra Nevada Resort. Professionally, I was very lucky to be able to devote myself to the snow. I started in a mountain club in charge of the snow campaign.  After that, I was a ski instructor and later ran for election.  I won and was elected director of the ski school. During those years, it was the only ski school and it had about a hundred teachers.

I came to the station hand in hand with the then CEO, Gerónimo Páez. I had the chance to participate in a magnificent project that left its mark on all those involved: the Alpine Skiing World Championships. It was a unique opportunity to develop the resort to a level it had never seen before.

At the time, I had the opportunity to learn from the best in the world and my boss was in favor of training people. I spent my time between France, Switzerland, Austria and Canada … so I had no choice but to learn. Now that the end of my career is approaching, I have the opportunity to join a very beautiful project which involves participating on the Council of the International Ski Federation. We can bring ideas to improve the world of sport, all in close connection with the exploitation of snow. A two-way relationship between the two activities that I carried out.

Eduardo Valenzuela, what are your motivations? Why do you get up in the morning?

Eduardo Valenzuela: I get up in the morning because I consider that life is a fight and that the actions we do in that fight constitute what it is to be a human being. So, when we have to face adversities like the ones we are currently experiencing – Covid-19 – you can fall asleep or you can get up to try to improve things a little, just as best one can. Every day I try to set goals for myself, find new ones – even if they’re small – and feel like I’m alive and moving forward.

Do you have other passions?

Eduardo Valenzuela: I love to read and have always been interested in history. I love the French language, I learned it thanks to my grandmother. She studied in a school for French nuns. When I was little, she would sit me on a small chair next to hers and with cards she would teach it to me. There was a card with a drawing of a kitten and underneath it said “The Cat” and another with a puppy that said “The Dog” well … I was not only interested in the language but also the culture and history of France. I recently went there to visit Gothic cathedrals, some were really beautiful.

If you had a wish list for Spanish mountains, what would it be?

Eduardo Valenzuela: To answer this question correctly, it must be put in perspective with the problems that the exploitation of snow pose today. Among all the threats, I would like to highlight climate change and demographic change.

I will start with climate change, which affects ski resorts a considerable amount. This isn’t because the change is taking place mainly in ski resorts, but because they are among the first sectors to suffer the consequences. This is an area in which we must work seriously and provide a suitable response. For example, new technologies that save a lot of energy and facilitate better performance of installations. While this is generally the case in all areas of technology, it has a particular effect on the snow industry.

Secondly, from a business perspective, it is essential to respond to these changes by adapting the offer to new circumstances. And finally, I believe that there is a third point, which is very important and, with which there is a lack of emphasis in Spain: the need to unite all the actors who work in the ski industry, to move forward on a common project and orient us towards the future, with a unified strategy. Obviously, each with its own particularities, but we must all go in the same direction. The ski sector in Spain is quite individualistic and everyone tends to fend for themselves. We are not getting the market effects that we should see precisely because of this weakness that we have.

On the other hand, besides climate change, there is a change in demographics. In Spain, Europe and North America, the age pyramid tends to narrow even in the sector where we – the ski resorts – sell the most, that is to say between ten and thirty years old. For this reason, we must adapt our offer to the whole of society. It must target all age groups, from children to the elderly.

There must also be a balance between the sexes. Having women on the slopes is a very important goal for the snow industry. If at some point men come to ski but women don’t, men will end up abandoning us. It is the natural law of life: girls and boys evolve together. There is also a lot of talk about including the mother of a family, who should have favorable conditions.

The statistics we have indicate that girls often stop skiing and boys keep coming. We must ensure that adolescent girls do not give up practicing the sport, and offer role models that interest them. Now we have someone who works in Sierra Nevada Resort, Maria José Rienda. She is a former runner and former president of the National Sports Council (Consejo Superior de Deportes), … Role models like her are essential in the snow industry. They are very important for the female sector of society to understand that in the snow, they have a place to live, work and have fun.

Eduardo Valenzuela: I don’t know what’s going to happen. I think if we want to keep our businesses we have to be able to adapt to different types of customers. 20 years ago we had a product and the customer had to adapt. Now it’s different. It’s like Noah’s Ark, there are a lot of small animals and you have to adapt to their different behaviors so that they can all live together. We have to adjust our product to the many different customer goals. Currently, the snowpark is very important for young people, we must make sure that pedestrians also benefit from the snow, and that the chairlifts and gondolas are accessible to them.

Competition is another important area: there are parents who want their children to participate in competitive programs. Competition must be part of the operation, and have its place on the facilities, its assigned lines, its special schedules, … so if you want to still be there in 20 years, you have to adapt to the needs of your client.

You are 65 years old, where do you see yourself in a few years?

Eduardo Valenzuela: I don’t know what the future will look like. I love to ski and I would love to continue skiing and also enjoying outdoor activities. All my life I have felt the anguish of having to stay in a closed place without being able to go out all day. That’s why, I hope to enjoy the open air, the mountains and mountain biking. I would love to be able to continue playing those sports for as long as possible. 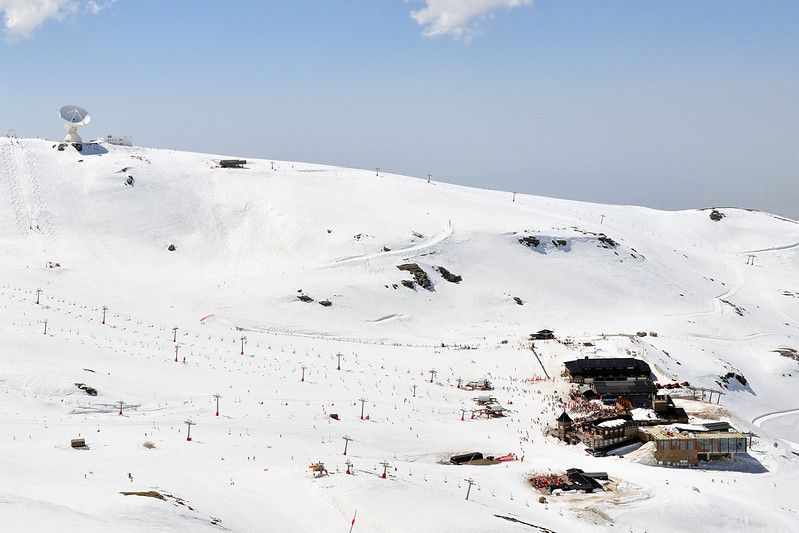