I Love Ski ®
Home News Ski resorts The ski resort of Les Contamines is committed to the European Association... 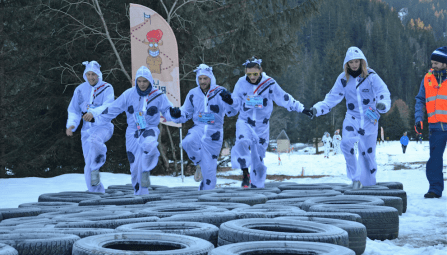 This Saturday, December 12th , a sportive and crazy event was held at Les Contamines-Montjoie ski resort to start the winter season : Rush of the fadas (crazy) near the famous Mont Blanc !

It is an event organized for the benefit of the European Association against Leukodystrophy ( LEA ) , sponsored by the actors of the famous French series ” Plus belle la vie “: Stéphanie Pareja , Pauline BRESSION , Grégory Questel and Julien Bravo .

The “fadas” entirely disguised wen for 8-kilometer long race involving thirty activities and obstacles in mud, snow and even trees !

After three hours of racing that required mental strenght, and teamwork, the “Fadas” finally crossed the finishing line in a crazy atmosphere , laughter and good humor .
Runing, crawling, jumping, sliding , climbing and helping one another, they tried everything to complete the extreme adventure!

The “Fadas” and the Tourist Office Les Contamines have mobilized to donate € 3 per person to the ELA, European Leukodystrophies Association.

The ski resort of Les Contamines-Montjoie opened some of its alpine slopes this Saturday, 12th and Sunday, December 13th and will be open continuously from Saturday, December 18th to Friday, April 22th, 2016 .

Skiing in Money Land: Gstaad, the resort of the rich