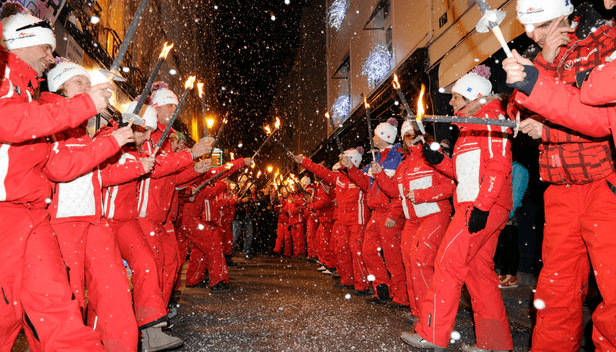 This upcoming Thursday, November 19, the greatest snow feast was scheduled to kick off in Pairs with the event, Saint Germain des Neiges.

A mountain village was to be installed on the Place Saint Sulpice so that Parisians could enjoy the mountain-like atmosphere. Toboggan run, jumps, dog sledding, spas … all the details and activities had been prepared to form a festive winter atmosphere in the capital. Due to the tragic events of Friday, November 13th in Paris, #JesuisParis, and the wave of attacks that terrorized the French capital, the presidents of France Montagnes and French ski schools decided to cancel the 2015 edition of Saint Germain des Neiges.

Due to this fourth edition and the 70th anniversary of the National Union of ski instructors, a great night with a torchlight parade was scheduled on Thursday, November 19th. The expected number of attendees was about 150-200 ski instructors from all over France. This anniversary ceremony is postponed to a later date that has yet to be confirmed. French Ski Schools join the people to show their support to the families and friends of the victims. Sincerely from I LOVE SKI, we send heart to heart condolences to the families of the victims of the bloody attacks that occurred in the capital of France. These acts have left the world’s population in utter shock and sadness regarding such barbarism.

Post-Brexit travel to France & the rest of the EU

Going on vacation to the snow with babies